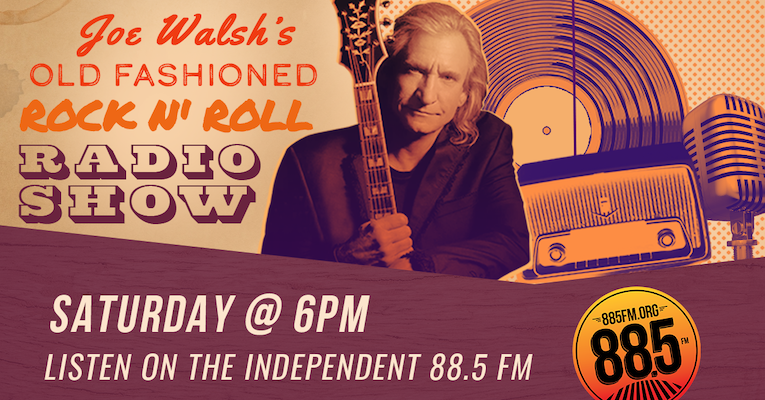 After the pandemic grounded Walsh and his Eagles bandmates from a planned summer tour, the self-proclaimed “Analog Man” was also aware that the virus would make fundraising for the publicly funded station more difficult. He reached out to see how he could help, and offered to host a one-hour show while he was homebound.

“This public radio station serves the community I live in and is funded by listeners,” Walsh said. “I like that men with ties don’t decide what I listen to. My show will be a mixture of music I love, music I think people will want to hear and stories behind some of these songs that I’m pretty sure no one knows about. Hopefully, the show will generate some more listeners and support for the station, and we will have a lot of fun in the process.”

“While we hate seeing many shows and festivals cancel this summer,” Osburn said. “We are thrilled to have Joe killing time on 88.5’s airwaves. It will be great for Joe, the station, and listeners!”

“Joe has been a longtime contributor and friend of the radio station, but now that he has his own show, he’s truly part of the Independent 88.5 FM family,” Kaczor said. “I can’t wait to hear his stories. Joe Walsh is rock royalty.”