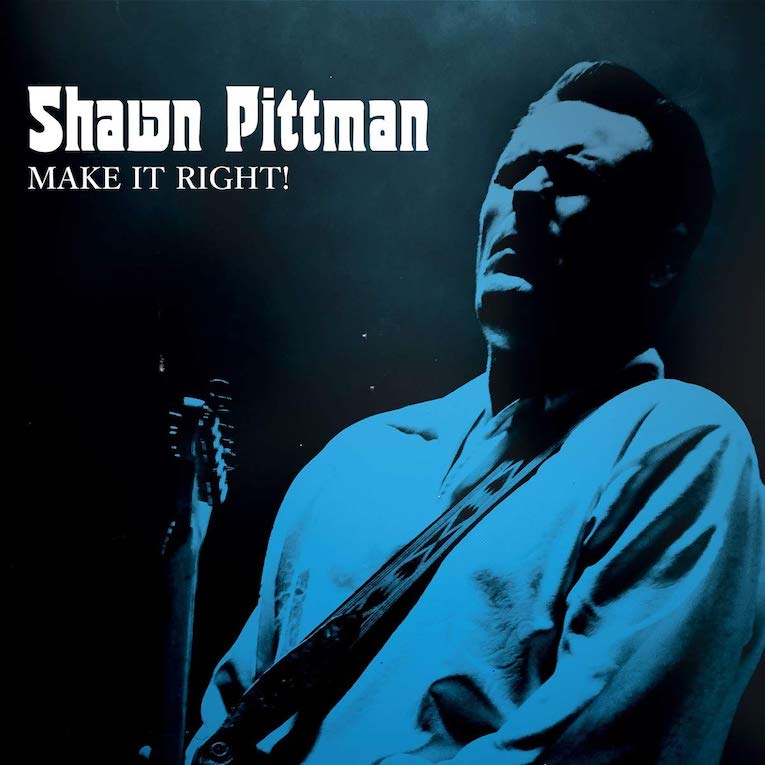 You could waste a good chunk of your life researching the reasons why the number thirteen is considered unlucky. You could spend that time far more profitably basking in the raw and powerful, contemporary blues of Make It Right, the thirteenth studio album by singer and guitarist Shawn Pittman. Oklahoma-born Pittman started out on piano at age eight, but natural forces, in the forms of Lightnin’ Hopkins and Muddy Waters, soon turned his ear to the blues. From the age of seventeen, Pittman spent twenty years in the Lone Star State, honing his skills, developing his sound and releasing several solo albums (his first, the aptly titled Blues From Dallas, hit the airways in 1996). He now resides in Broken Arrow, not far from where he started out. Pittman has toured with Susan Tedeschi, recorded with Double Trouble and performed with members of The Fabulous Thunderbirds.

Album opener “Done Tole You So” is a stirring mix of old and new . Pittman’s fuzzed-up, buzzing guitar circles over the desert-dry drums and bass. “Well I warned you brother, she taking you down slow,” sings Pittman, revisiting classic blues themes of betrayal and ‘bad’ women. “You come knockin’ on my door, you know I done tole you so.” Pittman’s voice is hard-edged, blunt and eminently suitable to the music. There’s a knowing edge to his vocals, but no meanness. The song comes across more as ‘brotherly warning’ than condemnation.

Follower “Finger on the Trigger,” spares a hearty nod to John Lee Hooker’s “Boom Boom.” “I’m gonna shoot you down,” growls Pittman, over percussive, sinuous bass, slow-pumping drums and an effective counterbalance of blues-crunching and clear-ringing guitars. Pittman’s playing is quick and dextrous, a mongoose darting amongst cobras. On “There Will be a Day,” the group pushes the tempo into a rolling, southern-drenched rockabilly affair, providing plenty of space for Pittman to let loose with some supple, inventive lines. He really mixes up his styles here, with an impressive showcasing of trills, riffs, vamps, rolls and tremulous licks. So much so that, as with the best jazz soloists, you can easily find yourself winding back and listening again, just to catch everything that he’s doing.

Production on this album is gritty, honest and straightforward. A little ‘chatter’ is left in, some bleeding is allowed. It leaves you in no doubt that what you are listening to is a bunch of guys in a room playing. You can be certain this immediacy and ‘realness’ is deliberate. The title Make It Right surely speaks of an ethos which colours the whole set. Pittman loves and breathes the blues. Down-home playing is what he does and this passion speaks through every track.

No small amount of the music’s efficacy is down to personnel and circumstances. What we have here is a trio (just like Elvis, Scotty and Bill Black on those famous Sun recordings). Joining Pittman are German/Turkish players Erkan Özdemir on bass and Erkan’s son, Levent, on drums. Together with another son/brother, Kenan, the Özdemirs have been backing top-class musicians across Europe. Erkan, himself, has been playing with Memo Gonzalez and the Bluescasters for two decades. This father-and-son combination on Make It Right lay down some seriously powerful and agile grooves. The twelve tracks presented here were recorded in a short, creative burst over just two days.

“I Feel Good” is a wonderful cut. Jazz-inflected, thumping drums sparkle, roll and drive behind a hypnotic, two-note bass riff. Pittman’s guitar is on fire, singing and wailing with febrile energy. Three musicians and two days equals tight, intense sets, with each player alert, ‘tuned in’ and fully committed to the process. Listen to album closer, “I’m Done.” It’s as coiled as it is loose. You can imagine the floor reverberating beneath you. Pittman and the Özdemir’s will move you, shake you and leave you smiling.

Make It Right, has indeed been made right.  If you’re in the market for joyous, stomping blues-rock, you really should check this record out.

Listen to “There Will Be A Day”