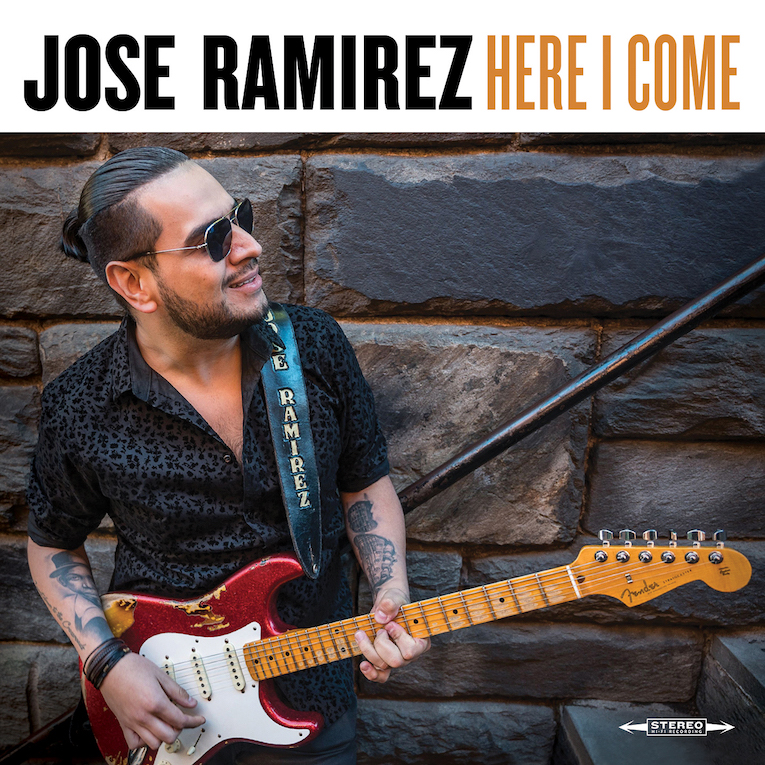 A quick scan of the credits on this debut album by blues singer-songwriter and guitarist Jose Ramirez, Here I Come, out May 29th, merits plenty of excitement. Not many musicians get to work with such a crack team on their first recordings, but there are not many musicians like Ramirez.

At only thirty-two, Costa Rica-born Ramirez has already played with some of the biggest names around, including Mark Hummel, Buddy Guy and Anson Funderbugh. With a tattoo of Robert Johnson on one forearm, the other sporting a ‘cut-away’ reveal of a guitar quite literally under his skin, Ramirez is a player who is remarkably dedicated to his craft. He is also a player who clearly embraces all of the manifold branches of roots music. At the prestigious 2020 International Blues Challenge in Memphis, against some heavy-weight competition, he secured second place; a great springboard for this release. The album was recorded and mixed at Wire Studios, by Stuart Sullivan, who has a long and respected history in blues music. Anson Funderbugh produced the album and lends his considerable guitar talent to two of the numbers.

Title-track “Here I Come” sets off with rollicking honky-tonk piano and jazz-inflected blues and hi-hat accentuated drums. Intermittent crackling guitar flashes throughout this breezy, bluesy work-out. The solo by Ramirez cruises like a Rolls Royce, full of un-hurried assuredness. Plenty of room is left for some simply delightful keyboard work. “So much struggle, so many fights, trying to keep the blues alive,” sings Ramirez, before going on to name-check his inspirations. Ray Charles, B.B. King, and John Lee Hooker all get a shout out. Indeed, on this opening statement, you can hear the muscle of John Lee, the jazzy soul of Charles and the layered introspection of King. “Gasoline and Matches” is soulful and funky. Horns punch and purr, keys swell and roll behind a head-nodding, foot-stomping beat. Across the board, the playing is top-notch.

Of the eleven cuts, nine are self-penned by Ramirez, the remaining two being  Freddie Simon’s “I Miss You Baby,” (previously recorded by Taj Mahal, among others) and, unsurprisingly, Robert Johnson’s seminal “Travelling Riverside Blues” (if you haven’t heard it, check out Led Zeppelin’s electrifying take on this enduring classic). Ramirez’s version is a delight. It smokes and steams in a bright breeze blowing in from the bayou. Ramirez and Sullivan’s arrangement and production are wide open and spacey. Irrepressible rhythm guitar in your left ear, vamping organ in the right. Ramirez’s lead guitar is fuss-free and laid-back, thoughtful and cerebral. His licks are refreshingly free of histrionics and cliché. Closer “Stop Teasing Me” is built upon a classic blues four-to-the-floor beat, infectious and compelling. There is something unique and hard to pin down about Ramirez’s playing. As the ‘other’ King said: float like a butterfly, sting like a bee. Ramirez exhibits a warmer, mellower side than many blues guitarists, but there is an undeniable power there, also.

Making up this aforementioned crack team are music legends Jim Pugh on keys, Wes Starr on drums, Nate Rowe on bass and the Texas Horns trio. Pugh is a certified legend (see his work with Etta James, Eric Burden, Van Morrison, and others). Pugh gets to stretch out quite a bit on keys and his wonderful, rolling style really is a treat. Wes Starr is versatile and swinging, equally at home playing soft and gentle brushes as he is on the faster numbers. Nate Rowe provides some excellent backing throughout. The three Texas Horns, between them, possess a musical pedigree which there isn’t enough space here to recount. With so much talent involved, it is much to Ramirez’s credit that he seems right at home.

In summary, Here I Come makes for a great listen. Not all of the compositions work equally well, but this is a debut. Ramirez possesses the talent and versatility to head in any direction he likes. Here I Come deserves all the praise it has garnered.

Listen to “Here I Come”