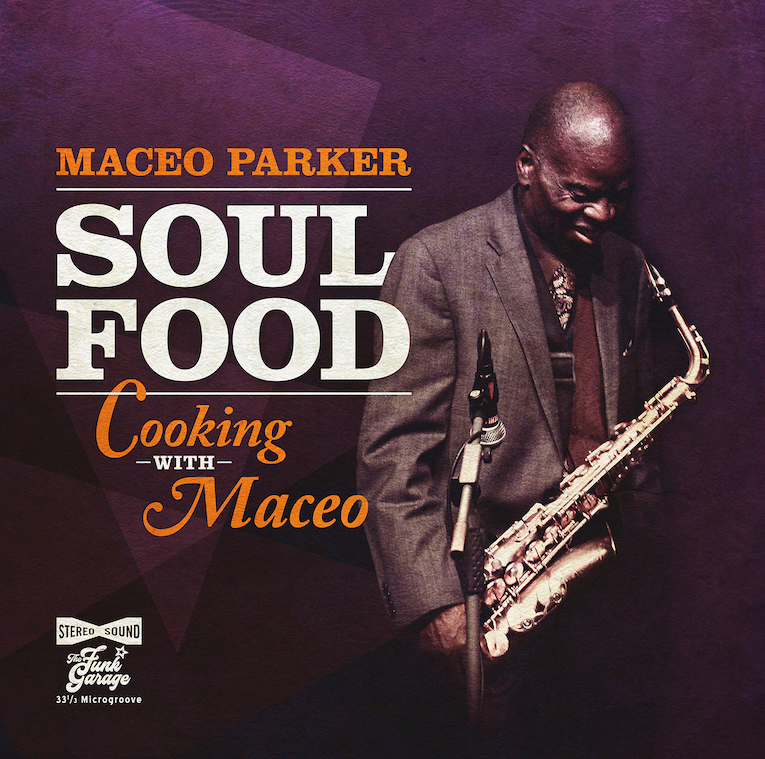 Funk legend, saxophonist, singer Maceo Parker is set to release his 16th album ‘Soul Food—Cooking with Maceo’ on June 26 via Mascot Label Group’s new imprint, The Funk Garage. Parker partnered with New Orleans funk royalty on this record and the result is a master class in saxophone, high-energy groove, musicianship and production. Produced by Eli Wolf, the record is a feast of funk and soul classics as well as originals featuring Parker’s signature punchy saxophone sound and raw, soulful vocals.

Kicking off the album is “Cross The Track,” a funky number with Parker’s James Brown-esque “yeow” sounding the call to get ready. The name of this game is killer groove with Parker’s expressive, staccato sax solos and a smooth horn section. Accompanied by backing singers, Parker turns his sax into a rhythm instrument, bumping the beat.

Musically, Parker and the band are super tight, the production flawless. “Just Kissed My Baby” (The Meters) glides in with funky goodness, syncopated rhythms and Parker’s soulful vocals with grit. You’ll hear a blend of James Brown and Ray Charles folded into his unique voice. An upbeat, funky arrangement, the song features horns, organ fills, and this funk giant’s signature sax stutter. His alto sax playing is closest to the human voice of any horn player I’ve heard. And it’s wrapped up in delicious rhythms and grooves.

Just as the title states, this record is food for your soul. Feeling blue with the pandemic? Soul Food–Cooking with Maceo is your antidote.

With Maceo Parker’s take on “Yes, We Can Can,” it’s a totally different song than Allen Toussaint’s, made famous by The Pointer Sisters. It’s tighter with a compact groove, funkier, smoooooth. And his sax is downright magical. Try to find another horn player like Parker. You can’t. He fashioned a new style of playing decades ago. Many famous sax players make their horns cry, whine and moan—Parker takes this instrument to a whole new level.

Joy. You can hear that in Maceo’s sax playing on the entire album. All tracks are joyous celebrations of funk and soul. Stellar trumpet playing graces “Hard Times” (David “Fathead” Newman) in between Maceo’s staccato and smooth bursts of ear-pleasing sound. I didn’t even notice this tune was an instrumental until it was almost over. That’s how alluring Maceo’s playing is. A master of tone.

There are more outstanding and inventive covers on the album such as “Rock Steady” (Aretha Franklin.) Maceo is knee deep in funk and not unlike James Brown, he uses his voice as a percussion instrument with grunts, and “Good Gawd” and “You know what!” Mr. Groove himself puts his own personal spin on this tune. This is a musician who has clocked hundreds of thousands of hours with some of the best musicians over the decades.

It’s the same with other covers like “Right Place Wrong Time” with Maceo’s unique take on the rhythm and vocal stylings. His voice is raw and soulful on this tune, and if the song wasn’t already funky enough (Dr. John), Maceo makes it tighter. This cover might just blow your mind. And its fun! Enter an inspired guitar solo and backing singers, then Maceo’s rhythmic sax, and you’ve got a reimagined hit.

Prince’s “Other Side of the Pillow” features Maceo with smooth vocals over hints of tasty guitar riffs. His voice on this tune has flavors of Ray Charles. Beautiful sax solos abound—just close your eyes and listen to this. It will take you away to a place you’ll want to return to again and again.

The ever-young master saxophone player, singer-songwriter, Maceo Parker, is one of the all-time greats. And ‘Soul Food–Cooking with Maceo’ is a musical gumbo of master musicians and outstanding tracks. A++.