Women Who Shaped the Blues 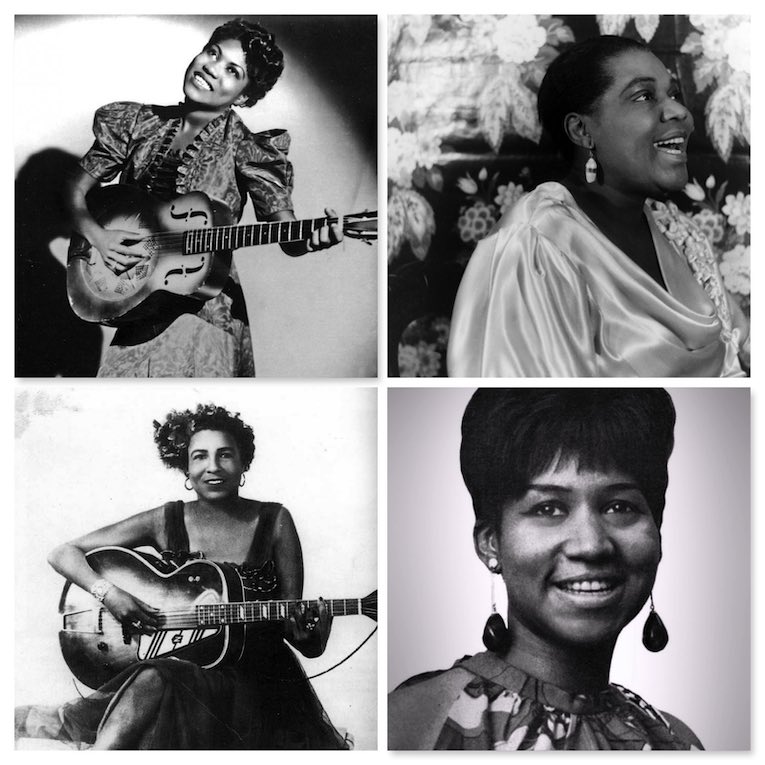 Women Who Shaped The Blues

From the earliest days of blues as entertainment, women were at the forefront. Theirs were the first black voices to be heard on record, and therefore the first to disseminate the twelve-bar art form across the nation (and the world).  Able to occupy spaces forbidden to men (who were routinely perceived as more of a threat), talented artists such as Bessie Smith and Ma Rainey paved the way for future generations, planting the roots which would eventually lead to R&B, blues-rock and rock and roll itself. Their playing, their songs and their compositions, made the blues grow and bloom. The music of the women in this list will stir your soul, rock your bones, lull you to sweet peacefulness and raise your blood pressure to the roof.

Bessie Smith
With a rich, expressive voice, more than capable of moving and shaking, ‘The Empress of the Blues’ began her recording career in 1923. Smith is credited with being one of the very first performers of either sex to include blues in her stage act. Her track, “Downhearted Blues,” sold an estimated 800,000 copies, an astonishing number, which propelled Smith to international stardom. Listening back in 2020 you can hear, despite the relatively poor audio, the timeless, soaring efficacy of Smith’s voice. In person, she must have been truly compelling.

Sadly, Bessie Smith died at the age of just forty-three, after being critically injured in an auto-mobile crash. Bessie’s lover, Richard Morgan (uncle of jazz great Lionel Hampton) was behind the wheel at the time. It is mark of that era that two ambulances were dispatched, one from a ‘White’s-only’ hospital, the other from a ‘Black’s-only’.

Ma Rainey
Ma Rainey also featured prominently in the first wave of blues recording artists, though in fact she had been performing since the early years of the twentieth century. With her raw, deeply affecting sound, the “Mother of the Blues’ set down the template for blues vocalists, influencing so many to come.

Her surviving recordings are ample testimony to her talents. Listen to “See-See Rider,” (later notably covered by Elvis Presley) and you can hear the moaning, wailing, outpouring of naked emotion which is such a trademark of the genre. Rainey worked and recorded with, among others, the great Louis Armstrong. Like Bessie Smith, Rainey was somewhat notorious for her wild personal life. She died of a heart-attack in 1939, aged fifty-three.

Memphis Minnie
Memphis Minnie (born Lizzie Douglas, she was given her stage name by a Columbia Records A&R man) was a blues guitarist, singer and songwriter who began her professional career in the late 1920s. Her recordings are much-prized as rare examples (for the time) of a female blues guitarist. Minnie wasn’t the first blues-woman to play guitar, but, for whatever reason, she is a notable exception in that most female singers did not record with that instrument. Either way, Minnie is deservedly sure of a place in the great blues pantheon.

Listen to her version of “When the Levee Breaks” (much later, a big hit for Led Zeppelin). The track is a constant delight. Minnie’s playing is sparkling, spirited and spellbinding. Both melodic and percussive, her excellent guitar-work is equally matched by her strong, deep vocals.

Sister Rosetta Tharpe
Heavily influenced by gospel, but undoubtedly in love with the blues, singer and guitarist Sister Rosetta Tharpe released her first sides on Decca Records in the late 1930s. As a guitarist, she most certainly must have been a major influence on the coming generation of rockers. Her rolling, swaying, exuberant style remains irresistible. Listen to “This Little Light of Mine.” Here, Tharpe displays the passion of gospel, coloured with deep blues.

In fact, it was her foray into pure blues, in the early 1950s, which led to a sharp downturn in Tharpe’s popularity. Long-time fans and gospel purists were appalled, yet Tharpe continued with the music she loved, both gospel and blues, effectively blending the two. For an extra treat, be sure to dig out footage of Tharpe performing live in Manchester, England in 1964, in the rain, at a train station, in front of an adoring and appreciative crowd. It never fails to warm my heart. I’m sure it will yours.

Billie Holiday
Billie Holiday’s influence is incalculable. She was the first to bring the highly personal, ‘lived experience’ ethos of pure blues to the realms of popular song. She cut her first record in 1933, but it was her tracks recorded in the 1940s which allowed her to truly shine. Holiday’s artistic integrity is without doubt and she left an indelible mark on a string of unforgettable and highly affecting songs.

“Strange Fruit,” still sends a chill down the spine. From its intro of Mexican horns over heavy minor chords, Holiday’s interpretation remains a powerful, bold statement. “God Bless The Child,” although lighter in tone, further showcases Holiday’s innate ability to reach out and connect. The naked fragility which makes her voice so compelling sadly extended to her personal life. Holiday died from complications arising from years of alcohol and drug abuse, in 1959.

Etta James
Born in 1938, Etta James’ career spanned six decades, over which time she effortlessly cemented herself as the premier exponent of blues song. One-time Atlantic Records Vice-President, producer and critic, Jerry Wexler (a mighty force in popular music in the 50s and 60s), called James “the greatest of all modern blues singers.”  It would be churlish to disagree. James’ celebrated debut album , 1961s At Last! regularly makes the best-of lists in virtually any publication you can find, and with good cause. At Last! remains one of the very few, truly timeless records. It is blues for the angels, sung by an earth-bound glowing soul, staring up into the clouds and beyond.

James’ final album The Dreamer, was released just a few weeks before her death in 2012. From start to finish, Etta James recorded an astounding body of work.

Aretha Franklin
Aretha Franklin’s gospel-blues-soul started a fire in the late fifties which burned blindingly bright on through the sixties and seventies and beyond. She released her first album at just fourteen years of age (1956s aptly titled The Gospel Soul of Aretha Franklin). Even those early recordings are a force to be reckoned with. Listen to “There Is A Fountain Filled With Blood” from that set and you will hear the extraordinary power and poise Franklin possessed, even then.

Fast-forward to 1968s Lady Soul album and you will hear that same unstoppable force belting out sensational, blues-drenched soul, the craft and polish of which will drop your jaw to the floor. Franklin’s voice, arguably, is still unmatched for its fire and its strength.

Ella Fitzgerald
Similar to Billie Holiday’s beguiling recordings with saxophonist Lester Young, Ella Fitzgerald will forever be remembered for her magical duets with Louis Armstrong, though her achievements amount to so much more. Born in 1917, Fitzgerald’s vocal tone and purity of delivery, together with her impeccable sense of swing and incredible ‘scat’ singing, earned her thirteen Grammy awards over an astonishing fifty-year career.

Listen to her 1963 album These Are The Blues and you can’t fail to be charmed by Fitzgerald’s perfect, soulful singing. She gives a performance so deep that you could fall into it, lost forever in a beautiful otherworld of gently-swinging, always enticing song.

Big Mama Thornton
With her menacing, growling, thumping delivery, blues-belter Willie Mae ‘Big Mama’ Thornton, born 1926, helped put the rock into rock ‘n roll. Her version of “Hound Dog,” which predates Elvis Presley’s by four years, is a landmark recording by anybody’s standards. If you’ve not heard this remarkable single, I urge you give it three minutes of your time. This is blues-rock at its finest, swaggering, sweating, and bouncing. Like so many on this list, Thornton started off in gospel, before the blues took their hold.

Though Willie Mae didn’t enjoy the success which her talent undoubtedly warranted, the recordings which she left behind are testament to her enduring talent.

Ruth Brown
Blues and R&B singer Ruth Brown enjoyed so much success during the 1950s that she earned Atlantic Records the epithet “the house that Ruth built.” Brown’s seductive, yet rough and tough vocals powered such wonderful singles as the jazz-blues number “I Know” and R&B/blues classic “5-10-15 Hours” to critical and popular acclaim.