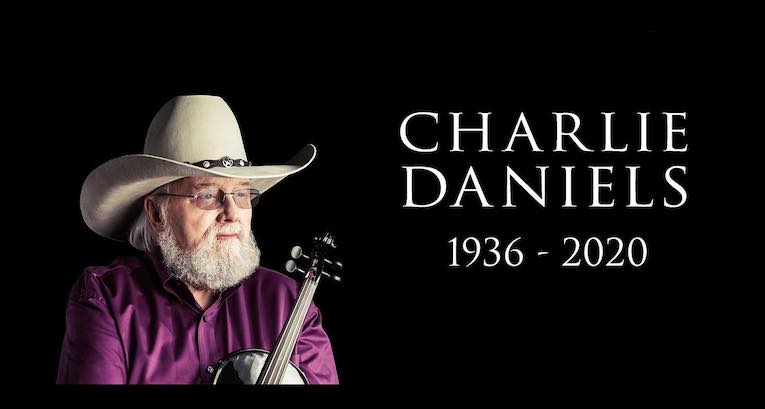 Country music and Southern rock legend Charlie Daniels has passed. The Country Music Hall of Fame and Grand Ole Opry member died this morning at Summit Medical Center in Hermitage, Tennessee. Doctors determined the cause of death was a hemorrhagic stroke. He was 83.

Funeral arrangements will be announced in the coming days.

Singer/songwriter/multi-instrumentalist Charlie Daniels, whose mix of Country and Southern rock made him a popular artist during the 70’s and 80’s, had suffered a mild stroke in January 2010 and had a heart pacemaker implanted in 2013 but continued to perform.

Daniels, a singer, guitarist and fiddler, started out as a session musician, even playing on Bob Dylan’s “Nashville Skyline” sessions. Beginning in the early 1970s, his five-piece band toured endlessly, sometimes doing 250 shows a year.

Daniels performed at White House, at the Super Bowl, throughout Europe and often for troops in the Middle East. Daniels attracted attention as a singer and bandleader with several singles “Uneasy Rider, “The South’s Gonna Do it Again”, “Long Haired Country Boy,” and more.
He played himself in the 1980 John Travolta movie “Urban Cowboy” and was closely identified with the rise of country music generated by that film.
“I’ve kept people employed for over 20 years and never missed a payroll,” Daniels said in 1998. That same year, he received the Pioneer Award from the Academy of Country Music.

“The Devil Went Down to Georgia” was No. 1 on the country charts in 1979 and No. 3 on the pop charts. It was voted single of the year by the Country Music Association.

According to the Charlie Daniels website, from his Dove Award-winning gospel albums to his genre-defining southern rock anthems and his CMA Award-winning country hits, few artists have left a more indelible mark on America’s musical landscape than Charlie Daniels. An outspoken patriot, beloved mentor, and a true road warrior, Daniels parlayed his passion for music into a multi-platinum career and a platform to support the military, underprivileged children, and others in need. The Charlie Daniels Band has long populated radio with memorable hits and his signature song, “The Devil Went Down to Georgia.”

Over the course of his career, Daniels received numerous accolades, including his induction into the Country Music Hall of Fame, the Musicians Hall of Fame and becoming a member of the Grand Ole Opry. Daniels helped to shine the spotlight on the many causes that are close to his heart. He was a staunch supporter of the military and gave his time and talent to numerous charitable organizations, including The Journey Home Project, that he founded in 2014 with his manager, David Corlew, to help veterans of the United States Armed Forces.

He hosted regular Volunteer Jam concerts in Nashville in which the performers usually were not announced in advance. Entertainers at these shows included Don Henley, Amy Grant, James Brown, Pat Boone, Bill Monroe, Willie Nelson, Vince Gill, the Lynyrd Skynyrd Band, Alabama, Billy Joel, Little Richard, B.B. King, Stevie Ray Vaughan, Eugene Fodor and Woody Herman. Daniels, a native of Wilmington, N.C., played on several Bob Dylan albums as a Nashville recording session guitarist in the late 1960s, including “New Morning” and “Self-Portrait.”
At the age of 71, he was invited to join the epitome of Nashville’s music establishment, the Grand Ole Opry. He was inducted in the Country Music Hall of Fame in 2016.