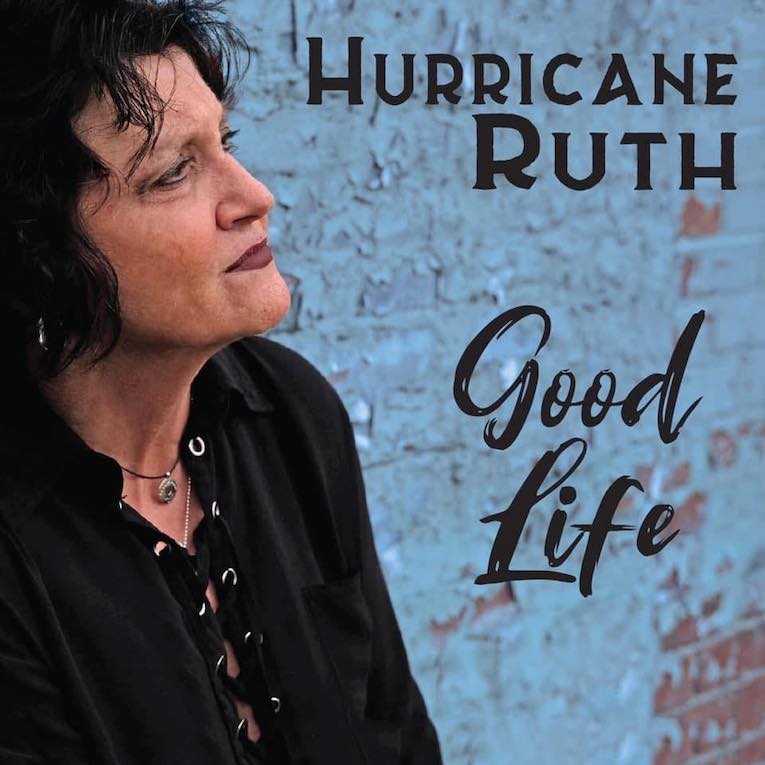 Powerhouse blues vocalist Hurricane Ruth gives it everything she’s got on her new album Good Life, a smoking-hot set that hits the streets July 10th, 2020 on American Showplace Records. This is Ruth’s fifth studio record and her first on the American Showplace imprint. Produced by Ben Elliott and tracked at Showplace Studios in Dover, New Jersey, Good Life features eight new songs written or co-written by Ruth plus Grammy-winner Gary Nicholson’s “Torn In Two” and “I’ve Got Your Back” written by Karen Leipziger, Freda McCrary, and Irene Kelley. These ten tracks add up to another huge blast of the deeply soulful two-fisted blues Hurricane Ruth does so well, one that’s sure to get a party started anywhere it gets played.

Hurricane Ruth LaMaster first came to music in her hometown of Beardstown, Illinois where her father owned The Glendale Tavern, a tipling establishment that hosted jam sessions on Sundays. He also played the drums for these jams and Ruth was sitting in his lap keeping time on the ride cymbal by the time she was three years old. She was first exposed to blues, country, rock, jazz, and big band sounds during her Sundays at The Glendale, all of which still inform the music she writes today. Ruth started her career as a dancer but began singing while in high school. She sang songs that she heard in her home by Bessie Smith, Ray Charles, Dinah Washington and Ella Fitzgerald, turning those influences into her own hard-rocking brand of blues music. Since then, Ruth has performed with legendary artists including B.B. King, John Lee Hooker, Sam & Dave, Willie Dixon and Taj Mahal and has taken her signature sound all around the USA.

From the first moments of the opening song, “Like Wildfire,” Ruth’s appeal is immediate and undeniable. The track is a revved-up blues/rock/boogie extravaganza that drops a brick on the gas pedal and leaves it there. Backed up by an ultra-powerful band made up of Scott Holt (guitar), Bruce Katz (Hammond B-3, keyboards), Calvin Johnson (bass), and Tony Braunagel (drums), Ruth comes on strong and delivers a performance that would blow the roof off of any roadhouse in the world. “Like Wildfire” captures everything that’s great about real American rock and roll all at once and will have you quickly reaching to turn it up loud.

“Dirty Blues” follows and hits a sweet and solid mid-tempo pocket that’s reminiscent of some of The Rolling Stones’ finest moments. Ruth and guitarist Scott Holt are both big-time heat generators and their interplay here is beautiful to behold. Holt’s stinging guitar licks soar above the gritty groove and he consistently plays the right ideas at the right times. The title track, “Good Life,” is an emotive and profound ballad inspired by a soul-searching conversation she had with her mother before she passed away. Ruth sings the words of someone looking back on her own life from its last chapter and takes an unflinching look at the ups, downs, and difficulties of her days and what it took to survive them. The song is the spiritual centerpiece of the record and will leave its mark on all who hear it.

Good Life is an outstanding effort from one end to the other by an artist who should be a household name. From the funky soul of “She’s Golden” to the closing ballad “I’ve Got Your Back,” there’s not a second here that should be overlooked. Hurricane Ruth more than lives up to her name and puts her blues down like it’s a matter of life or death. She’s pure, unadulterated, and believable in that way all great artists are and will instantly win a permanent spot in your record collection.

Listen to Far from The Cradle by Hurricane Ruth