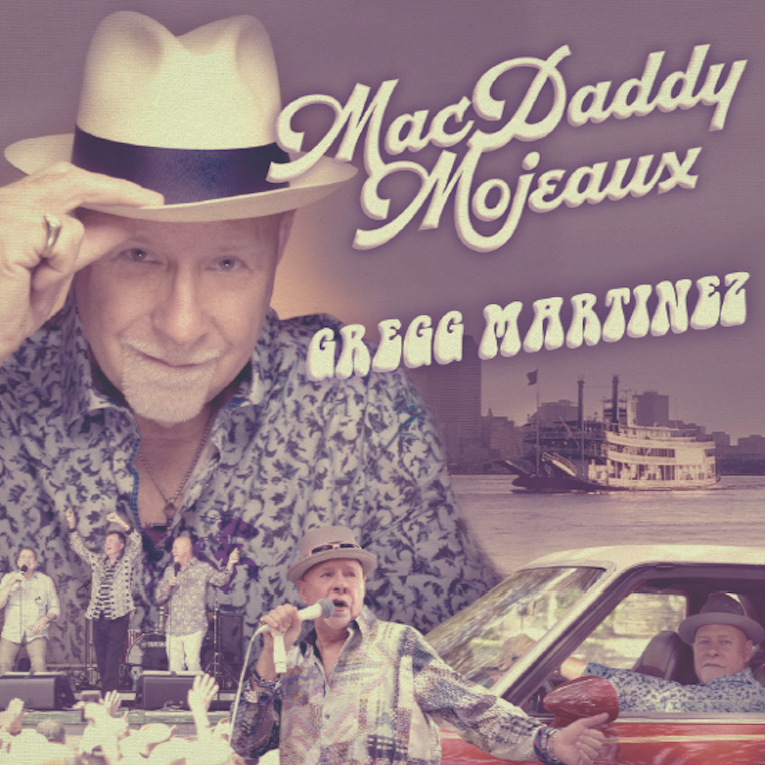 It’s not every day that you get to review a record by a living legend. Louisiana-born singer Gregg Martinez is just that. He’s been an exemplar of the Southern blues sound for five decades and earned his moniker “Mac Daddy” early in his career as the leader of the King Fish, The Heat, and The Boogie Kings. His soulful, powerful vocals are inspired by the Soul crooners of the 60’s and 70’s, including Sam Cooke, Marvin Gaye, and Al Green. His music combines New Orleans style R&B with Philly and Memphis Soul and Texas Swing. A 2019 inductee into the Louisiana Music Hall of Fame, Martinez has had both boots firmly planted in the blues. MacDaddy Mojeaux, is his first album since Soul of the Bayou, and is set to release July 17, 2020 via Nola Blue Records and features an impressive list of guest appearances.

MacDaddy Mojeaux opens with, Ray Charles’ “I Believe To My Soul,” here transformed into a rolling, horn-drenched and heady brew of smouldering guitar vamps, jazzy, swinging drums and steaming Hammond-organ. The vibe of this cut is hard to pin down. There’s that classic late-60s easy-rolling power of Stax Records, yet this is wedded to crystal-clear production and the delightful open-space feel of Robert Cray’s 80’s output. Everything is clean and crisp but not too clean. This is a song with mud on its boots and Martinez’s vocals steal the show.

What sets Martinez’s voice apart from other blues singers is his tone and range. Martinez’s delivery is smooth and soulful–he can soar high and like Ray Charles’ himself, transmits a special kind of ‘blue’ intensity. It is a voice comprised of heavy but light, strained yet easy. Small wonder that Offbeat Magazine has repeatedly nominated him for Best Male Vocalist.

It’s a mark of Martinez’s confidence (and his taste) that he tackles the classic “You Left the Water Running” (which was a hit for both Otis Redding and Wilson Pickett) head on. Martinez’s take is a sparkling, almost George Harrison-esque mix of old and new. We have the old, soul-blues of the vocals, plus a vintage mix of horns and Hammond organ, but the arrangement feels fresh, a light touch which bounces and skips, with a sunny sax break.

Original number “This House,” makes you wish that Martinez would record more of his own songs. Some lovely wah-wah guitar kicks things off and the track pulses and flashes, a cool breeze on the bayou. The tasteful use of backing vocals and the driving, joyful chorus makes this dance groove a standout.

Joining Martinez for this set are a sparkling compliment of musicians, including a full horn section. Too many to mention, in fact, but it’s worth singling out contributions from long-time collaborator, Grammy-winning songwriter and guitarist Tony Goulas, respected veteran blues guitarist Sonny Landreth, Anthony Dopsie and Rockin’ Dopsie Jr, (the latter sons of Zydeco great, Rockin Dopsie Sr), on accordion and rubboard respectively. Engineering is by Grammy-Award-winning Tony Daigle, whose aforementioned production lends a bright, vibrant tone to the album.

Another original, “Eva Delle,” provides a worthy platform for the Dopsie brothers to do their thing. It’s a slow, muddy-river blues, enlivened by swooping horns and vamping piano. The accordion and rubboard lift the whole thing up and whirl it out of the speakers and into your heart. You can’t sit still listening to this number, and why would you want to? On “Starting All Over Again,” (a fascinating Stax single from 1972) Martinez retains the gospel, stripped-down feel of the original but adds a deeper level of sweet soul for a weightier, more uplifting effect. The Randy Newman-penned “Marie” closes the album. With just vocal, piano and strings, it’s the perfect showcase for Martinez. Not many singers could perform this song with such poise and efficacy.

From top to toe, this is an album which exudes class and focus, but there’s plenty of room left for fun. You can’t help but think that a live show would lift these tracks to a whole other level, which is not to denigrate these recordings in any way. With MacDaddy Mojeaux, Martinez and company provide proof positive that there’s plenty of life left in Southern blues.