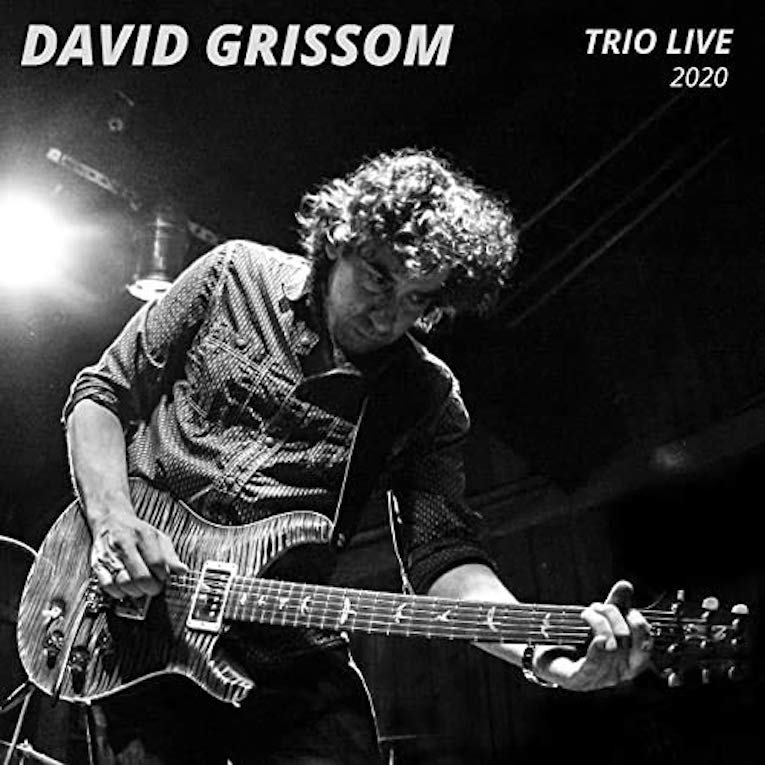 Austin, Texas guitarist, vocalist, and all-around musical monster David Grissom takes us all to school on his new solo album Trio Live 2020. Released May 1st, 2020 on the Wide Lode label, the record is a live set of mostly instrumental tracks by Grissom’s three-piece band captured at his regular Tuesday night residency at Austin’s legendary and eternal Saxon Pub. It’s a true electric guitar showcase by one of finest and most individual players the US has ever produced and clearly demonstrates why Grissom has been chosen to record and perform with the likes of Buddy Guy, John Mellencamp, Joe Ely, Storyville, The Allman Brothers Band, The Dixie Chicks, Chris Isaak, Robben Ford, John Mayall, and Ringo Starr. Grissom has more range and musicality than most musicians will ever achieve and Trio Live 2020 puts his immense talent and tone on full display.

Grissom arrived in Austin in 1983 and quickly became known in the city’s deservedly-famous music scene. He joined Texas songwriting star Joe Ely’s band in 1985, touring and recording extensively with him until he left to become part of John Mellencamp’s band in 1991. Grissom played on three albums with Mellencamp and toured with him until 1993. He then formed Storyville with Stevie Ray Vaughan and Double Trouble’s Chris Layton and Tommy Shannon and powerhouse vocalist Malford Milligan. In the 21st Century, Grissom has played on four Buddy Guy albums, toured with The Dixie Chicks, designed signature guitars and amps for Paul Reed Smith, played a ton of solo gigs, and produced his solo records, of which Trio Live 2020 is the fifth.

As a guitarist, Grissom has an exponentially larger vocabulary and a more personal style than almost any other player working today. He makes excellent use of both from the first moments of the opening track “Lucy G.” The song is a mid-tempo funk/rock number that gives Grissom plenty of space to dig into his apparently endless bag of ideas and phrases. He avoids the cliched pentatonic riffing that defines so many guitar players and instead indulges in lines, chords, and intervals that exist outside of typical roots rock. Grissom never plays what you’d expect him to and therein lies his brilliance.

Grissom and his band then move on to a complete reinvention of the blues standard “Crosscut Saw.” Grissom takes huge liberties with the very idea of the blues here, removing the overwhelming Dominant 7th tonality of the genre and replacing it with melodies, modes, and chord suspensions that border on blues fusion. He comes across as more closely related to players like Robben Ford and Eric Johnson than SRV and Hendrix and fearlessly takes this familiar track into new territory. Even when he returns to a more inside style on Albert Collins’ “Don’t Lose Your Cool,” Grissom still avoids sounding like anyone but himself and proves how much wiggle room exists in such an often-covered tune.

“Never Came Easy To Me” sends DG back to the vocal mic for a slow, expressive, and mournful batch of blues. His voice is understated and laidback and works well as an additional texture on top of his highly dynamic guitar work. That he and the band can evoke so much pain and energy at a practically whispered volume as they do here is the most impressive part of the track.

There are only eight songs on Trio Live 2020 but every second of the record is packed with the kind of playing and musical cognition that every musician aspires to. Grissom deserves to be a lot more famous than he is and all fans seeking a more evolved flavor of American roots music will quickly become enamored with this captivating live set. Highly recommended.