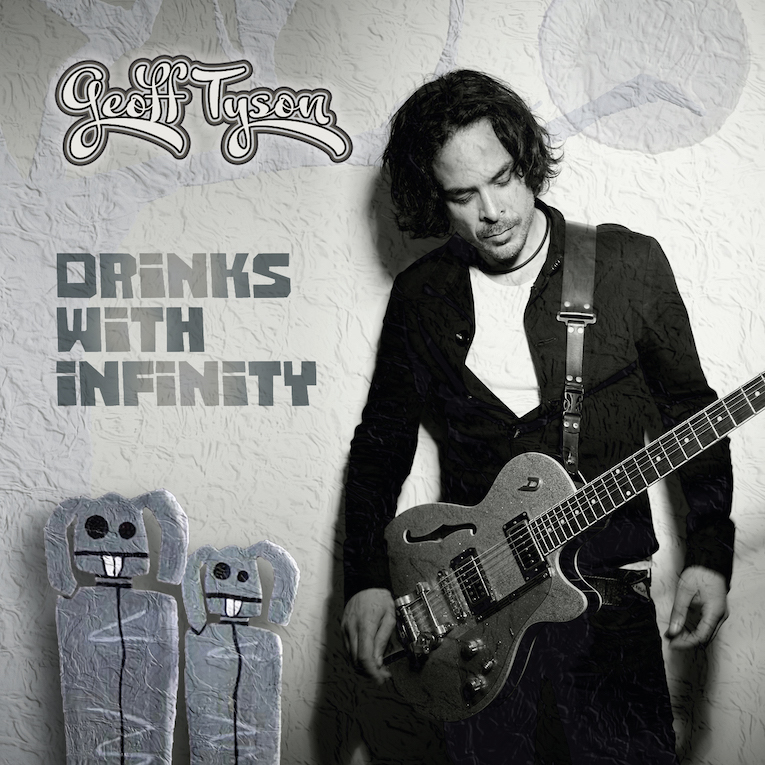 Hot-handed California guitarist Geoff Tyson drops his first ever instrumental album, Drinks With Infinity, July 31st, 2020 on Cargo Records. Tyson is a skilled rock player from the ground up, starting out as a 13-year-old student of pre-fame Joe Satriani and cutting his teeth jamming with high school cohorts Alex Skolnick, Charlie Hunter, Jude Gold, Joshua Redmond, and Third Eye Blind’s Kevin Cadogan. As he grew, he became a producer, recording engineer, and singer-songwriter but never lost his enthusiasm for rocking the fretboard. Drinks With Infinity is Tyson’s way of coming full circle back to his roots as a guitarist after many years of working in vocal-oriented situations and serves as a summation of his skills and experience.

Tyson may be a new face to some but his credits stretch back to the mid-1990s. In 1994, he recorded and toured with T-Ride and released an album on Hollywood Records. Following that, Tyson appeared on Snake River Conspiracy’s debut album on Reprise Records and toured with Monster Magnet and Queens of the Stone Age. In 2003, he formed Stimulator with singer Susan Hyatt and, in 2005, they signed a record deal with Universal Music. Stimulator toured the world with Duran Duran and The Go-Go’s and was also featured on the Vans Warped Tour. He attributes much of his success to his time studying Satriani and is one of only two students Satch considers to have graduated from his lesson program. The other student? Steve Vai. “Satriani and I met weekly for about 2 ½ years,” Tyson says, “and he became my mentor and inspiration, always challenging me to do something unique and personal. It’s a lesson I have applied to all aspects of my musical endeavors.”

Tyson opens Drinks With Infinity with the technically-enhanced rock shuffle “Six Weeks Of Tina.” His Satriani influence is immediately apparent but not in the way you’d expect. Tyson doesn’t play like Joe so much as he seems to have absorbed some of his thought process. He puts interesting, well-conceived sections together, writes strong melodies, and comes across as a rock composer rather than just another shred dude. Make no mistake: Tyson can boogie with the best of them but there’s clearly much more to him than just ripping guitar. This man has ideas.

“Shag” gets heavier but still grooves hard features Tyson dealing out soaring melodies as well as constructing compelling rhythm parts and textures. Drum hero Eduard Štěpánek lays down the law here and throughout these sessions and locks with Tyson like a second skin. “Strawberry Napalm” starts out trippy and atmospheric but veers in and out of a tight mid-tempo pocket. Tyson again delivers big-time melodies and production ideas that border on the cinematic. He shows his chops, of course, but in ways that make sense and that don’t feel forced or disrupt the emotional flow of the cut.

“Asabara” continues Tyson’s journey through the atmosphere but this time out he takes a more exotic path that smacks of the desert. He takes us out onto the dunes and up into the clouds all at once while simultaneously turning in some absolutely scorching guitar work. Be sure to also get up close and personal with “Bark,” the blissfully glitched-out “Freckle,” and “Liquid Kitty.” Geoff Tyson has a strong individual voice as a guitarist and a composer and Drinks With Infinity is one of the most original, impressive, and listenable guitar records to emerge in a long time. Fans of skilled and smart rock guitar need to hear it from start to finish.

Listen to “Six Weeks of Tina”