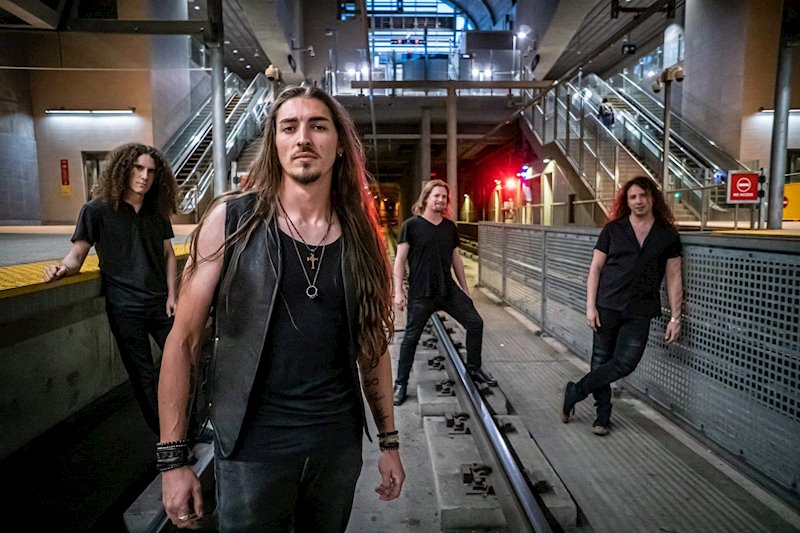 In/Vertigo is one hot rock band. They have released their new video “Take It” from their debut EP, Sex Love & Chaos, out now. With Reed Alton on lead vocals, Shaddy Elsaghir on guitar, and Duncan McCartney on bass, In/Vertigo is the quintessential rock n’ roll band. Catchy riffs, rhythm locked down, and a killer lead vocalist–this is a band to watch.

Says the band about Sex, Love & Chaos, “Sexy, Passionate and Chaotic. All the songs represent these three things in one or more ways. We want to get their hearts pumping, and veins throbbing. We want to be the soundtrack to your sex life, social life, your highs, your lows, and your deepest introspective moments.”

Canadian hard-rockers In/Vertigo signed a worldwide record deal with Rockshots Records for their debut EP. Formed in 2016 by local Calgary rock veterans, In/Vertigo started right away to create a turbulent force that wrecked havoc throughout Western Canada in the recent past years. The band was able to constantly tour and gig for over two years reaching upwards of 350 shows, even opening for bigger bands such as Diamond Head, Pop Evil, The Wild!, The Lazy’s.

With their revamped and polished debut EP, In/Vertigo set out to launch the next great chapter in rock history, making way for most up and coming quintessential Rock ‘n’ Roll act of this generation. They are hungry, and armed with a sonic Molotov cocktail of sound, aimed at the music world who unapologetically thirsts for classic/hard rock.

In/Vertigo was founded in the spring of 2016 by local Calgary rock veterans Shaddy Elsaghir and Duncan McCartney who had got in contact with local vocalist Reed Alton. After jamming with a few drummers they found their fourth quarter in Keaton ‘Keystone’ Byfield through a reliable recommendation. The quartet immediately found chemistry through both musical and personal commonly related beliefs and goals. Thus creating a tubules force that would wreak havoc throughout Western Canada for the next few years.
Through hard work, relentless ethic, and determination, I/V was able to cement themselves as rock and roll staples within their hometown of Calgary and the rest of the western Canadian provinces. They soon started to open up for bigger named acts such as Diamond Head, Pop Evil, The Wild!, The Lazy’s to name a few, and gaining even more attention and accolades.

In/Vertigo comments on “Bad Enemy”: “The first single from Sex, Love & Chaos: we feel this song showcases an all-around view of the band performance wise and musically. This song stemmed from a negative encounter turned humorous and full of karma on one of our tours. This spawned the idea, ‘I’m not a good friend, I’m a bad enemy’!”