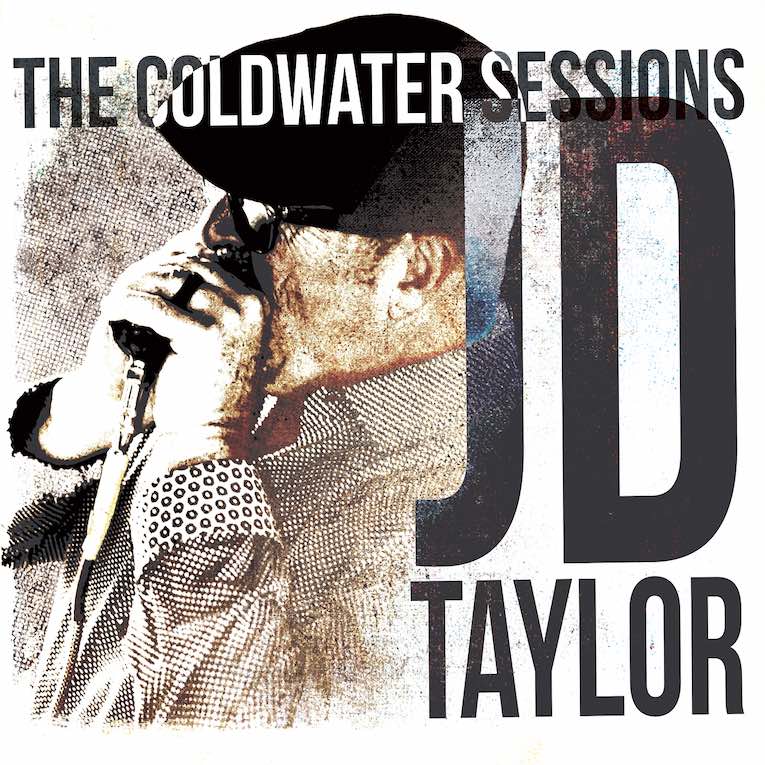 The Coldwater Sessions by JD Taylor, released August 7th on VizzTone Label Group, is one of the more intriguing prospects you will encounter, with a wonderful line-up and a great back-story. A native of Brownsville, Tennessee, JD Taylor didn’t even pick up a harmonica until his thirtieth year, when he received one as a gift. He spent the next three years learning and practicing in the legendary Beale Street area, before forming Little Boys Blue, who released their first album in 1995. That band have been playing and releasing albums ever since, but this is Taylor’s debut solo effort. It features 11 all-original compositions with contributions from members of the Grammy-nominated Southern Avenue, plus Hammond organ by none other than Rev. Charles Hodges (Al Green, Albert Collins, Bonnie Raitt, Boz Scaggs.)

The Coldwater Sessions is an album formed from many influences. The old-school blues are here, front and center, but so is the barely repressed energy of Otis Redding and the jumping, edginess of James Brown. A good example is “Ooh Wee,” which runs and rolls, with some beautiful soul horns and early rock ‘n roll rhythms, twisting round Hammond organ, bouncing drums and snaking harp. It’s a track that successfully combines the driving showmanship of early Motown with the power and pathos of John Lee Hooker.

The album is a showcase for JD Taylor’s passion for creating and writing blues and roots music with his soulful vocals and tasty harp playing.

The amplified harmonica is capable of producing some wondrous, expressive sounds. Taylor’s blues harp playing sports a delightful rockabilly edge, with an arresting blunt-sharpness, pouring out fiery soul with that peculiar blues-joy which comes from looking up when you can’t get any further down.

Hodges keyboard work is simply wonderful, almost mesmerizing, and you will find yourself listening closely as he vamps and rolls, blending effortlessly with the rest of the band. The Hammond B3 is one of the most celebrated and distinctive sounds in music. From the days of the trail-blazing Jimmy Smith, whose mid-50s Blue Note recordings are well worth seeking out, the Hammond has provided a backbone for some of the greatest hits in soul, blues and R&B.

Lyrically, The Coldwater Sessions chart familiar blues territory with tales of hustling for survival, fractured relationships and street-smarts gained the hard way. What lifts this album above the ordinary, apart from the exemplary musicianship, is the fascinating stylistic blending on tracks such as “Hanging On,” which begins with some rollicking, pre-war sounding harp by JD Taylor, before running full pelt at a bouncy jazz-blues reminiscent of early Ray Charles. Like Charles, it’s evident that JD Taylor is a musical magpie in the best sense, able to pull together elements from different eras and genres and blend them into a coherent whole.

“Honey Honey Baby,” for example, is slow-rolling southern country, with straw on its feet and dust in its eyes, which also features some highly effective and sophisticated backing harmonies, straight-out blues chords and jagged guitar runs which wouldn’t sound out of place on an early Elvis single. If it weren’t for the modern, clean production, you might be hard placed to pin down The Coldwater Sessions to any particular era or locale. But then why would you want to? Elvis himself was no stranger to mixing and matching. The same breadth of expression yet consistent style which graced Elvis’s debut album runs through The Coldwater Sessions. Everything here ties together nicely into a rewarding and highly enjoyable record.

Listen to “If It Ain’t Good”