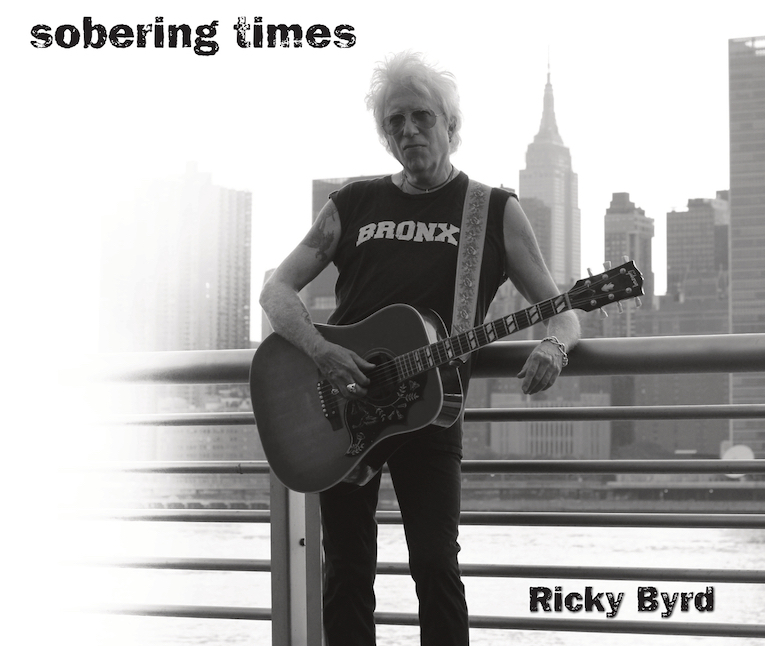 Sobering Times is an honest and intimate reflection of recovery delivered through his signature brand of Rock ‘N’ Roll. As Goldmine Magazine states “…The Faces and The Rolling Stones with a dash of Otis…It rocks like a b*tch. His vocals are the best of his career…early indications make it seem likely that this will be his career statement.”

Following the path he carved with his 2017 album Clean Getaway, Sobering Times (produced by Ricky Byrd and Bob Stander) continues his mission to deliver the message of hope to those recovering from addiction. He expresses the roller coaster of emotions and every day trials of recovery, from hitting rock bottom, to the gratitude of surviving and thriving in a sober life.

Additionally, he collaborated with Richie Supa (“I Come Back Stronger”) and Willie Nile, who duets with Byrd on “Recover Me”, in addition to Emily Duff, who co-wrote “Ain’t Gonna Live Like That.” Fittingly, he also recorded a cover of Merle Haggard’s “The Bottle Let Me Down”.

Byrd chose the Sobering Times release date of September 25 as it’s also the 33rd anniversary of the day he started his sober journey. Having lived through the disease of addiction himself, Byrd has made it his mission to help others as a recovery coach and drug/alcohol counselor, who visits schools, rehab facilities, detention and detox centers to perform, talk, and lead recovery music groups. In fact, he gave away almost 2500 copies of Clean Getaway at these facilities, so clients could take the message of recovery home with them.

He dedicates Sobering Times to all of those who struggle with addiction, as well as the recovery warriors who help those who are struggling, those that support a clean and sober lifestyle, and of course, those that still love loud and proud Rock ‘N’ Roll.

“As far as third acts go, I couldn’t be more grateful for mine,” says Byrd. “I get to use the undeniable power of R’n’R to spread the recovery message to those that are struggling….pretty… pretty… pretty good.”

Although best known for his time with Joan Jett and The Blackhearts, Byrd has also recorded and played with Roger Daltrey, and toured with Ian Hunter and Southside Johnny and the Asbury Jukes, respectively. He is also proud to have shared stages with such music royalty as Paul McCartney, Ringo Starr, Alice Cooper, Bruce Springsteen, Steven Van Zandt, Smokey Robinson, and Mavis Staples, among others.