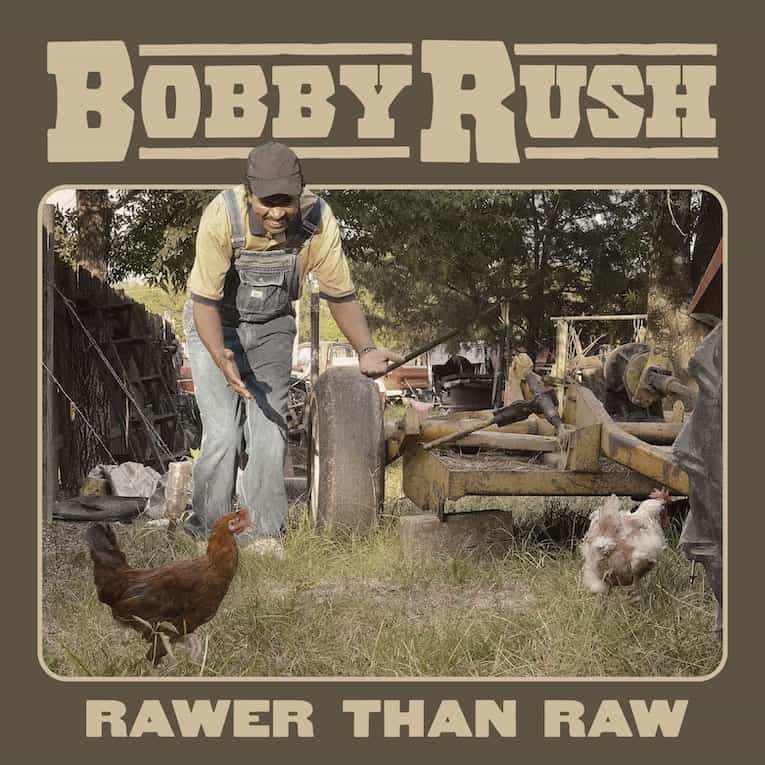 Grammy-winning blues icon, Blues Hall of Famer, Bobby Rush is set to release ‘Rawer Than Raw’ on August 28, 2020 on his own Deep Rush imprint in partnership with Thirty Tigers, a stripped-down tribute to the rich blues history of the Mississippi featuring a mix of originals and timeless blues classics by Howlin’ Wolf,  Muddy Waters, Skip James, Robert Johnson and Sonny Boy Williamson II. Rawer Than Raw is a sequel to Rush’s 2007 all-original album, Raw, his first acoustic effort that proved to be a game-changer for him, showcasing a different artistic side and exposing him to broader audiences.

Rawer Than Raw is a follow up to Rush’s Grammy nominated, Sitting On Top Of The Blues (2019), recorded in Jackson with engineer and executive producer Randy Everett. The two focused on some of Rush’s favorite artists, with whom he had a strong personal connection.

And what a refreshing album it is. With no band, no auto-tune, Rawer Than Raw takes you back to classic blues with good old fashioned storytelling, courtesy of Rush’s soulful and gritty vocals, acoustic guitar, harmonica and foot stomping. It’ll bring you back to simpler times for sure, a welcomed reprieve from today’s complicated world. Rawer Than Raw is a rare musical treat and a salute to the early acoustic greats as well as to Country blues with deep roots of the Mississippi, flush with Rush’s own personal style.

In 1971, Bobby Rush broke through on the national charts with funk grinder, “Chicken Heads” and is known as one of his signature tunes. The song was featured in the Samuel L. Jackson film, Black Snake Moan as well as the HBO series, Ballers. In the 1980s Rush cemented his reputation as a chitlin’ circuit legend, playing more than 200 shows a year and making appearances in documentaries The Road To Memphis and an episode of Martin Scorsese’s The Blues. By the year 2000, Rush earned his first Grammy nomination for Hoochie Man, and was nominated again in 2014 for Down in Louisiana and again in 2015 for Decisions, before winning his first Grammy in 2017 for Porcupine Meat. To date, he has earned 12 Blues Music Awards, 48 nominations and B.B. King Entertainer of the Year Award.

At the age of 86, Bobby Rush again returns to his roots on Rawer Than Raw, with soul-stirring songs such as “Down In Mississippi” (original) and his wonderful take on “Hard Times” retitled from the Skip James classic “Hard Time Killin’ Floor Blues” that open the record. Rush pulls from someplace deep, his voice so rich and soulful, his harmonica spinning tales of woe, his acoustic guitar resonant.

Rush pays homage to Muddy Waters with his own version of “Smokestack Lightning,” focusing in on the groove and foot tapping, his harp not unlike the horn of a train. And his harmonica solo is downright beautiful, rootsy, soulful to the bone.

There are more gems on Rawer Than Raw, with Rush’s own up-tempo rendition of Howlin’ Wolf’s “Shake For Me” and the beloved “Dust My Broom” (Elmore James). The latter features Rush’s acoustic guitar that’s so present it sounds like he’s playing right in front of you, along with his harmonica riffing that spins this tune into the 21st century. Rush spiffs up this classic with energetic gruff vocals and toe-tapping rhythm.

I love this album. Rawer Than Raw isn’t a rehash of blues classics blended with originals. It’s an outstanding release, raw and authentic, with Bobby Rush’s own personal stamp on each track. He’s one of the best and is still creating simply great music well into his 80s.

Listen to “Down In Mississippi”