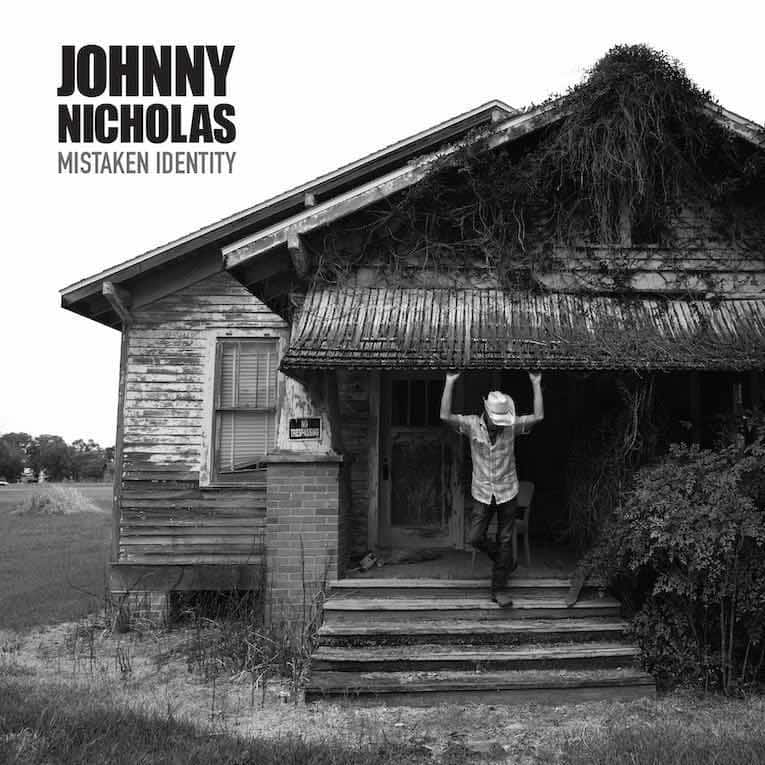 Eight (studio) albums into a successful solo career, former Asleep At The Wheel frontman, singer-songwriter and multi-instrumentalist, Johnny Nicholas, is back. New release Mistaken Identity, on Valcour Records, will be available digitally this August 28th, with physical formats following on October 2nd. Nine new tracks, plus the much-missed Stephen Bruton’s “River Runs Deep” have been recorded ‘live’ with overdubs kept to a minimum, produced and mixed by Cajun fiddle-supremo Joel Savoy. Throw in guitar virtuoso ‘Scrappy’ Jud Newcomb, recipient of multiple ‘Bass Player Of The Year’ awards, Chris Maresh, the wonderful drummer John Chipman and a host of top-flight backing players and you get the sense that something special might just have gone down here.

First cut “She Stole My Mojo” certainly bears that out. A delightfully playful, lyrically witty blues-rocker, the track occupies a territory somewhere between Muddy Waters and the Rolling Stones, yet with a distinctly Southern-country twist. Harmonica, guitar, bass and drums slip and slide across each other, fluid and supple. This is barn-yard stomping, open-sky fare, but with a veneer of urban polish and sophistication. Indeed, Nicholas has always eluded the trap of being pigeon-holed. Although he would be the first to tell you that everything he does stems from the blues, Nicholas describes himself as a player whose musical roots grow deep and wide. His boundless enthusiasm and wide vision make for a varied and yet consistent body of work.

The group which he has assembled for Mistaken Identity are equally capable of putting out stirring country sermons such as “Spark To A Flame” with verve and vigour. Nicholas’ knack for deceptively simple yet memorable lyrics remains undaunted. “Don’t put yourself above me, if you want to get to know, about the arson in my heart, when you call my name.” The timeless subjects of love and every-day livin’ provide endless fodder for southern writers. Nicholas manages to breathe new life into old themes. His eclecticism and fine ear mean elements of Western Swing, Cajun, Folk and even a little Jazz all sit comfortably in the mix.

Songs such as the intriguingly titled “Guadalupe’s Prayer” feel like unearthed jewels, immensely old and yet newly discovered, shining in the sun and scattered with a little honest dirt and grit. When Nicholas sings of “people’s dreams of freedom from oppression” and “crying angels” the lines are delivered with what used to be called “soul”. There’s more than a little frivolous fun here, too. “Tight Pants” delivers its hilarious message with all the wicked good humour of AC/DC. Nicholas’ wit coupled with the band’s top-class playing transform what could have been a throw-away into a tremendous rocking work-out, a wild, rollicking jam stuffed full of addictive licks and rolls.

“The River Runs Deep” reigns things back in, rolling soft and gentle. “You find that nothing is really yours to keep, you find love’s river, and that river runs deep,” sings Nicholas. Title-track “Mistaken Identity,” by contrast is a burning, shuffling comic tale of lust. From hard blues to ballads to barrel-house workouts and sincere tales with serious messages, this album continues Nicholas’ habit of looking to all musical corners for inspiration. Veering from one mood to another, Mistaken Identity almost feels like two or even three albums squeezed into one. Nicholas, by way of his consistently engaging lyrics and inventive arrangements, turns this into a positive.

An absolute standout, for this reviewer, “The Mule And The Devil” showcases Nicholas and the band at their very best. A not so subtle take on the vagaries of fame, this dusty blues is sharp as a tack and as potent as a rattlesnake. “You never saw it coming, and now you feel so all alone, you started out on Broadway, now the highway is your home.” Thankfully, for all fans of American roots music, Nicholas, on the strength of this latest offering, remains on the metaphorical Broadway, standing tall alongside the best.

The album can be pre-ordered digitally here: smarturl.it/JohnnyNicholas; and the CD or vinyl LP can be ordered at Valcour Records: http://valcourrecords.com/.