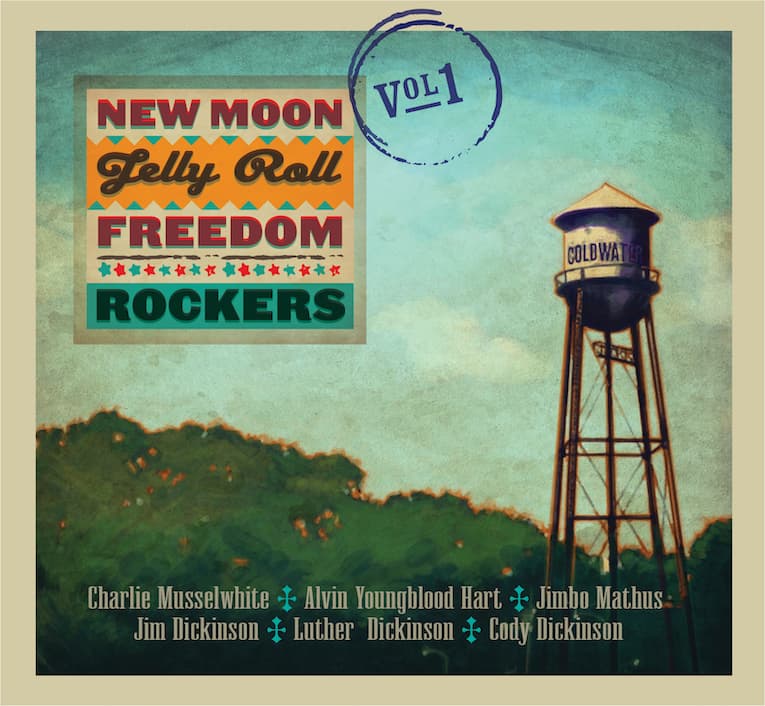 It’s fair to say that releases such as The New Moon Jelly Roll Freedom Rockers’ Vol 1 (available this September 4th on Stony Plain Records) simply don’t come along every year, or even every decade. On the face of it, this is a story that has everything, as full of pathos and myth as any Robert Johnson ballad.

Luther Dickinson explains, “The Dickinson crew doesn’t enjoy parties, but we dig recording sessions and we love hustling up new recording projects. The New Moon Jelly Roll Freedom Rockers project was one of our ‘potluck’ recording session albums. For potlucks, we invite a cast of characters to the session/party, and ask each player to bring a couple of songs. Musicians take turns leading and accompanying, and before you know it, a record materializes.”

Over two nights they laid down twenty-one tracks of improvised, undiluted roots music. Vol 1 contains the first ten recordings, with the remainder scheduled for release Spring 2021. Luther Dickinson and engineer Kevin Houston finished the production of the album, yet for the past twelve years these recordings have sat safe in an archive, unheard. The recording’s existence was mentioned obscurely in interviews and referenced as a great old-school recording by a few witnesses.

A few seconds of opener “Blues Why You Worry Me”, Musselwhite’s growling, muscular yet supple harmonica leads the way into a beautiful shuffling blues-rock. What strikes you immediately is how sympathetic and natural the playing sounds. Sure, there are a few rough edges (which is to be expected) but this isn’t a lay-about jam-session. These guys mean business. The atmosphere is amiable but tight. The interplay between harp, lead and rhythm guitars is a delight. Jim Dickinson’s piano adds so much to the mix, stabbing and running, filling space with shining high notes. The drums (presumably provided by Cody Dickinson) roll easy with strength and taste. The most telling moment comes after the music stops. At the very end of this track, you can hear the players laughing and chuckling, as if realizing that a bit of unexpected magic had just taken place.

“Come On Down To My House” is a joy, launching head-first into a New-Orleans rag-time inflected down-home workout. It shambles and twinkles and envelopes the listener in a cozy, overwhelmingly charming blanket of vibrato guitar, old-time piano and swaying drums. “Somebody else play” yells a voice. A fiddle makes an appearance. Singers echo each other and harmonize on the fly. Listening to this track is like experiencing fifty years of American roots music brought to life, distilled to its best and let loose. “That was nice,” comes a voice at the end “and nicely loosey-goosey”. Therein lies the secret of the spell which this album casts. These guys have nothing to prove. It’s clear that they’re having a blast. It’s also equally clear that each of them is committed to the hilt, and conscious of just how special this was.

Each of the players in the band has impressive individual resumes, but together they add up to a whole greater than the sum of its parts.  It is a testament to the great experience and talent of these esteemed performers that they could casually conjure a recording of this quality out of the ether this way, sounding as if the listener is right there in the room with them. New Moon Jelly Roll Freedom Rockers Vol 1 crosses the generations of new blues-rockers and classic blues statesmen.

Listen to “Blues Why You Worry Me (ft. Charlie Musselwhite)”