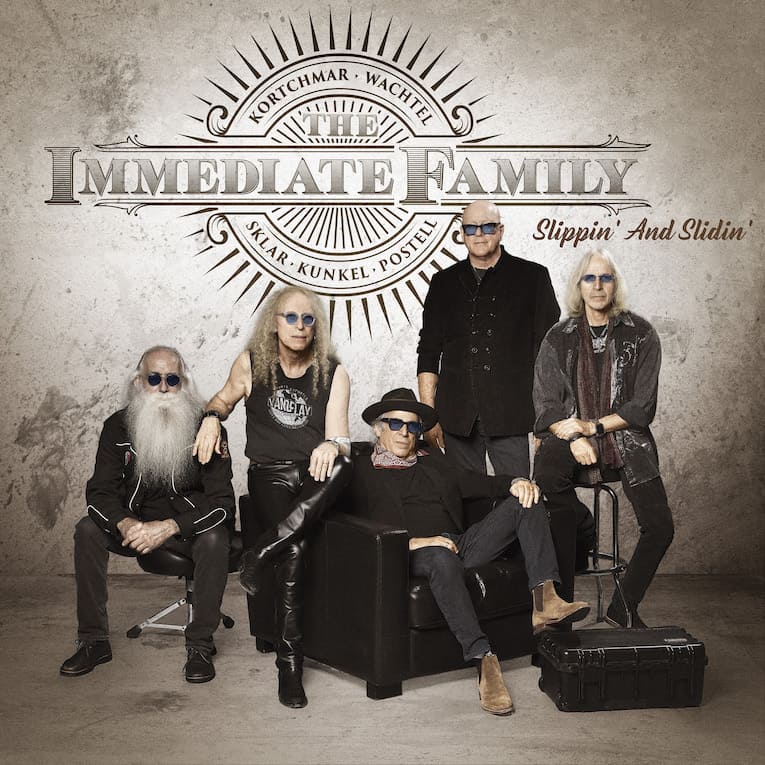 The Immediate Family release their second single “Slippin’And Slidin'” from their upcoming EP, also titled Slippin’ And Slidin’, out October 16, 2020.

The song was co-written by Waddy Wachtel with Danny Kortchmar and Tito Larriva, and Wachtel handles lead vocals. Wachtel was working with GRAMMY®-winning producer Greg Ladanyi on a project by The Cruzados, a band fronted by Larriva. Wachtel, Kortchmar and Larriva got together in the studio, and the song was born. “It was quite a joyous musical collaboration, and a hell of a night,” recalls Wachtel. “It’s a serious rock and roll song and the record that we, The Immediate Family, made of it delivers like a runaway train. We are so proud that we are the ones who get to show this song to the world.” The single was recorded at Groove Masters Studio and Katonah Studios, engineered by Niko Bolas and Steve Postell, and mastered by Richard Dodd.

The Immediate Family, which was formed approximately two years ago, has been performing live and has released new music in Japan and Asia. QVR signed The Immediate Family to a multi-album deal and will be releasing the Slippin’ And Slidin’ EP on October 16. The five-song collection will give fans a deeper look into the music of this rock and roll powerhouse. A Denny Tedesco documentary about their iconic careers is also in the queue for release in 2021.

Scott Goldman, Host/Moderator, GRAMMY Museum® Public Programs, heard the single and remarked, “The Immediate Family has the cure for the social-distancing blues. ‘Slippin’ And Slidin’’ is a slice of rock and roll heaven!”

Remarking on the song, Christian Swain, Founder & CEO of Pantheon Media, DIY & How Studios and the Rock n Roll Archaeology Project, adds, “Not surprising to hear such a clean and tight down home rock ‘n’ roll song, co-written by Waddy Wachtel, but here being played by the legends of The Immediate Family band. A cool dobro slide hook slips and slides in and out, while Waddy growls his way through the femme fatale lyrics and the rest of the ‘Family’ follow in pursuit throughout the song!”

Danny Kortchmar’s credits as guitarist, producer, songwriter, and session musician include work with James Taylor, Don Henley, Carole King, Linda Ronstadt, Jackson Browne and Billy Joel, among many others. As a songwriter, Kortchmar has both written alone or collaborated with numerous artists, penning indelible tracks such as Don Henley’s “Dirty Laundry,” “All She Wants to Do Is Dance,” and “New York Minute,” as well as Jackson Browne’s “Somebody’s Baby” and “Shaky Town,” to name a few.

Legendary guitarist, producer and songwriter Waddy Wachtel has worked with many of the same artists as Kortchmar, as well as artists like the Rolling Stones, Keith Richards, Stevie Nicks, Randy Newman, Bryan Ferry and the late Warren Zevon, with whom he co-wrote and produced a number of hit songs including “Werewolves of London,” which The Immediate Family has included in their set list. Wachtel’s production work includes Keith Richards, Bryan Ferry, George Thorogood and The Church, and he has composed numerous scores for feature films.

Leland Sklar has performed in the studio and on tour with Phil Collins, James Taylor, Toto and Billy Cobham, to name a few. Actually, Sklar has the most credits of any of the members of The Immediate Family, having worked on over 2,600 albums.

Steve Postell is a seasoned touring and session player who has worked with David Crosby, Jennifer Warnes, Michael McDonald, John Oates, Robben Ford and many others. He recorded and mixed the final 3 performances of Ravi Shankar, and has scored films including “Dying To Know” about Timothy Leary & Ram Dass and narrated by Robert Redford. He has released several solo records, including the critically acclaimed “Time Still Knockin’” on Immergent Records.