Review: ‘Too Far from the Bar’ Sugar Ray and the Bluetones Feat. Little Charlie 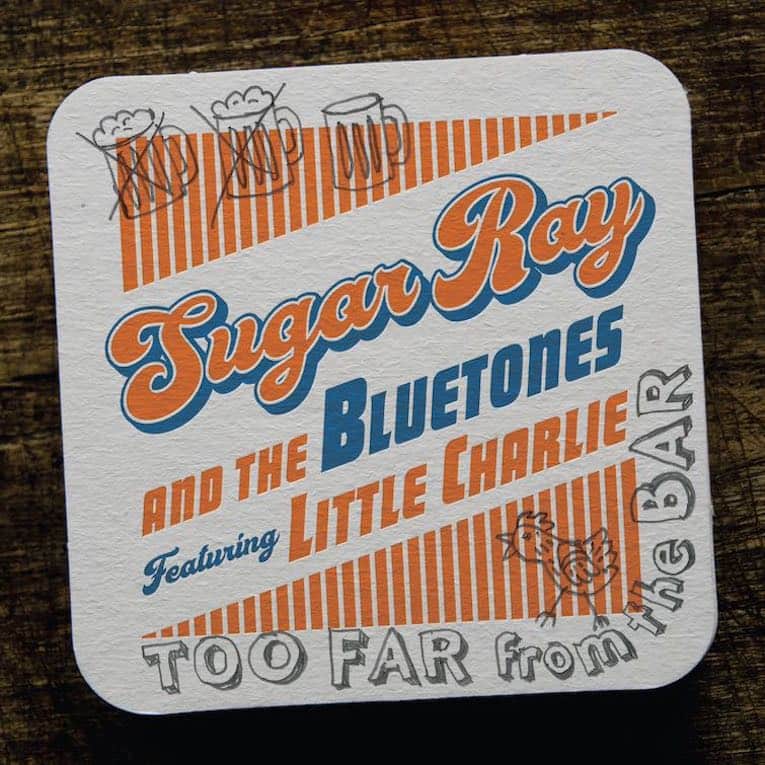 Sugar Ray and the Bluetones

Sugar Ray and the Bluetones featuring Little Charlie Baty take fans of top-shelf blues on a rocket ride on the group’s new effort Too Far From The Bar. The set touches down September 18th, 2020 on Severn Records and brings listeners into direct contact with some of the finest blues musicians the genre has ever produced. Produced by Roomful of Blues founder and legendary guitarist/vocalist Duke Robillard, Too Far From The Bar captures vocal and harmonica ace Sugar Ray Norcia getting sweet and lowdown with a muscled-up band comprised of Little Charlie Baty (guitar), Anthony Geraci (piano), Michael Mudcat Ward (acoustic bass), and Neil Gouvin (drums). Robillard even sits in on four songs, which makes this already-extraordinary record that much cooler.

Too Far From The Bar contains some of the last recordings of beloved guitar star Little Charlie Baty, who passed away unexpectedly in March 2020. Baty was a deep, multifaceted, and spectacularly talented guitarist who, along with frontman Rick Estrin, made his bones in the eternally-popular blues band Little Charlie and the Nightcats. Baty forged a high-energy playing style based in blues, jazz, surf music, swing, and anything else he ever heard that was known as one of the most compelling and overwhelming sounds in the blues business. Putting him and Robillard together with top guns like Norcia, Geraci, Ward, and Gouvin was a genius move that resulted in one of the mightiest blues records put down in the modern era. “Little Charlie was so excited about this project and what a thrill it was to record together,” Sugar Ray said about the sessions.

Sugar Ray gets his party started with a flat-out jumping rendition of The 5 Royales’ “Don’t Give No More Than You Can Take,” a dance-inducing shuffle that’s all taste, tone, and class. Ward and Gouvin groove like a house on fire on bass and drums and create a pocket that lets Norcia, Baty, and Geraci burn it on down to the ground. All of these players have this vintage blues dialect on lockdown and it’s a treat to hear them letting it fly. Sonny Boy Williamson’s “Bluebird Blues” follows and keeps the righteous vibes pumping. Norcia tears into his harp with the fervor of a brimstone preacher while the band lights up behind him. The cut is a big dose of mid-20th Century magic that’ll remind you of why you started buying blues albums in the first place.

The title track, “Too Far From The Bar,” is an uptempo jump blues and Norcia original that revs everyone playing up to their maximum horsepower. Little Charlie demonstrates why he’s already missed so badly, turning in lead and rhythm guitar performances that display his unequalled touch and skills. Geraci spanks his piano like it owes him money while Sugar Ray holds this epic drinking song together from the lead vocal position. The track is so hot you might need new speakers after it smokes on through.

The instrumental “Reel Burner” is Sugar Ray Norcia’s harmonica showcase and he works every nook and cranny of this intensely-swinging track. His vocabulary is seemingly endless and his energy never falters. The band keeps it cooking and, for a moment, all’s right with the world. An alternate take of “Reel Burner” closes the record and is just as much fun as the first one. Other highlights on the album include Jerry McCain’s “My Next Door Neighbor,” Otis Spann’s “What Will Become Of Me,” and Anthony Geraci’s rocking “From The Horse’s Mouth.”

Too Far From The Bar is an all-night bash from end to end and its greatness is undeniable. Get all over it and stay there.

Sugar Ray and the Bluetones Online