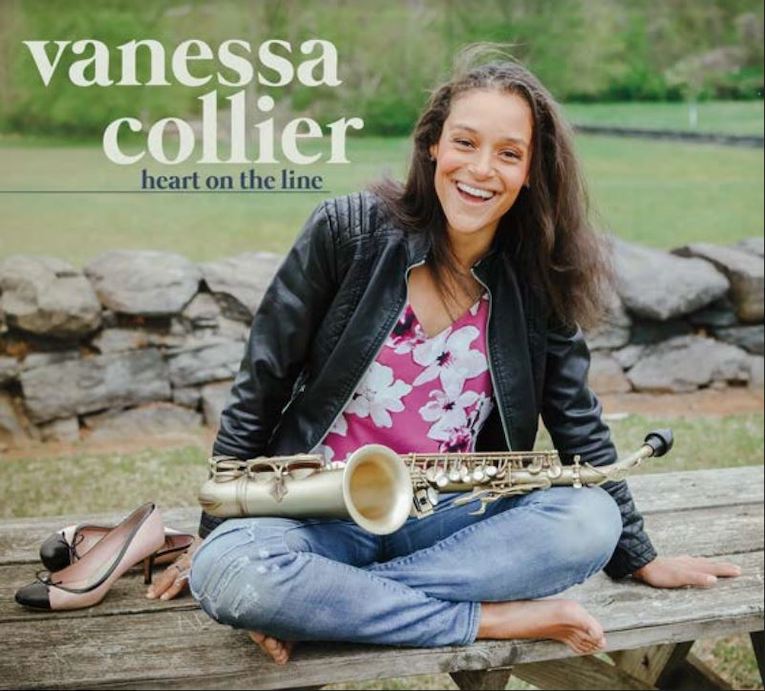 It’s fair to say that any musician talented enough to impress the great Buddy Guy is worth following. Blues saxophonist, multi-instrumentalist, singer and songwriter Vanessa Collier is just such a person. Since graduating from the Berklee College of Music in 2013 (with dual degrees in Performance and Music Production & Engineering), Collier has amassed a staggering collection of prizes and nominations, including two Blues Music Awards for “Horn Player of the Year.” While still studying, Collier toured extensively with Joe Louis Walker. Since then, she has performed both nationally and internationally. Following three well-received albums in the last six years, she’s back with the crowd-funded Heart on the Line.

Heart on the Line, which is also produced by Collier, features eight original compositions and three covers. It kicks off with a re-working of James Brown’s “Super Bad,” a song eminently suited to Collier’s edgy, softly burning voice. The arrangement is wonderfully wide and airy, with rattling, jangling percussion pulling you in all directions. Collier keeps that classic vibe, with a driving, menacing undercurrent, but firmly stamps her own mark with bright and breezy production and, of course, a healthy dose of sax.

Collier’s sax playing is beautifully smooth and mercurial, timed to perfection on her brief solo, utilised powerfully elsewhere to push and lift. “Bloodhound,” in contrast, is built on country blues, full of moaning resonator guitar, plodding bass and brushed percussion. The track alternates between quieter, stripped back passages and brief flashes of burning, shuffling rock. It works incredibly well.

Throughout this set, Collier’s band are dynamic, sympathetic and inventive. Nick Stevens on drums/percussion (plus an instrument new to me; the shuitar), C. C. Ellis, Scot Sutherland and Cornell Williams on bass, Laura Chavez on electric guitar, William Gorman on keys and Quinn Carson, trombone are a first-class crew. Displaying that ‘relaxed tightness’ which all musicians aspire to, they do a fine job over a variety of styles. Witness title-track “Heart on the Line,” which plays out as a sawdust, Grand Ole Opry pop number, successfully marrying hillbilly folk-blues to a contemporary, shining arrangement with plenty of hooks and pleasing side-turns. With hand-clap percussion, bouncing, swooping horns and sing-along chorus, this song deserves a large amount of airplay. Collier’s sax is at its very best here, snaking in and around the other players, weaving it all together like a silver ribbon around an enticingly wrapped present.

Every step along this musical journey brings a new facet into play. “Take a Chance on Me” rumbles and roars with heavy bass and electric guitar; a compelling nod to Hendrix (if Hendrix had a killer horn-section). “What Makes You Beautiful” lilts and sways with stirring rhythm-guitar, R&B harmonies and buzzing organ. “Who’s in Power” opens like a lost Stevie Wonder classic, with rhythmic, pumping lines and a politically aware message. It’s wonderful to hear a blues player addressing such subjects with invention and honesty.

Part of the joy which comes from writing about the blues lies in encountering musicians who are passionate about their craft. Blues, like jazz and other forms of roots and folk music, engenders a special love both in those who commit to playing it, and those listeners who connect with the timeless sense of pathos and unity which such art forms project. Collier gives much to the blues, not only via her music, but also through clinics which she runs as part of the “Blues in the Schools” project. “I am driven to do this because I find it a total form of expression and connection,” says Collier. “I hope to inspire people to follow their dreams and passions, to find what brings them joy, and then to pursue it doggedly.”

Heart on the Line is not only the product of a worthy, committed individual, it is a fine blues-rock album which you should definitely check out.