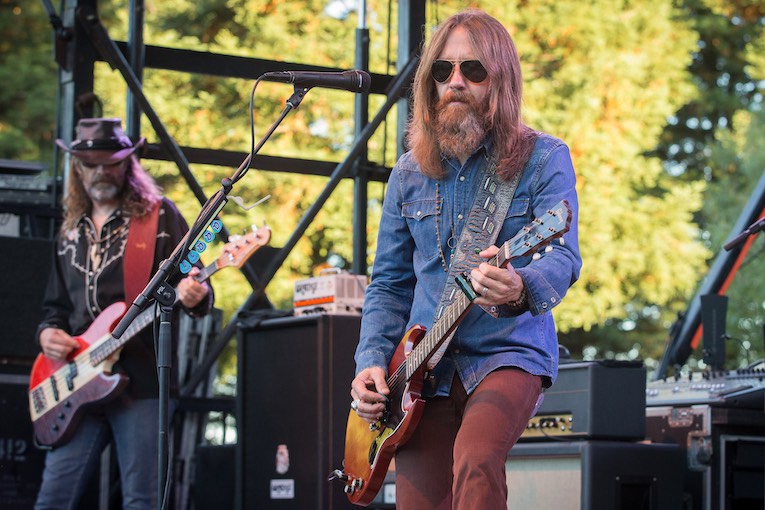 Like most music fans, I’ve been struggling with the inability to attend live music shows since the outbreak of the Covid-19 pandemic. When I finally got the opportunity to attend an outdoor show from one of my favorite bands, I jumped at the chance. When Blackberry Smoke announced they would be playing a show at the Yarmouth Drive-In on September 15, 2020, I went all-in. The show was on a weeknight? No problem. It would require a round trip drive of over 160 miles? No worries. Anything for live music now.

When Drive-In Concerts were first announced, I was skeptical. The first shows required attendees to stay in their cars and listen through their car radios (just like a drive-in movie). This did not appeal to me at all. Later, several venues announced plans to allow attendees to sit or stand in an assigned area next to their vehicle. To me, this was much more promising. The Yarmouth Drive-In in West Yarmouth, MA was one such venue.

The day of the show dawned and my excitement over seeing not only Blackberry Smoke but live music again, was palpable. Since we were past Labor Day and still in the middle of a pandemic, I assumed it would be an easy drive with no traffic. Big mistake. You would thought it was rush hour. The traffic leading out of Boston was not just heavy but had slowed to a crawl. This was early afternoon…how was the possible? So much for spending some relaxing pre-show time near the venue.

Yarmouth Drive-In indicated that the gates opened at 6:30, the concert kicking off at 8pm. After battling the traffic gods, it was a miracle that we jumped in line 20 minutes prior to the opening. Navigating to our “vehicle suite” went off without a hitch. Full disclosure, I splurged and bought a ticket for a vehicle suite in Row 1.  We were directed to our spot as close to the stage as one can get in these Covid times at these type of venues.  We were about 30 feet from the stage with nothing blocking our sight. Like all the vehicle suites at the venue, ours was a nearly 300 sq. ft. roped off area.  We parked on the right edge of our suite and the rest of the space on our left was ours to sit, stand in and enjoy the show. Masks were required anytime we were outside of our vehicle.

After placing our orders for food and drinks, we waited for a text notification to let us know it was ready. I picked it up and went back to our spot.  This system worked well as it virtually eliminated any lines at the concession/merch area. That’s a new one for any concert I’ve ever been to.

It was now dark, anticipation building in our vehicle suite. But it was definitely strange to look around at all the vehicles and small groups of people in their suites.  Unlike a normal venue in normal times, it was hard to sense the crowd anticipation as the social distancing and mask requirements limited interaction between fans. 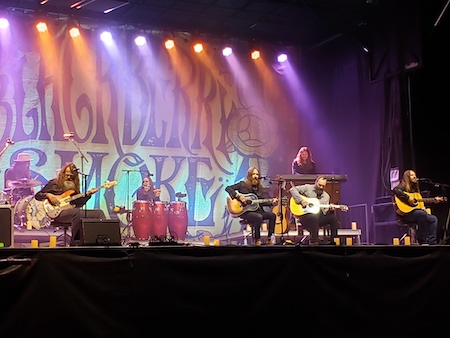 Opening for Blackberry Smoke were blues/roots rockers Nick Perri and the Underground Thieves. I didn’t know much about them.  As I was looking at the elevated stage (although not as elevated as I expected), there was a commotion and the band walked out from the wings.  Something was amiss. Only three of the six band members came onstage (singer and guitarist Perri; bassist Brian Weaver; and drummer Zil Fessler). Perri picked up an acoustic guitar and jumped right into the music. Where was the rest of the band? Wasn’t this supposed to be a plugged in show? Taken by their rootsy sound and strong vocals, I gave into the experience and enjoyed the music. Perri did make cryptic references to playing acoustic but offered no explanation for the absence of the rest of the band.  The band’s well received set of originals ended with a passionate cover of Neil Young’s “Hey Hey, My My (Into The Black)”.

During the changeover before the Blackberry Smoke set, I noticed their road crew setting up for an acoustic show with individual barstools for each player.  This was odd as I thought they were going to play a plugged in electric show.  Since the band performs in both formats, they are always careful to label a show as acoustic and this show had not been advertised as such. I enjoy Blackberry Smoke in both formats so I wasn’t upset, just confused.  Based on banter from the stage and then confirmed the next day, I soon realized that noise complaints from residential neighbors forced the switch in formats. The venue borders a residential neighborhood and the complaints came during the afternoon plugged-in sound check the previous day. The band handled it with grace but made some amusing “Karen” references during onstage banter and lead singer Charlie Starr said, “Since we have all been locked up since March, would I have made that complaining phone call…would I?”  I’m still somewhat surprised as this venue has been staging these type of shows for a couple of months now.

The band opened with “Columbus Stockade Blues” an old tune associated with Doc Watson. The remaining 19 songs included two more covers, Aerosmith’s “Hangman Jury” and “You Got Lucky” from Tom Petty and the Heartbreakers.  The majority of the remaining 17 originals came from their “The Whippoorwill”, “Find A Light” and “Holding All The Roses” albums.  Highlights of the excellent set included “No Way Back To Eden”, “Mother Mountain” and “Living in the Song”. Long time concert staples “Best Seat In The House”, “Ain’t Got The Blues” and “One Horse Town” were well received as was “Run Away From It All”, referred to as a “Covid 19 love song” by lead singer Charlie Starr. As with many of Blackberry Smoke’s gigs, the show ending “Ain’t Much Left of Me” brought people out of their chairs and received rousing applause. However, it was nowhere near the crowd noise of a normal show because of the social distancing.

Blackberry Smoke was in fine form overall and the relatively recent addition of brilliant multi-instrumentalist Benji Shanks provided an added depth and breadth to the band’s catalog, especially when performing acoustically.  The guitar interplay between Starr and Shanks is something special, while also allowing Starr to focus more on his vocals without bearing the burden playing lead guitar on every song. The acoustic format also brings to the fore what I consider the secret weapon of Blackberry Smoke; their brilliant vocal harmonies. These harmonies set Blackberry Smoke apart from most other bands in my mind. In particular, the high harmonies provided by rhythm guitarist Paul Jackson are a key feature in much of the band’s catalog.

An interesting twist, much like one of their key musical influences, the Allman Brothers Band, Blackberry Smoke teases other songs and performs sections of different tunes before returning to the song they originally started.  A “You Don’t Know How It Feels” segment in the middle of “Sleeping Dogs” and a “Losing My Religion” coda to “You Got Lucky” were prime examples. The real curveball came on the last song where Starr riffed on Alice Cooper’s “Only Women Bleed” before breaking into the show finale. I was stunned by this but it was difficult to sense the reaction from the rest of the crowd due to our isolation in our suite.

Since we were allowed outside of our cars, I assumed that it would be a standard outdoor show with a wall of amps and speakers projecting the sound out to the crowd. Instead, most had to tune their car radios to a specific station to hear the band. But being in the front row, we were lucky and didn’t have to deal with that. We could hear everything from the stage and the sound was fine. For others farther back, I’m guessing that the quality of their car stereos significantly impacted their listening experiences.

Drive-In Concerts in the time of Covid. Last night I completed my journey from skeptic to satisfied customer. Obviously not the same as a great packed venue, but at this point, I’ll take what I can get.