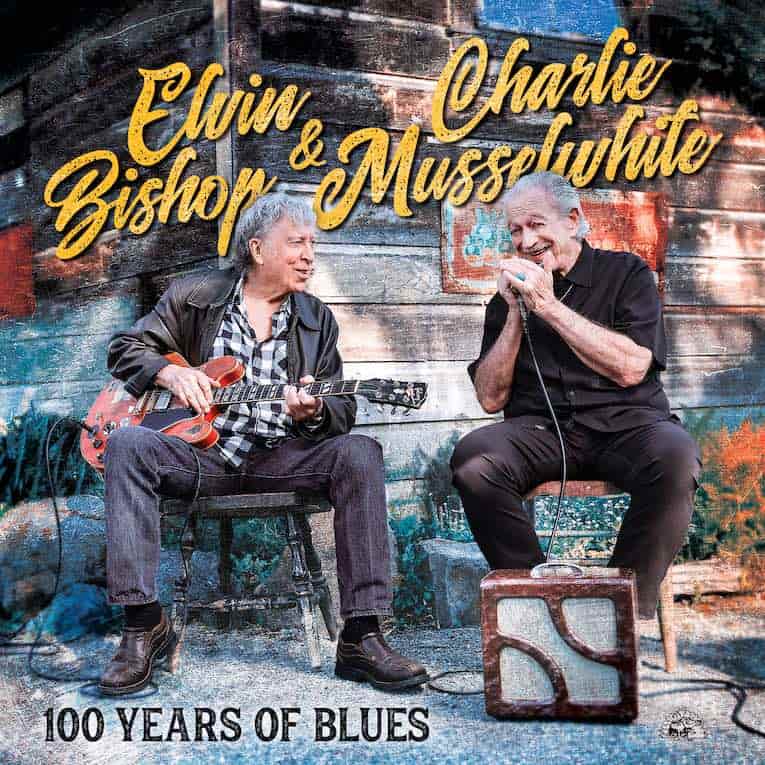 Rock And Roll Hall Of Fame guitarist Elvin Bishop and Grammy-winning harmonica player Charlie Musselwhite drop their first-ever album as a duo, 100 Years of Blues, September 25th, 2020 on Alligator Records. Both have long, distinguished musical careers that reach back to the 1960s, have toured the world and elsewhere, and have tracked dozens of albums but have never released a record of just the two of them putting out their blues. That’s a little surprising, considering that they’re close friends and fishing buddies, but life is busy when you’re among the finest blues musicians in the world. Produced by Kid Andersen, 100 Years of Blues is a lowdown, back porch type of session that features nine new original songs by Elvin and Charlie and covers of numbers by Roosevelt Sykes, Leroy Carr and Sonny Boy Williamson. It’s the kind of set blues fans love the best: unadorned, raw, and real, with nothing to get in the way of what these two do best.

Elvin and Charlie have been soaking the blues up since their childhoods in the American South. Bishop came up in Oklahoma and Musselwhite in Mississippi and Memphis, Tennessee. Both began playing their instruments with no plans to become pros but both also wound up in Chicago, the blues capital, in the early 60s. Bishop came north to attend college and Musselwhite came looking for work. They ended up being some of the only white faces in Chicago’s South Side blues clubs but were quickly accepted by the veteran musicians they met – Elvin by Little Smokey Smothers, Hound Dog Taylor, J.T. Brown, and Junior Wells, and Charlie by Big Joe Williams, Big Walter Horton, and, eventually, by Muddy Waters.

Both men went on to win fame by introducing blues music to the rock and roll crowd. Bishop did it with The Paul Butterfield Blues Band and his own genre-bending Elvin Bishop Group and Musselwhite made his mark with his wide-ranging and influential recordings as the leader of his own band. The two have remained in the top level of American musicians ever since and have become permanent parts of blues history.

100 Years of Blues jumps right in from the first song “Birds Of A Feather.” It’s a classic Elvin Bishop original that puts his immense personality on immediate display. Bishop and Musselwhite are supported on it by Bob Welsh on second guitar and Kid Andersen on stand-up bass. The track is loud, raucous, and gets this party off to an amazing start. The guitars are gritty, the groove is fat, and Musselwhite’s harp tone is off-the-charts cool. Roosevelt Sykes’ “West Helena Blues” is up next and gives Musselwhite all the room he needs to shine on vocals and harp. Bishop’s guitar is tough-toned and he knows just how to approach this sort of slow, country blues. Bob Welsh adds some mighty nice piano playing into the mix and does much to keep the track’s pocket moving along.

“Good Times” is a Musselwhite original and gives Charlie a chance to rock some slide guitar and throw down some serious blues. Many fans don’t realize he plays guitar this well and will find the song to be a more-than-pleasant surprise. Musselwhite’s vocals are haunting and melancholy and do an outstanding job conveying the heartbreak of his lyrics. “Blues, Why Do You Worry Me?” is another Musselwhite song with a strong shuffle to it anchored again by Welsh on piano and adorned by Bishop’s guitar.

Bishop, Welsh, and Musselwhite also turn in a powerful take on Sonny Boy Williamson’s ever-popular “Help Me” and make this familiar cut come alive in this lower-impact format. Like the whole set, these three make capturing the essence and nuance of blues music sound like the easiest game in town. The record ends with the title track, “100 Years Of Blues,” which recounts Bishop and Musselwhite’s lives in the blues and makes you wish you’d lived them, too. It’s a fitting closer and both share lead vocals while weaving their instruments in and out of the spaces between them. 100 Years Of Blues is an antidote for the plastic poisoning that’s overtaken so much modern music and the simple sound of these two masters in a room playing together is absolutely joyous. Enjoy every moment of this fine release and let it make your 2020 a better place to be.

Listen to “What The Hell”