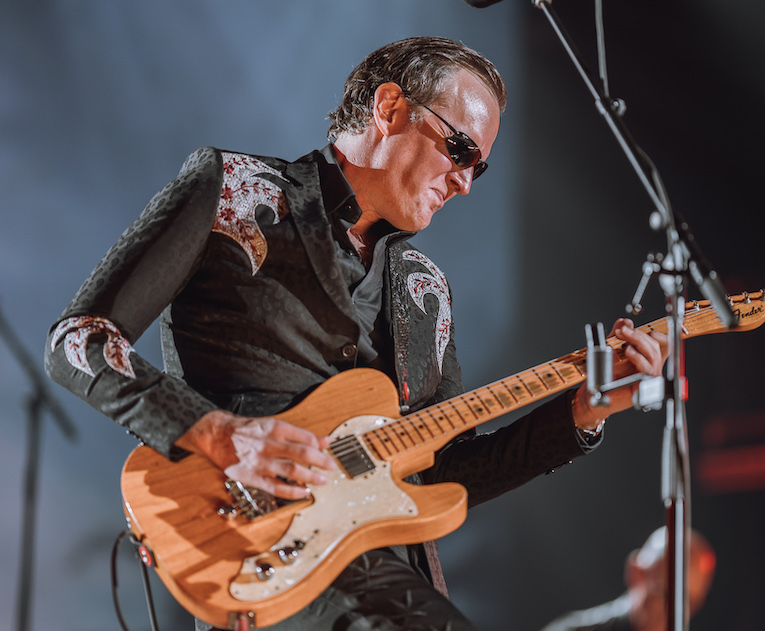 Blues/rock guitarist, singer-songwriter, Grammy nominee, Joe Bonamassa and his superb band performed the first of its kind pay-per-view virtual concert from The Ryman Auditorium, Nashville TN, on September 20, 2020. It was livestreamed worldwide.

It was a first for Joe Bonamassa fans to hear him debut an upcoming release, Royal Tea, out October 23rd 2020, a record inspired by his British heroes Jeff Beck, Led Zeppelin, and Cream. Presented by Bonamassa’s ‘Keeping The Blues Alive Foundation’, each ticket included a donation to his ‘Fueling Musicians Program,’ which supports musicians in need due to the COVID-19 pandemic.

With impressive production and great sound, blues/rock guitar master Joe Bonamassa and the band pulled off a top tier show. The band included Reese Wynans on keys, Michael Rhodes on bass, Greg Morrow on drums, Rob McNelley on guitar, Jade MaCrae and Dannielle DeAndrea on backing vocals and Jimmy Hall on harp and vocals. Bonamassa’s live shows tend to be flawless anyway and this virtual performance was no different.

Except for the weirdness of an audience of carboard cutouts with photos of VIP ticket holders who generously donated to Bonamassa’s worthy cause. Surreal? Yes. Understandable and even commendable for undertaking this kind of a show? Definitely.

Dressed in a black jacket with colorful sequined designs and black boots, Joe Bonamassa opened the show with a ripping number, “When One Door Opens” from Royal Tea, the rock side of blues, complete with jaw-dropping guitar solos fans have come to expect from him. Band members were also dressed in black except for the two backing singers who were in maroon velvet button down jackets with epaulets on the shoulders.

At the end of the first song, the lights dimmed as Bonamassa changed guitars. Silence hushed the dark stage. The song, “Royal Tea” then roared onto the scene, kicking off with the backing singers and Joe on vocals. The guitar riffs alone were enough to get your foot stomping, paired with Joe’s ode to Jeff Beck’s guitar tone and style, even if you weren’t there to witness it for yourself in person.

Having seen a few of Joe Bonamassa’s live shows, it wasn’t completely out of character for him and his band to remain fairly rooted in place on stage. But because of the absence of a live audience, let’s just say that he and the band pulled it off in true Bonamassa A+ fashion. 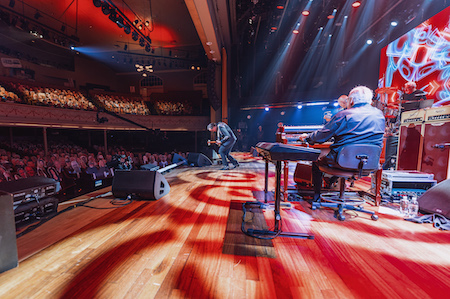 Bonamassa acknowledged the weirdness by asking the audience, “How’s everybody feeling out there? (Echo) “It’s a little quiet in here but you’re all here in spirit.” And we were, grateful for his humor. It probably didn’t escape most viewers how strange this year has been and that the concert was a bit of a microcosm of that reality.

The camera work for the evening played a much bigger part than even a live concert film, zooming in on Bonamassa’s dazzling guitar work and up close while singing, on other band members’ performances, and on the backing singers who swayed and danced to each song.

Michael Rhodes jump-started “Lookout Man” with a throbbing bass riff on this rocking, hard driving number. When Jimmy Hall (singer, harmonica player) appeared with smooth and soulful, almost haunting harp, the camera focused closely on him and his wizardry, offering a view one might not necessarily see during a ‘normal’ live concert performance. Joe’s vocals were in fine form on this tune, and when he riffed on his guitar, you could almost imagine a crowd there, energized and ecstatic over this rock tune with plenty of groove and heavy drums.

Again darkness and silence on stage when the song concluded.

“Why Does it Take So Long To Say Goodbye” was a standout with a beautiful melody and chord changes. Joe’s vocals were soulful, rising and falling with emotion, as were his guitar chops.

The band, as always, was super-tight, a strong wall of sound. Bending and swaying with passionate guitar playing, you could feel Joe’s emotion.

After “A Conversation With Alice,” Joe said to the audience, “Speaking of conversations, let’s have one, Ladies and Gentlemen out there in cyber world.” He spoke about performing at The Ryman Auditorium, and added, “Thank you to the people who subscribed and donated. I know this is a weird, weird year. You may not hear or see any applause because what I wanted to do was take a snapshot of the year. So when we end the song, it’s dead silence. I wanted a snapshot of our lives this year.”

Addressing the surreal quality of the situation seemed to lighten the feeling. He later joked about having played for tough crowds before and asked ‘peopl’e to stand. Bonamassa and the band then launched into the knockout shuffle, “Lonely Boy.” Loosened up, his vocals were emotive, and the song featured his impressive vocal range. An uptempo boogie, Jimmy Hall appeared again for some classic harp, following by a stunning guitar solo by Bonamassa, this time on a Telecaster. Most fans know that he has a museum of guitars and this was one of many beautiful instruments he played this night.

After a four minute intermission with piped in classical music, Joe Bonamassa and his band rocked it out on a Rory Gallagher cover, “Cradle Rock” from his recent 20th Anniversary album A New Day Now, another standout.

The virtual concert closed with the Jethro Tull gem, “A New Day Yesterday” performed with mind-blowing guitar licks and the band locking it down.

All in all, it was a spectacular performance despite the weirdness. A massive production to undertake, Joe Bonamassa put on an amazing show that couldn’t have been easy for him or the musicians but he did it with his usual mastery and professionalism.