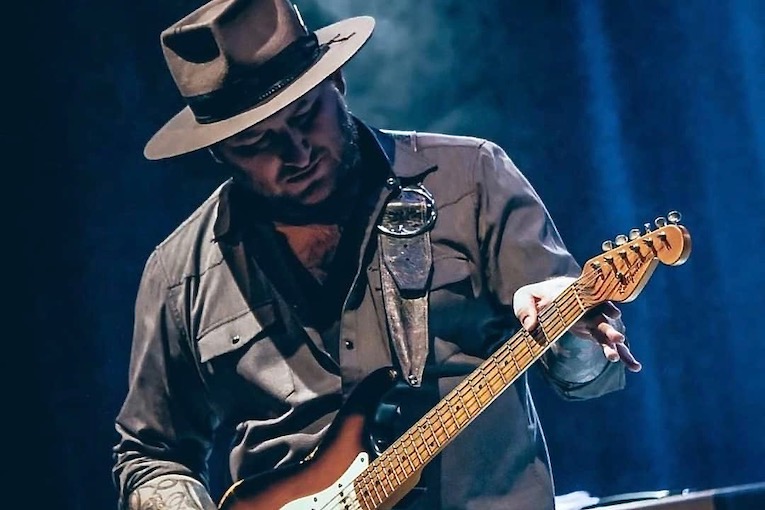 Master blues/rock guitarist, singer-songwriter and producer, Josh Smith is known the world over as one of the finest guitarists. Josh blends his signature mix of blues, rock and jazz into dynamic original songs, and is known for his incendiary performances whether at the Grammy Awards or the Kennedy Center Honors with Mick Jagger, Raphael Saadiq and others. He also tours the world, recording and performing with renowned artists such as Joe Bonamassa, Eric Johnson, Andy Timmons, Kirk Fletcher and others. Smith began his career opening for B.B. King for a two-year run and shared stages early on with Jimmy Thackery, Chris Duarte, Kenny Neal, Tinsley Ellis, Lucky Peterson and others.

Smith’s 11th album, Live At The Spud, was released in 2020 to critical acclaim and features him and his power trio recorded live at the legendary Baked Potato in Los Angeles.

Josh: As far as Joanna’s record, we (Josh and Joe Bonamassa) just finished mixing that, so it’s off to mastering. I’m very proud of that one. It came out great. Joanna really, really brought it. And especially singing. She just sang her butt off. I think people are going to be really shocked. I know for sure they’ve never heard her sing the way she sings on this record.

Josh: Everybody knows how good a guitar player Joanna Connor is. I think she found a singer that she hadn’t really tapped into 100% yet. Joe (Bonamassa) really pushed her hard. Harder than maybe I was comfortable to push her. But the end result was something I don’t think we even thought was in there when we got started. We didn’t know we were going to get that vocally from her, and that was a big surprise. I look forward to hearing that. Also the material is very raw. The thing about Joanna is when people hear her and see her, what’s readily apparent is the moment of “Holy cow, listen to the aggression, the passion, the attack that she has in her playing.”

We wanted that on every moment. We didn’t want any filler. We wanted to highlight her as the star of the record. We basically mandated from top down like, “You’re going to be the star out front, you’re going to sing, you’re going to play all the guitar solos and fills like you’re out in front of the band and we’re backing you up.” Joe and I played all the rhythm guitar and she played nothing but fills and solos. We really just highlighted her. And we told her, “We want to take those moments that make you so special and put them everywhere.” And that was our goal on that record.

Martine: What a thrill–exciting. Probably for her too.

Josh: I know she had a blast and if anybody deserves to get some sort of a boost, if anybody’s put in their dues it’s Joanna Connor.

Josh: Everybody knows how good Eric Gales is. It’s not a matter of getting good guitar playing on the record. That just happens. We were trying to take him somewhere he’d never been, which is better songs, better production, better arrangements and most importantly better singing so that people feel it in a different way.

Eric is fresh. We worked the last 11 days in Nashville, and I can guarantee you he’s never spent as much time on the vocals. We were warning him for six months in advance how it was going to go. And I still think he wasn’t quite prepared for—”No, we need that again.” (laughter) It was a different process for him, that to his credit, he bought into. I’m 100% certain that we’ve made the best Eric Gales record of all time. And I can tell you this because, well, Joe and I love Eric very much. I’ve been a fan of Eric since I was a kid and same with Joe. 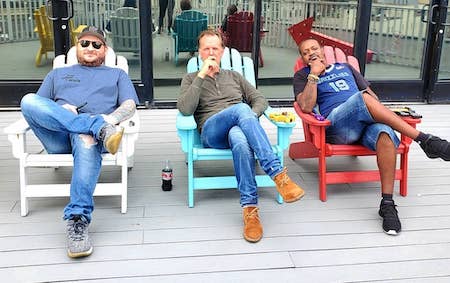 There’s no denying Eric’s brilliance. And everybody who sees him live sees it. All guitar players understand it. Our mission was to make that very clear to anyone else who had never seen him. If we put him in a package that the whole world can understand and let him be brilliant on top of that, it can take him to a whole new level. That’s really what we’ve tried to do. We literally put more effort into pre-production, writing, and just the whole process on Eric’s record than we put into our own records because we wanted so much to make this special, because we love him and because we want him to get the attention that he so rightfully deserves.

Josh: He’s lived through what he has lived through. It’s made him a very special person. He’s a special talent who certainly was given a gift but who also nurtured that gift and worked very hard to become as special as he is. I don’t believe in it’s just 100% a gift from above or whatever. No, no, no. He’s put in the work. He’s gotten so much better even in the last 10 years as a player. It’s staggering.

We were very focused on making it as great a project as we possibly could. We’ll have to wait to see what people think when it comes out. But there’s ‘goosebumps moments’ on it, obviously from the guitar playing. It’s easily the strongest songs he’s ever done and the strongest singing, the strongest production. I’m excited about it.

Martine: Are you working on a new album of your own?

Josh: Yeah, I have another normal quote, unquote Josh Smith album basically done. It’s a follow up to Burn to Grow, which is my last studio album. More like my normal stuff—blues/rock with some soul and jazz in there. All original songs of course. It’s a little more rock-y.

Martine: Is it your trio or did you bring other people in?

Josh: Some of it is just the trio. And some of it has some guests on it, like Reese Wynans plays organ on a song. My friend Joey Landreth sings on a ballad I wrote. He’s incredible, I mean an incredible musician and guitar player and his voice is very special. It came out great. He was the first guy I thought of. I sent it to him, he’s staying at home during the pandemic, and he crushed it.

Martine: How’s it been for you with the pandemic and being at home? You’re used to touring a lot. Has it been a creative time for you?

Josh: No, I wouldn’t say overly creative. It comes and goes in spurts. Especially at the beginning, I wasn’t creative at all. I was just like most people, in a malaise, just kind of depressed. That’s what happens when the rug gets pulled out from you. You lose all your gigs. Not only did I lose a ton of touring, I lost Greg Koch– he had recorded three songs here and was going to come back and do the rest of his album and I was going to produce it. Well, he finished it at home. He actually canceled his tour right at the beginning of the pandemic. I had another one that was scheduled that will probably happen next year.

And you know, the other part of the dynamic is, I’m never home for six months in a row. I’m sure my wife and my son are tired of me. They probably really enjoyed it last week when I was in Nashville. (laughter) We did the Eric Gale’s record in Nashville and just doing that was really weird, being on a plane. They’re not wearing masks quite as stringently as they are here. Restaurants are open and I had to go eat. Just sitting down in a restaurant felt like an alien act.

Josh: I’ve been thinking about how I can connect more with fans. I’ve launched ‘Guitarzan’s Flat V Lounge’ on YouTube. It’s a three-tiered platform where people can support me. The first tier, “Beginner Rulers” is only $2 a month, where you get access to members-only live streams, badges and emoji’s and chat. The “Intermediate Rulers” you get all the same perks, plus exclusive member videos, and more custom stuff. The final tier, the “Fucking Rulers,” they get all those same things (as first two tiers), but they also get access to a discord server that I created, a modern-day forum, like Reddit. Basically it’s like access to me. They can ask me questions, they can converse with themselves, they can post pictures of their gear, gig videos, share Spotify playlists. It’s great, we’re already building this community. People are asking me great questions, sharing music, sharing pictures of gear and talking. I have other plans beyond that for higher tiers, that will involve more things.

It’s off to a good start. And my plan, the rest of this year, besides the stuff that I have production-wise to finish, is to mostly put all my effort into that, making content and building that up. 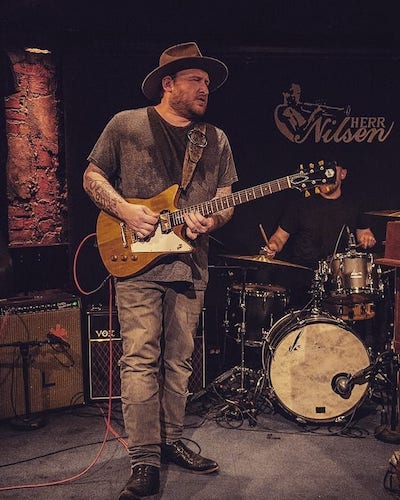 Martine: You have some great stuff going on.

Josh: That’s all we can do in the world we’re living in right now, pivot and try to find new things to keep us busy and fulfill creatively, which is difficult. Because at the heart of who I am is an improviser. I want to be out there on the stage, playing live, and that’s been taken away. It’s hard. That’s the thing that literally makes me the most happy. It’s hard to fill that void. You got to find as many little things as you can.

Martine: Are those helping to fill the void?

Josh: They’re helping. But it’s not the same, you know? And it’s not something you can even explain to people who don’t do it. I’m 40 years old, but I’ve already been living that life for 26, 27 years of multiple gigs every week. Having that outlet is a huge part of what makes me “me” and that’s been stripped away. I’m still playing music, I’m still getting paid to do things involved with music and guitar. That’s all great and fine but the largest part of what makes me identify as “me” has been taken. That’s tough. The big question is, when it comes back, because it will to some degree, we’ll be coming back something totally new, and who knows what the heck it’ll be?

Martine: I don’t have an answer.

Josh: I don’t think anybody does. First off, you have venues closing already, and then you’re going to have limited capacity, and you’re going to have every band in the entire world competing for the limited amount of gigs that will be available for the next year to 18 months. So where does that leave the small potatoes? I don’t know. Maybe that means we have to be doing more of these things like what I’m doing now.

Martine: It’s been great talking with you. Thanks for making the time.

Josh: Thank you. Good to talk to you again.

For more information on Josh Smith