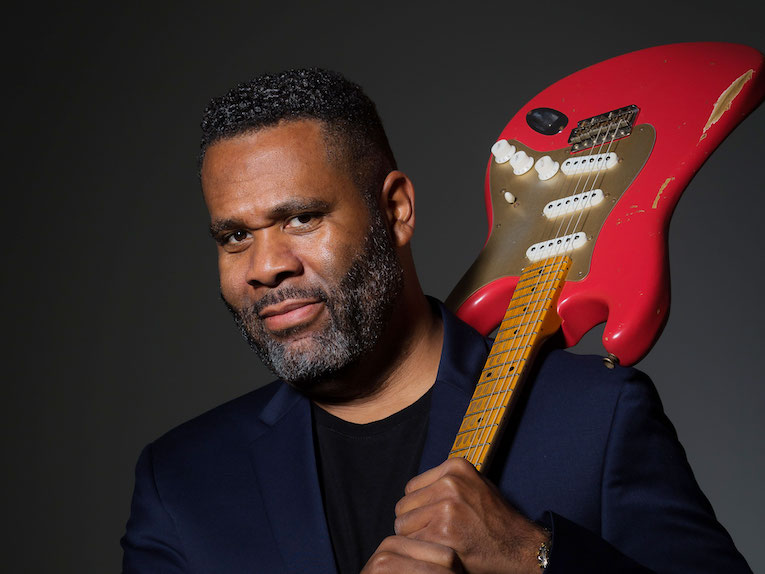 Former lead guitarist for the Fabulous Thunderbirds, Kirk Fletcher is widely considered one of the best blues guitarists in the world. A five-time Blues Music Award and British Blues Award nominee, Fletcher released his sixth solo album, My Blues Pathway, on September 25th, 2020 via Cleopatra Records. The album is a mix of blues originals and covers and two co-writes with Richard Cousins, Robert Cray’s bass player. His last album, Hold On, was released to critical acclaim.

Fletcher has played and recorded with a variety of popular artists, including Joe Bonamassa, The Mannish Boys, Charlie Musselwhite, Cyndi Lauper, Robben Ford and more. By combining Blues, Soul, Funk, Gospel and Blues Rock, he embodies the Rhythm & Blues of the new generation.

Martine Ehrenclou: Tell me about your life-long love of the Blues and how that began.

Kirk Fletcher: I feel my love started in my father’s church when I was very young. Southern Pentecostal church is so similar to Blues to me. Be it the spiritual hymns sang at the beginning of church service or quartet gospel groups. To me it has a lot in common with B.B. King or Howlin’ Wolf or Muddy Waters. For me it was all a natural progression. And I look at Blues and soulful things as one in the same.

Martine: Your album, My Blues Pathway is outstanding. “No Place To Go” is a great song. Tell me about it and how you wrote it with Richard Cousins.

Kirk: Thank you. I had the basic idea of the song and Richard is so versed in supporting the song and soul music, it was so easy and comfortable to write with him. We just kinda went back and forward with lines. Richard came up with some real cool lines.

Martine: On “Rather Fight Than Switch” your vocals are so strong. Were you really feeling it on this track? Does the song have special meaning for you? Does A.C. Reed?

Kirk: Thank you so much. I had been doing that song live a little bit so it was pretty natural to record it with my buddy Dave Kida on drums. I have loved that track for many years. I believe my Austin Texas buddy and former band mate Jay Moeller first hipped me to that song. A.C. Reed had some really cool songs and he was a killer saxophone player with the likes of Albert Collins and Earl Hooker I believe. Sometimes I have felt those lyrics personally in my life. Kids my own age at the time were into Rap music and hip hop and I had already seen my first Blues Festival at 13 years old, so I was pretty hooked on the Blues already.

Martine: Tell me about your Blues heroes. Who influenced you the most?

Kirk: I would say early on it was people like B.B. King and Albert Collins and a little later Stevie Ray Vaughan, Robert Cray. There was a Blues radio show on the weekends called “Ain’t Nothing But The Blues” on KLON 88.1 with Bernie Pearl and I was pretty lucky because he played all kinds of great Blues artists. So, pretty early I heard some great blues.

Martine: Tell me about “Ain’t No Cure For The Downhearted” on the album. Did you rehearse those phenomenal guitar solos or did you simply come up with them while recording?

Kirk: Thank you! This song has a few different subjects going on. I wanted to try to write a song that could mean different things to different people. I somewhat address loneliness we all sometimes feel. Middle aged people finally getting to that age where they question themselves and their decisions they made regarding many things in his or her life. And also simply dreaming, I know I had many hopes and dreams as a young man. Some accomplished and some I’m still in the process. As far as guitar solos I always come up with them on the spot–this is the fun part.

Martine: How did you decide to put the horn section on certain songs? 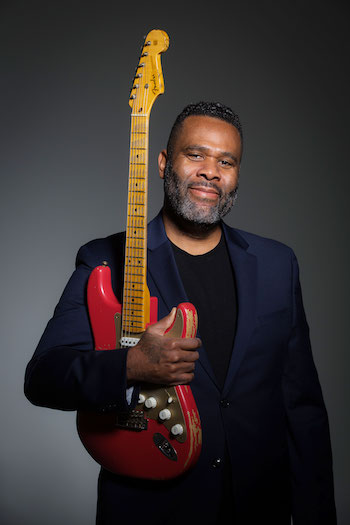 Kirk: I really wanted to have horns on this record. I had the great Joe Sublett and Mark Pender on Sax and trumpet and I was so happy with the contributions. It was so natural which songs were horn songs to me. Most of my favorite Blues guitar players had horns so I wanted them too. Ha!

Martine: How did you choose the Blues covers?

Kirk: Most of my decisions came down to lyrical content of the song. There is sort of a thread that runs through this album. Or I just hadn’t got around to covering a song I loved very much like “Fattening Frogs for Snakes” by Sonny Boy Williamson.

Martine: “Fattening Frogs for Snakes” is a great interpretation of the tune. Please tell me how you came up with that. You played guitar instead of his harp. How did you decide to do that and what was your thinking?

Kirk: Basically that’s a Taj Mahal groove. Sort of like “Gonna Move Up The Country.” I wanted to do something like that. I just had fun with it.

Martine: How’s it been for you during COVID-19?

Kirk: It’s been very depressing at times, but I feel I have also grown in some ways.

Martine: Are you able to perform in Switzerland? What’s next for you?

Kirk: I have few shows here in Europe and I will continue to do my YouTube videos talking about the things I love. And gradually start to write some more music.

Martine: You used a Strat on My Blues Pathway. Tell me about that decision and how you came up with so many different tones and sounds on a Strat.

Kirk: Well, a Strat has always been home base and I feel very comfortable on it. I started with a Strat and I didn’t have another guitar so I had to get every sound out of it. I forced myself to play only Strat on this record. I like doing things like that.

Martine: What other guitars do you play and why?

Kirk: I proudly play PRS Guitars. The 594 semi hollow, DGT, Silver Sky and a Custom 24. I just love how solid and sweet sounding they are. And the company treats me very well.

Martine: Thank you for making the time for this interview.

For more information on My Blues Pathway by Kirk Fletcher: