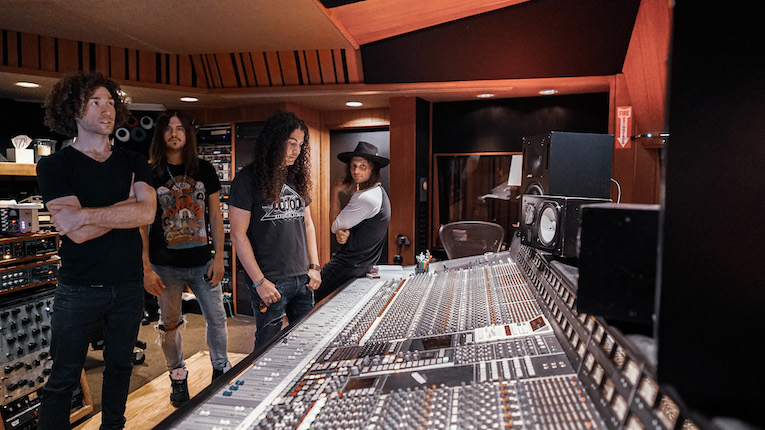 With tickets and seat assignments in hand, Dirty Honey – Marc LaBelle/vocals, John Notto/guitars, Justin Smolian/bass, and Corey Coverstone/ drums – was set to fly to Australia last March to begin recording a second batch of new tunes when they got word that all flights to Australia had been canceled due to COVID. Plans were to again meet up with Nick DiDia – who produced their self-titled debut EP that included the history-making #1 single “When I’m Gone” – at his studio in Byron Bay. Now, six months later, with a travel ban between the U.S. and Australia still in place, Dirty Honey has just gone into a Los Angeles recording studio with DiDia producing via ZOOM.

“Back in March, we had a handful of songs that were in various states of completion,” said the band’s vocalist Marc LaBelle, “but now, not being able to tour, we’ve had the time to finish them, feel really confident about them, and write more. We’re going into the studio with twice as many new songs as we had back in March. The pre-production for this new music has been handled exactly the same way as it was for the EP; Nick was in Australia, we were here in Los Angeles, and we were sending demos back and forth. Recording the music remotely is what’s different this time. But Nick brought in Brendan O’Brien’s engineer, Tom Syrowski (AC/DC, Chris Cornell), who’s been in the room with some incredible artists, so it’s going to be great.”

Added Dirty Honey’s guitarist John Notto, “We really know these new songs, because we played most of them live, every night when we were on tour – that’s where we did a lot of the pre-production, in front of the fans. Getting feedback from fans at the merch table after the shows, and watching the YouTube videos they shot and posted all helped us finalize the new songs. And the songs that we’ve written since our tour ended, we’ve been playing the crap out of them in rehearsal. We’ve got a few tracks where we stretched a little more, but all in all, I think fans can expect a shot in the arm, kick-ass rock’n’roll.”

“The adventure factor of the past two years definitely played a role in the new songs,” said LaBelle. “I look back over that time, and it’s been an incredible ride…All of the support we’ve had, being played on our hometown radio station, something I never really thought would happen, it’s just crazy.”

About Dirty Honey
To say that 2019 was a breakout year for Dirty Honey would be an understatement. Recorded in Byron Bay, Australia with producer Nick DiDia (Pearl Jam, Rage Against The Machine), the band released its self-titled debut EP in March 2019. Over the course of the last year-and-a-half, Dirty Honey opened for The Who, Guns N’ Roses, and Slash ft. Myles Kennedy & The Conspirators, performed at more than a dozen major summer festivals including Welcome to Rockville, Louder Than Life, Heavy MTL, Rocklahoma, Sonic Temple and Epicenter, and played to SRO crowds at every show on its first-ever headline tour in December and January and February this year.

Dirty Honey also made music history when it became the only unsigned artist ever to hit #1 on Billboard’s Mainstream Rock Chart with its debut track “When I’m Gone.” Additionally, the band was named Canadian Rock Radio’s #1 International Breakout Artist of 2019, the UK’s Louder/Classic Rock magazine hailed Dirty Honey as one of the “20 great bands to shake up the 2020s,” and the band was nominated as Best New Rock/Alternative Artist for the 2020 iHeartRadio Music Awards. “Rolling 7s,” Dirty Honey’s second single, went all the way to #4 at Rock Radio, and the music video has racked up more than 4.5-million YouTube plays. The band is currently recording its follow-up release which is expected out early next year.

Listen to “When I’m Gone”