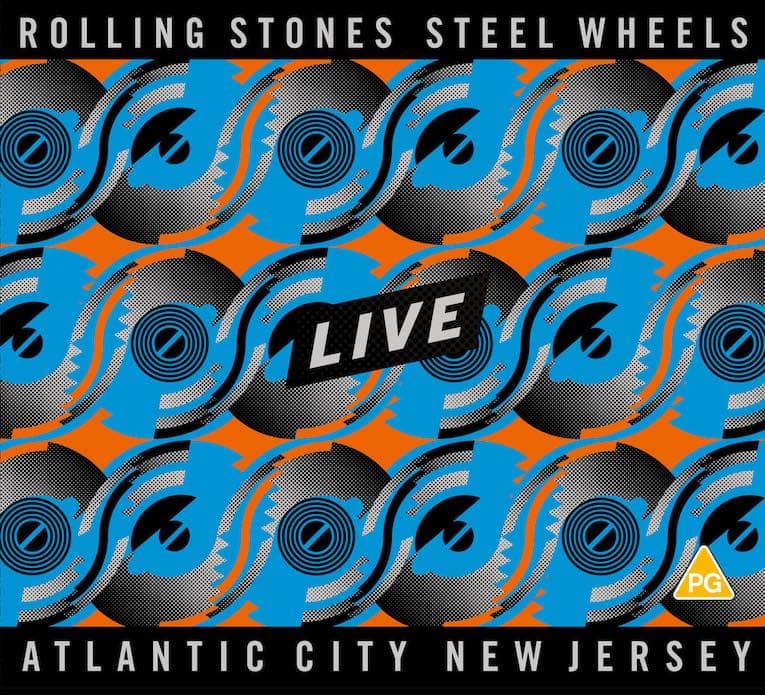 The Rolling Stones add another title to the band’s eternal-amazing body of work with a new and previously unreleased concert film and soundtrack, Steel Wheels Live, that dropped September 25th, 2020 thanks to Eagle Rock Entertainment. The set is available in multiple formats (limited 180gm 4LP colored vinyl, DVD + 2CD, SD Blu-ray + 2CD and digital formats) and will also be released as a special limited 6-disc version, which includes the Atlantic City performance on DVD, SD-Blu-ray, two CDs, a DVD of their Steel Wheels tour performance at the famed Tokyo Dome, as well as Steel Wheels Rare Reels, a CD featuring tracks which didn’t feature on the core tour setlist. All of this documents a show from the Stones’ Steel Wheels tour that went down in December of 1989 at the Atlantic City Convention Center. It was a blisteringly hot performance made even hotter by guest spots from Axl Rose, Izzy Stradlin, Eric Clapton, and John Lee Hooker.

The Steel Wheels tour was the Rolling Stones’ first jaunt through the USA since 1981 and featured one of Mick, Keith, and the boys’ longest and most ambitious set lists ever. It was two and a half hours deep and filled with legendary Stones’ classics as well as several new tracks from the then-current Steel Wheels record. It was a strong statement of history and the future that honored the group’s vast catalogue while also showcasing where they were going creatively at the time and the broad range of music they’ve explored over their career. It was and is still a living testament to the Stones’ legacy of unbeatable live shows and to the power and glory of rock and roll, itself.

From the first chords of the opening song “Start Me Up,” the band is clearly firing on all eight cylinders and wastes no time whipping the assembled crowd into a frenzy. Everyone on stage is amped up and grooving hard, just the way the world likes them. Keith’s Open G guitar riff instantly sets the fans in motion and Mick is just Mick, holding the thousands of people there in the palm of his hand as only he can. An aggressive version of “Bitch” follows and raises the energy in the room even higher. This is the Stones that everyone came to witness and they do not disappoint.

“Sad Sad Sad” was new at the time but stands tall next to the many eternally great songs in the show. It’s upbeat, muscular, and as tight as one of Charlie Watts’ drumheads. Axl Rose and Izzy Stradlin join the Stones for the very first live performance of “Salt Of The Earth” from their 1968 Beggars Banquet record and help the band make a little history. Axl sounds right at home standing next to Mick and adds his own distinct flavor to the proceedings. Eric Clapton comes out to help rock “Little Red Rooster” with a down-and-dirty vibe and stays up to jam with John Lee Hooker on Hooker’s signature song “Boogie Chillen.” All of these musical heroes combine to put down a mighty take on Hooker’s hypnotic old-school style that demands to be heard.

The Rolling Stones also use this show to run through many of the staples of their songbook like “Honky Tonk Women,” “You Can’t Always Get What You Want,” “Gimme Shelter,” “Brown Sugar,” “Satisfaction,” and “Jumpin” Jack Flash” much to the delight of the audience. These songs have become intertwined with the lives of the band’s fans over the years and a Stones’ gig without them would be unthinkable. The band gives each one everything they’ve got and the crowd responds in kind.

In total, Steel Wheels Live is an awesome live recording of a mature Rolling Stones at the peak of their powers. The Stones are the last band standing from the original classic rock period even to the present day and this set demonstrates a whole lot of the reasons why. You’re almost certainly a fan already so crank this show up and absorb the majesty of it all.