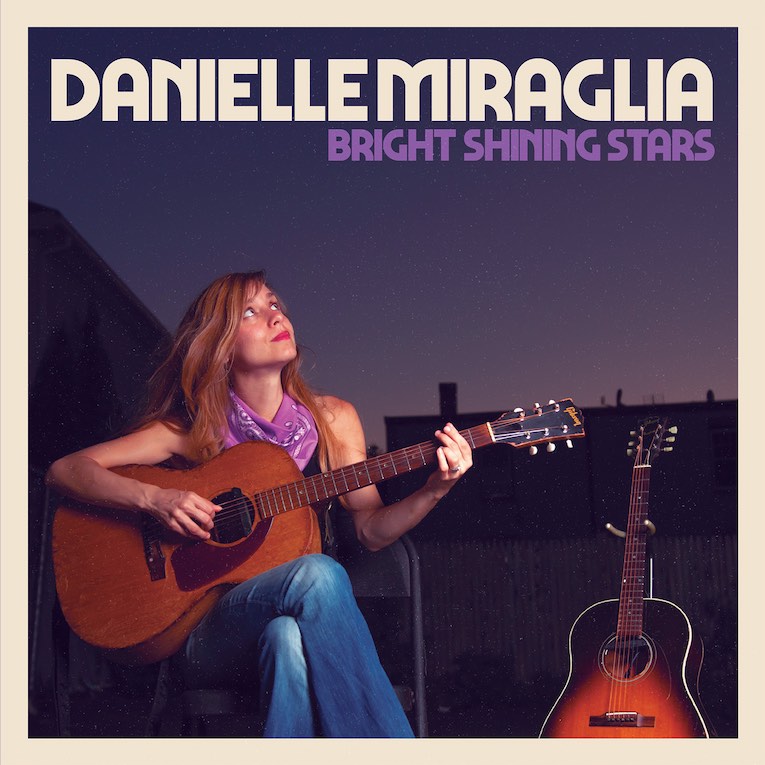 Miraglia is often seen in the company of her band The Glory Junkies but she’s an engaging solo performer as well with an expressive vocal range and a knack for thumb-driven, thumping acoustic guitar grooves laid down on her vintage Gibson flattop. She’s also a fine storyteller and lyrical interpreter who gets inside the songs she sings and pulls out their truth. These qualities make Bright Shining Stars a compelling experience from beginning to end and show listeners the quiet cool she carried into these sessions. Solo acoustic albums boil down to songs and personality, two areas where Danielle is abundantly blessed. It’s easy to understand why she has quickly attracted attention both regionally and nationally and has built a steadily-growing fan base.

Bright Shining Stars gets underway with a delicate, fingerpicked instrumental called “Sounds Like Home” that runs just over a minute in length and serves as a brief preface to the album. It’s soft and hypnotic but still beats out a strong pulse that lets you know life is happening in this moment. The next track is an even more gentle country blues take on Ma Rainey’s immortal “CC Rider” that gives Miraglia the chance to crawl inside your ears and stay there. Her version is all soul and feel, choosing to be a confessional whisper rather than a tormented scream, and it’s a thing of beauty.

Miraglia shows herself to be a gutsy song stylist by covering not one but two selections from Bob Dylan’s Blood On The Tracks, which is arguably his career best. The first, “You’re Gonna Make Me Lonesome When You Go,” gets an easy and soulful acoustic backbeat treatment that suits the song extremely well and allows Danielle to put her own stamp of meaning on Dylan’s words. Peter Parcek contributes some gourmet guitar licks to it and Miraglia inhabits the track like she wrote it. The second cut, “Meet Me In The Morning,” is already a strong folk/blues song in its original form but Miraglia makes it harder and more Southern with brilliant help from Richard Rosenblatt on harp. It’s a bold move, doubling down on these Dylan covers, but Miraglia and her team shine on both.

Janis Joplin’s “Turtle Blues” gets a slow, spacious arrangement that contains one of Miraglia’s best vocal performances on the album. It’s a song about a mean, mistreating woman sung by the woman, herself, and Danielle extracts everything Joplin’s lyrics have to give. The set ends with the title track, “Bright Shining Stars,” a Miraglia original with a positive and encouraging spirit that features nothing but Danielle’s voice and loping, alternating bass fingerstyle guitar accompaniment. It’s a softly uplifting song that finishes the record with resolution and grace. Bright Shining Stars is filled with this kind of soft-spoken power. It’s an excellent set that lets the world know that Danielle Miraglia is a performer of considerable talents, even in this quiet context. Cue it up and let the magic flow.