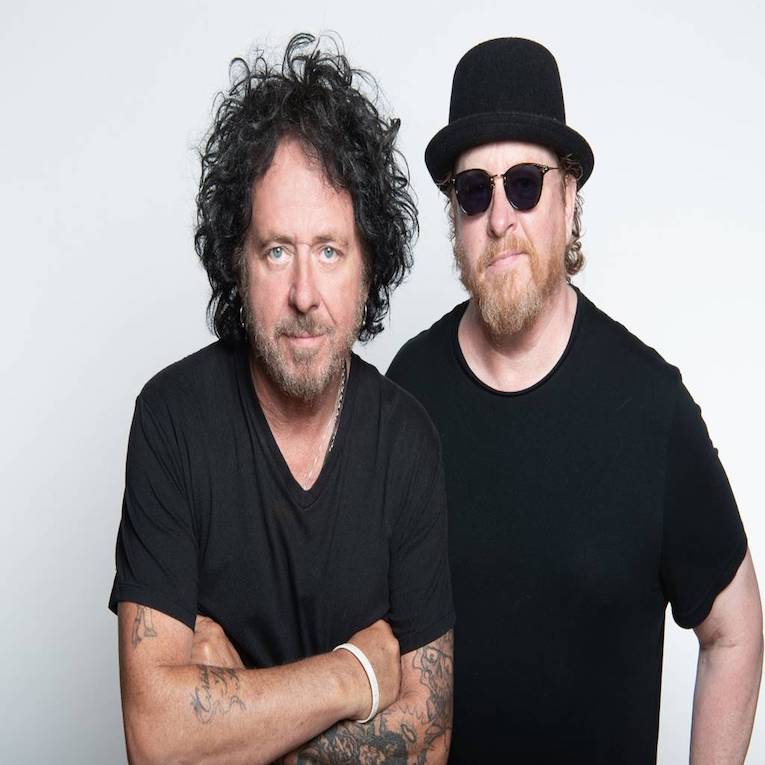 Los Angeles, CA — Steve Lukather a.k.a. Luke and Joseph Williams are life-long friends since they were kids, and bandmates sharing a deep colorful history that has thrived professionally on a global basis over the past decades. Today, the duo has announced the formation of a new band, with world class players. They will continue to tour as Toto, and are in motion to bring their Dogz of Oz tour worldwide as the pair looks forward. Planned concerts across North America, Europe, Asia, Australia / New Zealand and other geographical destinations will be staged where the ensemble will perform all the hits, deep cuts, and solo music from Lukather and Williams individual catalogs.

Joining Lukather and Williams for this next chapter in their indelible history are bassist John Pierce (Huey Lewis and The News), drummer Robert “Sput” Searight (Ghost-Note / Snarky Puppy), and keyboardist / background vocalist Steve Maggiora (Elvis, Moms Mabely). Keyboardist Dominique “Xavier” Taplin (Prince, Ghost-Note) and multi-instrumentalist / vocalist Warren Ham (Ringo Starr) have segued over continuing their tenure in the ensemble alongside Lukather and Williams. This marks the fifteenth incarnation of the Toto line-up in consideration of band members or sidemen who joined or exited.

Luke shares, “We could not be more at peace with this move. There is a refreshing, optimistic enthusiasm to step into the future. At this moment, Joe and I are the only long-tenured members of the band that want to be on the road continuing to bring music to our multi-generational fan base. I’ve spent almost four and a half decades of my life as the only original member who never missed a show or an album nurturing this legacy while enabling the music to continually exist in the live concert setting. That is something I’ll never stop doing, and the Dogz of Oz global tour offers a rare opportunity to reimagine our personal futures while simultaneously preserving the deep connection that exists with the audience while likewise yielding continual discovery. The hope is to move forward with the planned itinerary for Summer, 2021 that will bring us back to our fans across The World.”

Williams offers, “Luke and I have been through a lot with one another. He’s like a brother to me. Our creative partnership has always enriched our lives. As we look towards what’s to come in unison, there is nothing but anticipation to bring everything in our minds to life. I can’t think of anyone else on Earth I’d rather launch the next chapter with this lifelong, loyal and gifted friend and band mate. We’re the last men standing…The Dogz of Oz!” Luke adds, “Joe and I have been friends since I was 17, and Joe was 14. During the course of this pandemic we’ve been reevaluating our career and how to move forward. People are either not with us anymore or have retired. We still feel like kids who want to be back on the road as soon as possible. It’s where we live. Joe’s growth as a producer, songwriter, engineer, singer and performer is inspiring. The timing of this move is perfect as Joe is at the top of his game, and he amazes me every day. We are enjoying this collaboration, and could not be more enthusiastic about the future.”

On Saturday, November 21 the new line-up will make their global debut. The band has planned a one-night only concert event that will broadcast prime time in three geographical regions to super-serve the fans: Asia, Australia / New Zealand; Europe; North America. For more information, tickets, and available bundles click here . Direct links on a territory by territory basis are: UK/Europe/ AUS/ASIA/ US .

In 2021, both Steve Lukather and Joseph Williams will release solo albums that feature one another performing on some of the songs featured. The forthcoming titles will be issued globally in partnership with Mascot Label Group. Last month, Luke released “Run To Me” from the upcoming album featuring Williams alongside Ringo Starr and future band mate John Pierce .

ABOUT STEVE LUKATHER
Over the course of five decades Steve Lukather has placed an indelible stamp on pop culture. Alongside his tenure as the only member of Toto to never take a hiatus from the band, he has performed on thousands of albums as a session musician. Amongst these musical contributions are some of the most successful, influential and enduring records of all-time including Michael Jackson’s Thriller. Additionally, he released a memoir titled The Gospel According To Luke which was a global best-seller. He continues to be Toto’s band leader, a member of Ringo’s All-Starr Band, and a solo artist performing with multiple ensembles which include Nerve Bundle and Toxic Monkey.

Toto has enjoyed a celebrated resurgence over the last several years tied to the band’s 40th Anniversary, wherein over a thirty-month period they performed for millions of fans across North America, Europe, Japan, Australia, New Zealand and Indonesia. The band’s repertoire has been streamed over a billion times, while album sales exceed 40 million copies. Simply, Toto is one of the few 70’s bands that have endured the changing trends and styles, and 45 years into a career enjoy a multi-generational fan base.

For a complete discography, and more information click here

ABOUT JOSEPH WILLIAMS
At age fifteen, Williams began his career as a radio and television commercial singer. Joseph also achieved success as a television and film composer in the late 90’s and early 2000’s. He fronted Toto as a lead vocalist from 1986 to 1988, and was featured on the albums Fahrenheit (1986) and The Seventh One (1988). He also appeared on the 2006 release Falling in Between, sharing lead vocals with Luke on “Bottom of Your Soul.” In 2010 he returned to the band, becoming front man and lead vocalist, a tenure that continues through today. He has released ten solo albums, and is an Emmy Award nominated film composer. His career as a session vocalist has placed his voice indelibly in pop culture through the dozens of performances in the medium of film, amongst which is his role as the adult Simba on The Lion King. Williams voice is featured on “Hakuna Matata” alongside “Can You Feel The Love Tonight.” He is the son of film composer John Williams and actress Barbera Ruick. For broader detail on his credits click here and here