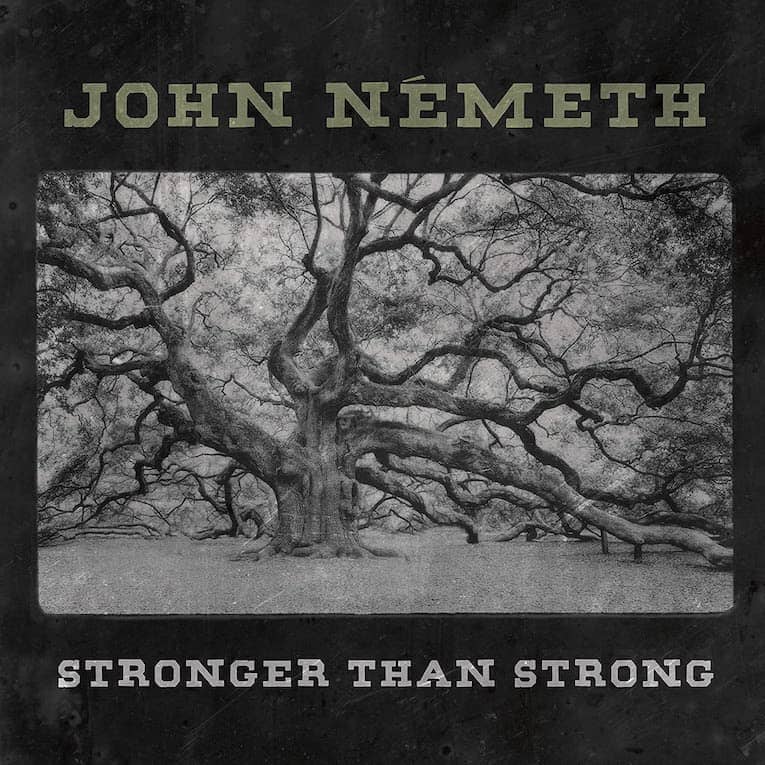 Hardworking blues dynamo John Németh leads his band through a dirtied-up, retro session on his new album Stronger Than Strong. Released October 16th, 2020 on Nola Blue Records, it’s a rough-hewn live-in-the-studio effort that vibes like the group is coming straight off of the floorboards in an edge-of-town roadhouse that’s packed to the rafters. Németh is a prodigiously talented singer and harmonica player who has used his skills to build a large, international following over the last couple of decades. His soulful tenor voice and fierce harp work are present in full force on Stronger Than Strong and the two-time Blues Music Award (BMA) winner and multi-BMA nominee has never sounded better or more urgent.

Producer Scott Bomar, who leads the Memphis Soul band The Bo-Keys and is the owner and operator of Electraphonic Recording Studios, was at the board for the project and did an exemplary job of capturing everything Németh had to give. John is backed up on these tracks by his seasoned road band of young-gun players, The Blue Dreamers, that features 19-year-old guitar monster Jon Hay, drummer Danny Banks, and bassist Matt Wilson. Together, the four musicians are a formidable unit capable of rocking any house in the universe. They grab hold of every bit of the 12 songs presented here and do everything possible to them but let go. All involved display a profound aptitude for blues and roots music and will impress even the most hardcore fans on the scene.

Stronger Than Strong gets underway with the hypnotic Mississippi Hill Country-style opener “Come And Take It.” Hay’s fuzz-laden guitar licks perfectly support Németh’s gritty harp tones and strident vocals and the whole band grooves as one. The sound of these four playing live in a room like the old days is completely addictive and cuts to the heart of the blues experience. You can practically hear the brown liquor flowing across the bar. “Fountain Of A Man” keeps the Hill Country/Fat Possum feel going in a more energetic way and shines a light on drummer Danny Banks. His train beat on the snare drum pushes the track into overdrive while never sacrificing the almost-out-of-control edginess this kind of cut requires. The frantic, past-midnight lunacy of this one’s pocket is destined to keep dancefloors filled with happy blues lovers and Németh rages over its top like a man possessed.

“Throw Me In The Water” finds John Nemeth and the band rocking a bare-knuckle boogie that drives straight ahead. It’s a great rock and roll moment that shows their fearless ability to get loud and blow minds. Jon Hay’s lead guitar here is biting and confident and urges Németh on to new heights of his own. “Chain Breaker Blues” is a killer Chicago shuffle in the Howlin’ Wolf mode and features one of Németh’s strongest vocal takes on the album. Hay again rips it up on lead guitar and turns in a performance that could stand tall next to anyone in the business.

“Bars” is a sublime piece of mellow soul that lets Németh use his wit and humor to bring listeners some well-intended social commentary. He speaks directly to the problems so many people are living through right now with empathy and grace. The track is also a good downshift from the high-octane material that precedes it. The classic R&B/swinging doo-wop-inspired ‘She’s My Punisher” is another impressive genre shift indicative of the depth of Németh’s vision, as is the playful, upbeat closing song “Sweep The Shack.” Németh fans will be pumped to know that Stronger Than Strong more than lives up to its ultra-confident title and brings them the ecstatic sound of a small combo making a big noise. John Németh is a modern master of American music and this is his mightiest record yet. Highly recommended.

Order link for Stronger Than Strong