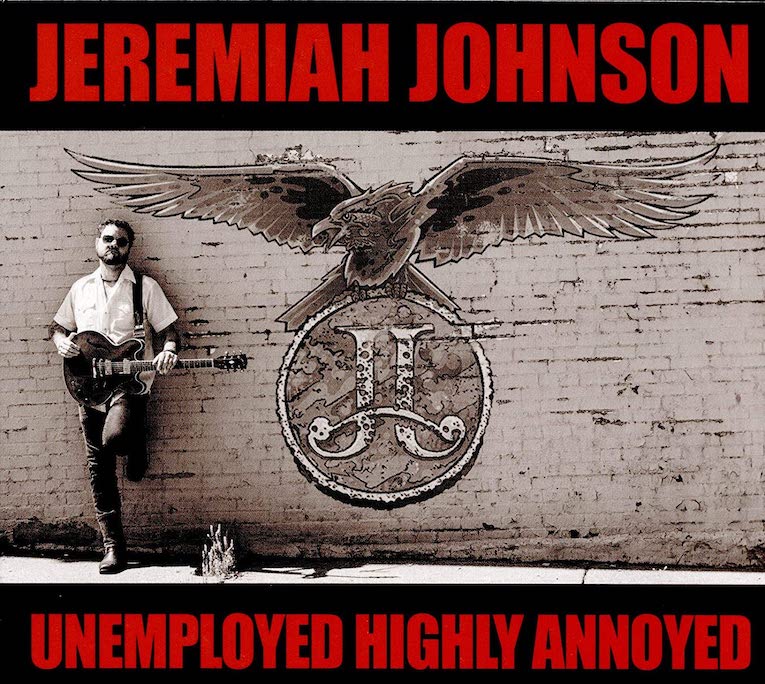 Talented singer-songwriter and guitarist Jeremiah Johnson returns with Unemployed Highly Annoyed, out this October 30th on Ruf Records, his second album of this year and a personal response to the unprecedented coronavirus pandemic. One of the hottest prospects on the blues scene over the last decade, Mississippi native Johnson knows a thing or two about hard work. By all  accounts, Johnson has come up the hard way, day-jobbing as a billboard labourer while recording and self-releasing some fine blues records. That hard work paid off when 2015s Grind hit big on the Billboard Blues Chart, and since then Johnson has gone from strength to strength. With this year’s earlier release, Heavens To Betsy riding high and a full European tour scheduled to back it up, 2020 was set to be a stellar year for Johnson. That is, until Covid-19 hit the brakes.

Johnson’s response has been to get creative. This is a true ‘lock-down recording,’ with a what-you-see-is-what-you-get aesthetic and a group of just three musicians comprising of, Johnson, (Devon Allman Project alumni) Tony Antonelli on percussion, and multi-instrumentalist Paul Niehaus IV (head of the Blue Lotus Recordings label) on bass and keys. Niehaus also handled production, recording and engineering, of which Johnson states: “We weren’t worried about the “perfect” notes and achieving that “polished” sound. We love the passion and energy of the songs, so we kept it as live as possible,”

For a three-piece, the band certainly kicks up a storm. “Burn Down The Garden” races out of the tracks with a good dose of high-energy rock before smoothing out into an upbeat ballad, with plenty of kick, some nice breaks and sparkling guitar. “Seems like the whole world’s breaking down,” sings Johnson, “I have a little faith things will come around.” Johnson’s writing and arranging is uniformly strong throughout this set. He knows when to change gears, when to stoke the fire and when to let it glide, providing plenty of variety to keep a listener interested.

The title-track smoulders wonderfully, a swaggering, sweaty rocker with energy and joyous ferocity, which brings to mind Elvis Presley’s rejuvenating sessions at Stax. These really are top-class musicians, a power-trio who manage to generate more lightning than bands twice their size. “Have a little faith, in the human race.” Johnson’s voice, often overshadowed by his passionate guitar, is worthy of singling out. It cuts through the storm very effectively; strong and on-point. That said, some of the best moments on this record come from the group’s extended instrumental jams. There’s a delightful level of empathy here; Johnson, Antonelli and Niehaus sound like they’ve been jamming together for decades. They play tight and sound loose, in the best possible sense.

“Love and Sympathy,” possibly the mellowest track, loses none of its potency for being taken at a slower tempo. Johnson never over-sells the pathos and, even in first gear, the band inject enough muscle and tension to keep things rolling nicely. “You miss your family, I miss mine too.” It’s a sentiment many of us will recognize. Johnson delivers the message with honesty and sincerity. The album ends on an upbeat with “Rock ‘n Roll for the Soul,” an all-out blast of shameless rockabilly and a paean to the mid-fifties revolution. Full of Chuck Berry riffs and Little Richard energy, it’s a great way to close the show.

Everything that it does, Unemployed Highly Annoyed by Jeremiah Johnson does well. Rock fans in need of solace, escapism, fun or an adrenalin-shot to the system will find it all here. Johnson has used his lock-down time well.