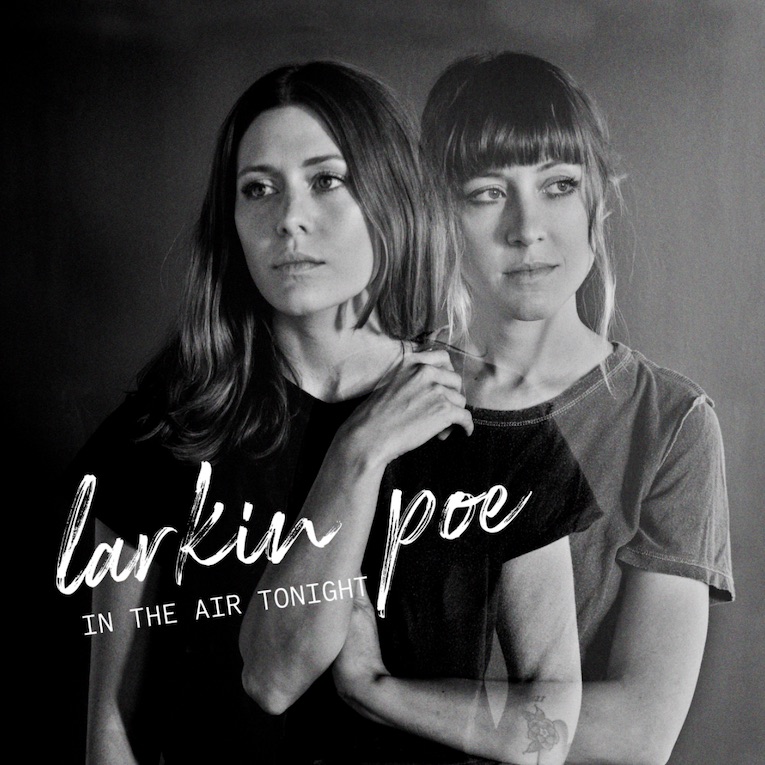 Today, Larkin Poe share their take on the Phil Collins classic “In The Air Tonight.” The mysterious companion video for the song heralds the arrival of KINDRED SPIRITS, Larkin Poe’s first-ever covers album and second full-length of 2020, arriving November 20 via their own Tricki-Woo Records. The album was self-produced by Larkin Poe from their home studio. PARADE Magazine premiered the new video, and praised their take on the classic song calling it “intense and unique.”

“We feel like every human on earth has probably sung or hummed or air drummed ‘In The Air Tonight’ at least once in their lives,” says Larkin Poe. “There’s a strange, hallow’s eve energy lurking beneath the lyric of this song that has captured countless imaginations, ours included. We wanted to delve deeper into this more sinister vibe by stripping the song back further with only lap steel, vocals, stomps, and claps.”

Watch “In The Air Tonight”

“When we decided to release this cover today, we were excited because it meant a spooky, moody music video would be a perfect fit,” Larkin Poe adds, “we love the darker undertones of the recording and — with the help of some vibey found footage — created the perfect Halloween flavored video.” The new song and video are delivered in the most timely fashion for these relatives of Edgar Allan Poe.

In the spirit of Halloween, Megan and Rebecca are going to share a Facebook video at 1pm CT this Saturday, October 31 in which they’ll perform the theme songs of their costumes — Megan will be a character from Star Trek and Rebecca will be WWE’s The Undertaker.

Larkin Poe announced KINDRED SPIRITS last month with their cover of The Moody Blues’ “Nights in White Satin,” which was followed by their version of Lenny Kravitz’s “Fly Away” that Rolling Stone Country called “a greasy blues jam.”

In any normal year, the band would have released an acclaimed new album and then hit the road for a very long time. But of course, 2020 has been no ordinary year. The GRAMMY® Award-nominated sister duo of Rebecca and Megan Lovell kicked things off in June with their fifth studio album, SELF MADE MAN, topping an array of Billboard charts while earning unanimous acclaim around the world. Instead of a summer of tour buses and packed theaters, the Atlanta-bred, Nashville-based Lovells found themselves at home, performing many livestream concerts and adding to their much-loved YouTube covers series. That got them thinking, and led to the idea for the creation of KINDRED SPIRITS, a collection of stripped-back versions of covers, both classic and new, including songs by the Allman Brothers Band, Robert Johnson, Elton John, Post Malone, Ozzy Osbourne, and more.

In keeping with the surreality of this very strange year, in a recent interview with The New York Times, Bruce Springsteen spoke of a few artists that have been exciting him recently: “J.S. Ondara, Mondo Cozmo, H.E.R., Orville Peck, Larkin Poe and Bon Iver, to name a few. Having the time to listen is, at least, one upside of being stuck in place. “I’ve been really enjoying sort of being deeply back into music,” Springsteen said, “almost like I was when I was a kid. I was always in the record store, looking for the next thing.”

So while 2020 was supposed to be a year of hitting the road and taking their new songs to fans around the globe, instead it’s become a year of reflection, of looking inward, of looking back. But Larkin Poe being Larkin Poe, looking in and looking back for them is also looking forward as they continue to put their own signature on the traditions they embrace. Not ones to sit around and wait for something to happen, Rebecca and Megan are constantly churning and creating. No one knows what this next year holds, but rest assured Larkin Poe will find ways to keep it fun and interesting for everyone, as we are all kindred spirits.

“We’re grateful for the experience of making this album and grateful to the kindred spirits who have come before us and written the soundtrack of our lives.”