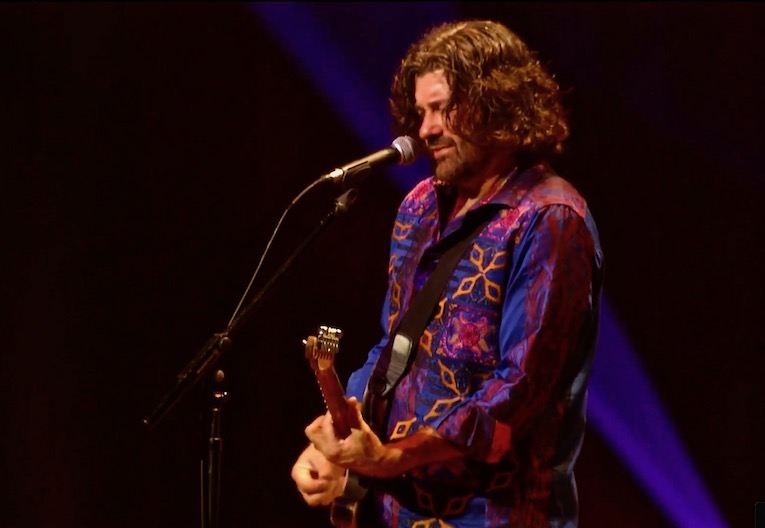 Tab Benoit and Samantha Fish performed a nearly three-hour set at the iconic Ryman Auditorium, Nashville, TN on Friday November 6th, 2020 to a socially distanced in-person audience, and also streamed live. This review is based on the virtual livestream performance.

The concert opened with the camera panning the audience cloaked in darkness, all socially distanced, and according to The Ryman’s rules, seated six feet apart with required face masks. Blues/roots-rock artist and multiple award winner, Samantha Fish appeared on stage, dressed in a sparkling white/florescent jacket with fins for shoulder pads and black leather pants, holding her white Gibson SG.

Summoning the crowd, Fish said, “Come on Nashville, how’re we doing? You ready to have a good time tonight?” A few whoops and hollers came from the audience as she and the band launched into the rocker, “Bitch On The Run” from her Wild Heart album, her vocals and guitar chops in fine form. Digging into the song, bass player Ron Johnson and drummer Doug Belote were tight, the song flush with Fish’s expressive vocals and ripping guitar chops. Straining to hear applause from the audience, I realized then that social distancing had greatly reduced the size of the crowd.

Fish charmed the audience with “It’s such an honor to be here tonight at The Ryman Auditorium, y’all, kicking things off for the wonderful Tab Benoit.” Deep into the groove of her title track from her latest album, Kill Or Be Kind, Fish revealed her spunk and grit. She’s an expressive and animated artist, a passionate singer and guitarist. Watching her live, you can see why men love her and women admire her. She has a magnetic stage presence and is a highly talented singer, songwriter and guitarist. After the song, she said, “ It’s my first time at the Ryman. I’m so excited. It feels like a baptism.” 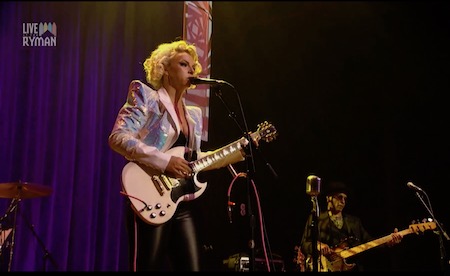 After switching guitars, Fish and her band went full on into “Highway Holding Me Now” from Wild Heart and played some wicked slide on her Delaney guitar. Performing more songs from Kill or Be Kind, a few from Belle of the West, she changed up guitars a couple of times. The multi-faceted Samantha Fish went from gritty rocker to vulnerable singer/songwriter, revealing glimpses into her personality, a birds eye view of her talents. She closed her 47 minute set with “Bulletproof” from Kill or Be Kind on her cigar box guitar, confident and in her element.

With a livestreamed virtual concert, your experience is dependent on the camera from inside the venue. You’re removed from the performance because of the obvious—you’re not there– but also because of the physical distancing of the artists on stage and the audience. On the upside, livestream virtual concerts allow fans from across the globe to see artists and bands perform live in real time.

After Samantha Fish and her band thanked the audience, Louisiana blues guitarist, singer-songwriter Tab Benoit and his drummer Terence Higgins and bassist Corey Duplechin appeared on stage. Benoit is one of the most impressive guitarists to emerge from Southern Louisiana and his guitar tone and style is easily recognized, as is his soulful voice. He wasn’t awarded B.B. King Entertainer of the Year (Blues Music Awards) for nothing, along with several other BMA awards. Benoit is a consummate musician and performer, known for his humor and storytelling.

With long hair, a first for this musician, the camera zoomed in on Benoit and an alligator head on a speaker behind him as he and the band kicked off with, “Why Are People Like That,” a boogie, rock and roll tune from his album, Brother To the Blues. Right from the start, Benoit blasted the roof off The Ryman with his outstanding guitar playing, his smooth, smoky vocals and blues songs drawn from the bayou. Dressed in one of his trademark colorful shirts and jeans, he integrated some fine Chicken Pickin’ licks into the song on his Tele Thinline.

Locking into a deep groove on “A Whole Lotta Soul” from his album, Medicine, Benoit and the band just killed it. Benoit is a muscular player, one heck of a string bender with aggressive vibrato. His guitar solo, one of many that night, was soul-soaked and expertly played. It’s one of the things Tab Benoit is known for. His voice has such ear-pleasing tone and soulfulness. The camera zoomed in on drummer Higgins and his smile said it all. After this song, Benoit greeted the audience and said, “What a great place to play for the first time in eight months.” With a laugh he said, “I got my hair done especially for this event at a place called “Covid Cuts.” Throughout his almost two-hour set, Benoit revealed just how much he had missed performing live.

Slowing things down a bit with “Nothing Takes The Place Of You” from Medicine, I’m sure I wasn’t the only one struck by the beauty of this love song and by Benoit’s soulful take on this tune, his ability to make his guitar whine and moan. He’s a master at what he does and even by livestream, I was moved. He and the band were so into it, fans had to feel it. After the song, he told a few jokes before he performed “Standing On The Bank” a slower, down and dirty blues with groove, and the up-tempo blues boogie, “The Blues Is There To Stay,” an ode to the staying power of the blues. 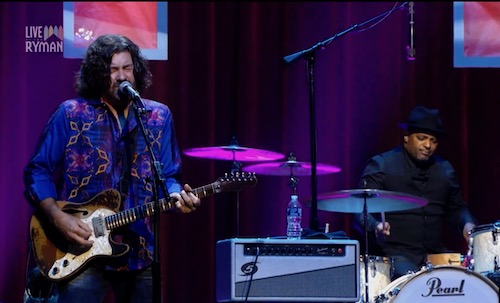 Sweaty Louisiana swampy blues and rock and roll infiltrated the show, along with country/Cajun flavors. Benoit took a moment to thank the audience for coming and the people who tuned in via livestream. He said, “I’m sorry I’m just not a streaming kind of guy.” He added, “We’re just getting started. We’re doing a tour. I can’t let this thing die off—this thing we do together. I can’t stay home and play into a little camera. So we’re doing a tour again, we’re going across the country.”

His announcement was greeted by applause from the audience, spare that it was because of required limited capacity. Benoit continued. “I did not get into music to play for a little camera on my computer. I got into music to play for the people, to feel their energy.” And you sensed right then that playing live for an audience was part of the fabric of his being, much like other professional musicians who have suffered with not being able to tour because of the pandemic.

Benoit and the band launched into “Darkness,” a beautiful and heartbreaking song from his album The Sea Saint Sessions. Benoit must have performed that song thousands of times over the years and this performance was just as soulful as when I saw him live at a club in Southern California. Tab brings it every single time. He was feeling it—even via livestream you could see that–while bassist Duplechin and drummer Higgins locked it down. Benoit has a way of channeling emotion into his playing and singing like no other– part of why he is so beloved. Even with the obvious constraints of watching a virtual concert, it was thrilling to watching him play this tune with so much energy and commitment to the music.

After the song ended, Benoit called Samantha Fish to join him on stage to perform “I Put A Spell On You” from his album, Nice And Warm. Fish, now dressed in a black leather jacket with silver spikes, killed it on guitar, generating a dynamic performance. Together on stage, Benoit and Fish shared nice chemistry, both taking guitar solos, singing verses, immersed in the intensity of the song.

The encore began with Tab saying to the audience, “It’s so good to be in my natural habitat. I’ve never taken eight months off.” And he explained how we’d all been missing something big, something we all shared. His honesty was refreshing. Benoit made a couple more jokes but his gratitude for playing live surfaced in his grin, in his eyes. You could see that because of the camera zooming in so close.

Tab Benoit, his band and Samantha Fish closed the show with Benoit’s “Night Train,” an excellent, fun and charging blues rocker. Benoit let loose a bit and kicked up his heels on stage, immersed in the music, his eyes closed tight with feeling. All of them were having a blast. The song merged into a bit of a jam, and Higgins and Duplechin enjoyed their moment improvising as a unit. All in all it was a great show.