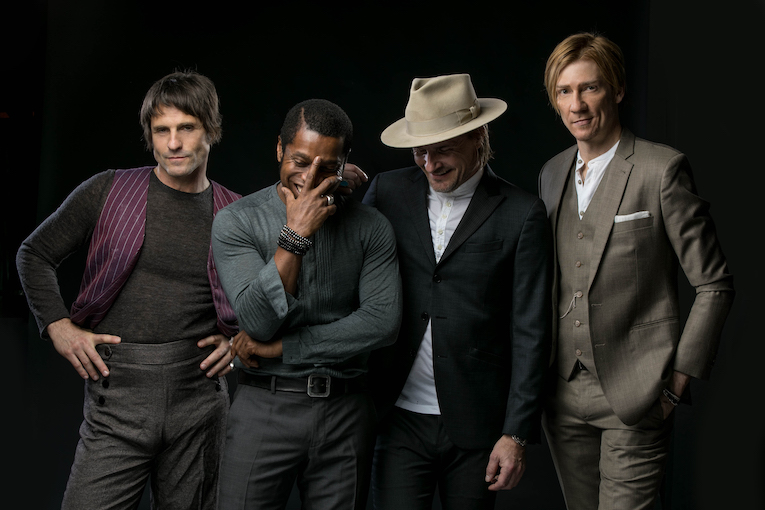 Los Angeles based rock n’ roll/soul band Vintage Trouble release their mighty cover and video of Edwin Starr’s “War”. Right from the opening drum roll, the band fuels this song with the power of a jet engine, led by electrifying vocalist/frontman Ty Taylor.

In a time when the country is more divided than ever, Los Angeles based Vintage Trouble teamed up with producer Matt Salazar and Mad Muse Studios to honor the 50th anniversary of “War” by Edwin Starr, a powerful message that begs the question: “War, what is it good for?” Answer: Absolutely nothing.

Locked tight, the band infuses this anti-war rock anthem with a fresh, modern feel with Taylor at the helm. His voice is a force, soulful and righteous. The quartet, Ty Taylor (vocals), Nalle Colt (guitar), Rick Barrio Dill (bass), and Richard Danielson (drums) is a formidable ensemble, and here they are on fire.

Now you can see the band in action in this video on this tremendous cover of “War” by Edwin Starr. In the recording studio, Vintage Trouble says, “When Covid-19 put a halt to the music business, we decided to bring artists into our recording studio to cover our favorites from the Rock n Roll songbook. Enjoy Vintage Trouble honoring the 50th Anniversary of “War” by Edwin Starr!”

A Grammy win and five decades later, Vintage Trouble decided it was their turn to relay the message of “War” to the world. After being a little too forthright for The Temptations, “War” hit the top of the charts with Edwin Starr on August 29th, 1970, sitting atop the Billboard Hot 100 for three weeks.

Since forming in 2010, Vintage Trouble has quietly become rock ‘n’ roll’s best kept secret anointed by its very gods on international tours in every corner of the globe. Distilling swaggering rock, soulful blues, R&B grooves, and pop ambition into a bold and brash brew, the quartet has logged 3,000 shows across 30 countries on tour with The Who, The Rolling Stones, AC/DC, Lenny Kravitz, and Bon Jovi, to name a few. Along the way, they also performed on Later…with Jools Holland, Jimmy Kimmel LIVE!, Conan, The View, and The Tonight Show (four times in one year!) in addition to receiving acclaim from New York Times, NPR, The Wall Street Journal, Billboard, Rolling Stone, and more.

However, the times have not been on the band’s side this past year, along with most other touring bands. 2020 marks Vintage Trouble’s 10th anniversary, which was promptly cancelled by Covid-19. The band had a full European tour, including Scandinavia, as well as a US run with talks of an end of year Japan tour.