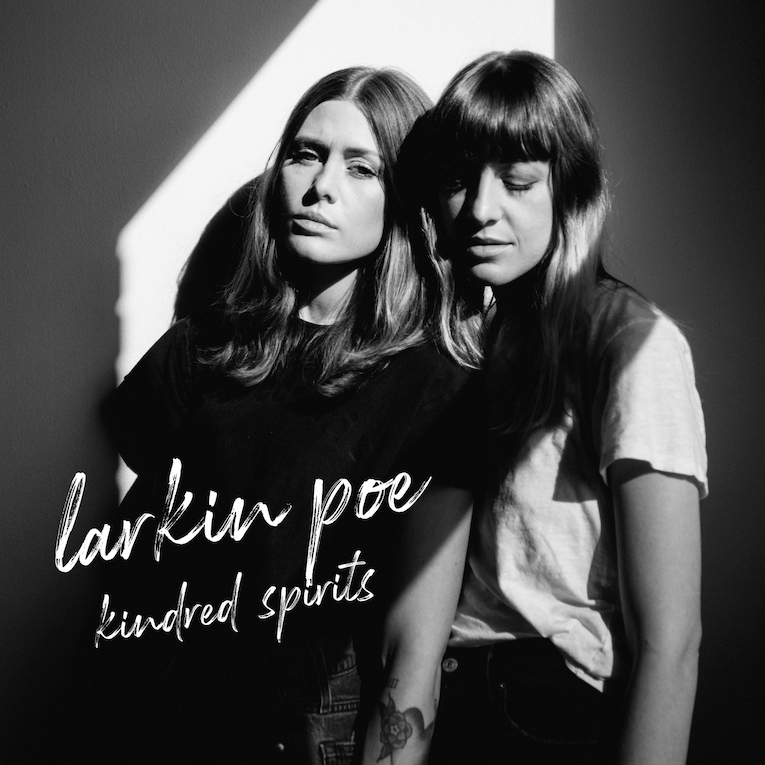 Grammy nominated roots-rock duo, Larkin Poe are set to release their first-ever acoustic covers album, Kindred Spirits on November 20 via their Tricki-Woo Records, following their fifth studio album, Self Made Man released in June 2020. Larkin Poe has reimagined each of the 11 tracks in stripped down acoustic fashion and recorded them live in the studio.

Kindred Spirits is a tribute to 11 of Rebecca and Megan Lovell’s musical heroes, artists with hit songs that have withstood the test of time. Not an easy feat. Recorded live and raw, the result is a sumptuous bath in roots sounds, beautiful vocals and harmonies, with more than half of the songs completely reinterpreted from their original form in a way only Larkin Poe can do.

Larkin Poe says, “Music is a bridge that can connect generations across time. In recording Kindred Spirits, our admiration for the artists who originally wrote and performed the songs blossomed into an even deeper reverence.”

And reverence is what this album is all about. The tracks in minor keys almost feel like a collection of hymns. Overall, the songs are inventive, rootsy interpretations that feature striking vocals, harmonies, guitar and lap steel, with emphasis on mood. If you look at the album cover, it’s a somber photo of Larkin Poe. Kindred Spirits is in keeping with that melancholy with the exception of four upbeat tracks. The desolate, spare numbers are stunning, revealing this sister duo’s natural gifts, which are considerable.

You just can’t fake this kind of talent. No amount of technology can create what Nashville-based Larkin Poe did on this album, on previous albums. They have such an individual style, one that harkens from the South but is also fresh, contemporary. Their ability to transform most of these songs in the way they did, is one more testament to their extraordinary musical ability and grit. They take chances, which in itself is fresh. They wouldn’t have gotten this far if they hadn’t.

With songs like “Fly Away” (Lenny Kravitz) you’d be hard pressed not to respect these two musicians for their creativity and for the artistry of their vocals and harmonies. The slide guitar on this track, in parts, resembles a groaning engine, adding texture and unusual tones to the song. It’s nothing like the original. But very much in keeping with their stripped back acoustic covers from two and three years ago. You’ll feel this one straight down to your toes.

“(You’re The) Devil In Disguise” is another standout, a transformation from the Elvis Presley original, changed to a minor key in sections simply by a few notes. This song conveys a different meaning by way of Rebecca’s mesmerizing vocals and phrasing, combined with Megan’s searing lap steel. A haunting number and nothing like the rock n’ roll skip of the original. Brilliant and chilling.

Growing up in a family of music lovers, a number of songs Larkin Poe gravitate towards, have been with them since childhood. They started a YouTube series in 2015 dedicated to paying tribute to their musical heroes, which took off when fans began requesting recorded versions of the songs. They started thinking about how an interpretative album might take shape. Enter Kindred Spirits.

Another moody and haunting rendition with stunning vocals and harmonies, is “Nights In White Satin” (The Moody Blues). The lap steel is an ever-present atmospheric element, as if it’s crying in the night. Definitely heavier than the original. Perhaps that was part of the intention with this album, to reflect the pain and suffering with what’s going on in the world, and in particular with musicians who have been crushed by the pandemic.

Kindred Spirits isn’t all plaintive. There are upbeat covers such as “Who Do You Love” (Bo Diddley), “Ramblin’ Man” (The Allman Brothers) and “Crocodile Rock” (Elton John.) They are well done interpretations with killer lap steel/dobro and acoustic guitar, and mellifluous vocals, sung by sisters with a true connection to one another.

Then there’s “Take What You Want” (Post Malone, with Ozzie Osbourne and Travis Scott.) Stripping back all the big production, drum tracks and vocal effects of the original, Larkin Poe created a standout—a soulful, roots version with resonant acoustic guitar in a drop tuning and gritty lap steel. Almost an entirely new song, Larkin Poe reinvented it in their unique rootsy style. Outstanding.