Review: ‘We Fly Free’ by When Rivers Meet 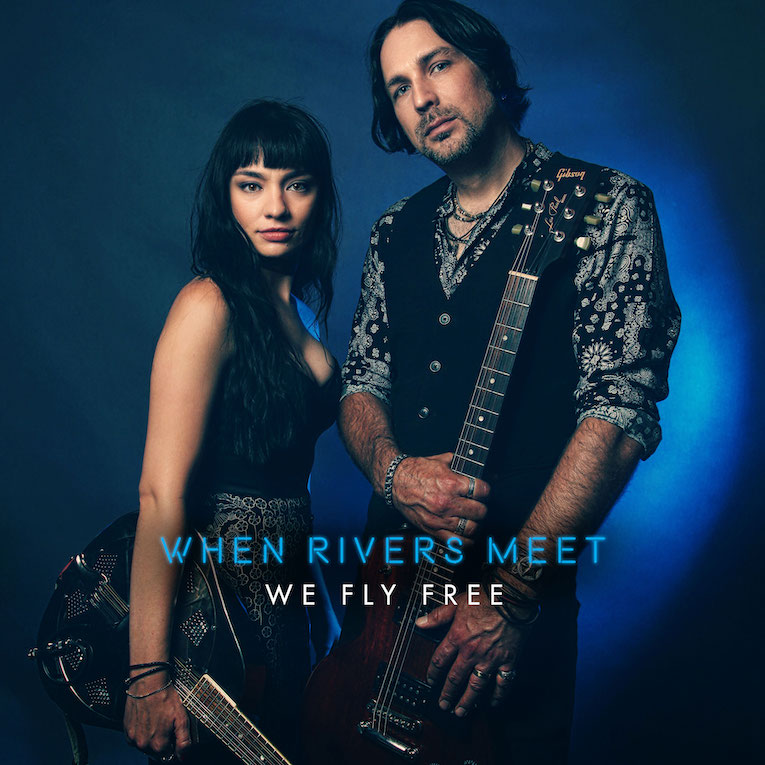 With two EP’s released over the last two years, British husband and wife blues-rock outfit, When Rivers Meet, stirred up a fair bit of interest, enough so that news of their full-length debut We Fly Free, released November 20th on One Road Records is justifiably gaining a lot of exposure.

For a blues-rock group, When Rivers Meet have an unusual set-up. Aaron Bond supplies guitar and back-up vocals. Grace Bond sings lead and plays fiddle and resonator mandolin. It’s a classic country/bluegrass combination rarely utilised for the blues. For We Fly Free, the duo is joined by Adam Bowers on percussion, bass and keys, and Robin G Breeze, who also shares bass and keys. Bowers also engineered and produced the record, with assistance from Breeze.

We have twelve original tracks here, beginning with “Did I Break the Law,” a rumbling monster built upon fuzzed-up guitar riffs and thudding, double-time drums. Echoes of 70s rock giants permeate this track, with its muscular, snaking energy and menacing undertones. Aaron whips up a storm on guitar, supported by organ vamps which moan and groan nicely. Grace’s slide resonator mandolin, buried a little deep in the mix, adds an effective, shimmering tension.

“Walking on the Wire” brings to mind the stripped-back work of Page and Plant on Walking Into Clarksdale. Similar to that record, there is a lot of blues and Americana in We Fly Free, both in tone and style. The (sometimes dual) vocals, it must be said, work very well, contrasting as they do with echoing layers of floating guitar. Production on this record is deliberately a little gritty, with lightning flashes of strings flickering through a broiling fog of distortion. The ethereal harmonies add to the sound of the record’s distinct identity, luring you into an urban night-world of heart-racing adventure.

Aaron and Grace possess a clear flair for songwriting and arranging. Things move nicely from loud to quiet to loud to even louder, with enough variation and breaks to hold the interest. While lyrically the duo don’t stray far from classic rock themes, the feel will transport you back in time while hurling you into the present by way of Grace’s impressive lead vocals. Witness “Battleground,” which is as good a slice of heaviness as you could wish for and a standout. “You make the ground shake up,” sings Grace over percussion which sounds like it could have been recorded in a vast underground vault. Instruments bleed into each other, creating a dense and all-encompassing canvas, full of enough dark hooks that it’s difficult not to get swept along. There’s much of the subterranean drama of Sisters of Mercy here, and the mighty power of early Queen, although When Rivers Meet are distinctive in their own right.

“I Will Fight” opens with some more of that beautiful slide mandolin before piano chords lead us into a slow-tempo, high-power ballad, replete with deep drums and a circling, vulture-like guitar. Grace’s vocals are highly likeable. It’s very certain that she puts her heart into it and her voice is equal to the task, clear and punchy when it needs to be and ultimately, affecting. Closer and title track “We Fly Free” doesn’t let up on the power. It’s a bold statement which does justice to the album as a whole.

If you are at all a fan of any of the bands mentioned in this review, or of classic rock in general, you will find a lot to enjoy in this set. This is honest-to-goodness, thumping rock played with love and passion.

Order/Save Link for We Fly Free