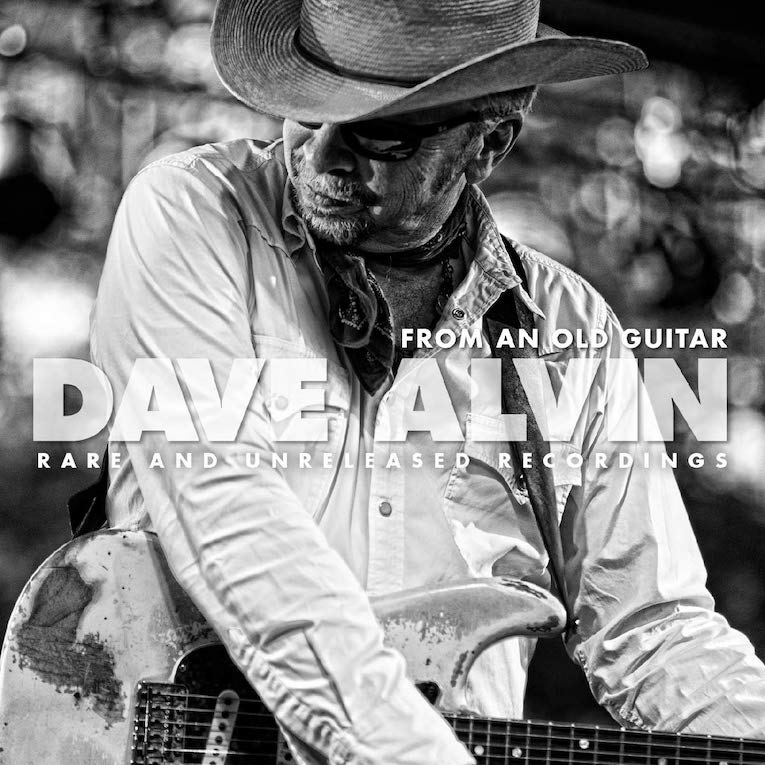 Grammy award-winning guitarist, singer, and songwriter Dave Alvin sends yet another blast of roots music greatness out into the world on his new album From An Old Guitar: Rare and Unreleased Recordings. The set comes out November 20th, 2020 on Yep Roc Records and features 16 songs that Alvin had tracked over the years for his own releases, tribute albums, and for the sheer joy of making music. Alvin produced the set himself and invokes the blues, ballads, folk and country/rock styles on original songs, songs by his close friends Peter Case, Bill Morrissey, and, Chris Smither, and influences including Willie Dixon, Bob Dylan, Earl Hooker, Doug Sahm, Lil’ Hardin Armstrong, Marty Robbins, and Bo Carter. There are also selections from departed comrades like Chris Gaffney, Amy Farris, and Bobby Lloyd Hicks and from old Blasters cohorts like Gene Taylor and various members of The Guilty Men/Women/Ones.

Dave Alvin first came to prominence in the early 1980s as lead guitarist and chief songwriter for The Blasters, the legendary roots rock band he formed with his brother Phil Alvin in 1979. Dave stayed with The Blasters until 1986, going on to work as a solo artist and as a member of the bands X and The Knitters. Alvin quickly emerged as a top-tier songwriter and his songs have been covered by Dwight Yoakam, Buckwheat Zydeco, and others. He’s widely known as one of the finest purveyors of American roots music active today and has developed an unassailable reputation.

Alvin begins the record with a swampy and haunting cover of Chris Smither’s “Link Of Chain.” His warm baritone voice and easy delivery give the song a confessional vibe, as if Dave is in the room singing just for you. He also plays acoustic guitar and piano on it and Danny Ott contributes some righteous slide guitar. Alvin follows this chilled-out opener with a gothic/blues/noir cover of Bob Dylan’s “Highway 61 Revisited” that’ll shake your soul so hard your grandparents will feel it and is very probably the mightiest piece of roots music you’ll hear this year. In Alvin’s hands, Dylan’s bare knuckle, biblical blues is transformed into the musical equivalent of a tornado-bringing pitch-black sky laced with God’s own lightning. He slowly speaks the lyrics in an apocalyptic manner that extracts their deadliest interpretation while the band churns out the pocket beneath him. This may be the best Dylan cover ever done by anyone and it’s going to make your year.

Dave busts out his lead guitar chops on the instrumental “Variations On Earl Hooker’s Guitar Rhumba.” His melodic playing style is pure ear candy and he leads an incredible band in and out of major and minor keys like a master. Chris Gaffney shines here on accordion, as does drummer Steve Mugalian. Another beautiful moment is Alvin’s take on Robert Lee McDill’s country waltz “Amanda,” which was a number-one hit for Waylon Jennings in the 1970s. The song is a message of love from a middle-aged man to the woman and the music he loves and Dave’s delicate and emotional performance is everything. Mike Daly’s steel guitar adds just the right amount of roadhouse devotion to the arrangement and won’t leave a dry eye in the house.

“Albuquerque” is pure three-chord, dancefloor-packing psychedelic blues glory. Dave works his wah pedal until the walls start to move and his ace band keeps the groove powered up. Lillian Hardin Armstrong’s “Perdido Street Blues” lets Alvin work out on his vintage 1934 National Steel Duolian resonator guitar and instantly takes listeners back to the days when blues and swinging jazz freely intermingled. Greg Leisz’s lap steel is the ideal foil to Alvin’s tone and the two men together are unrelentingly entertaining.

Willie Dixon’s “Peace” brings some straight-on heavy blues to the record, as well as a socially-relevant message that hits this pandemic/election year right on target. “It don’t make sense if you can’t make peace,” Alvin intones, giving us another dose of his end-of-the-world best. He has a knack for this kind of audio drama and will keep you wrapped up in the track to the end. Other outstanding tracks on the album include Alvin’s own “Krazy And Ignatz” featuring steel guitar queen Cindy Cashdollar on dobro and Peter and Joshua Case’s “On The Way Downtown.” Dave Alvin has always been a remarkable artist and From An Old Guitar: Rare and Unreleased Recordings will only extend his well-deserved fame. Spin it once and you’ll fall in love.