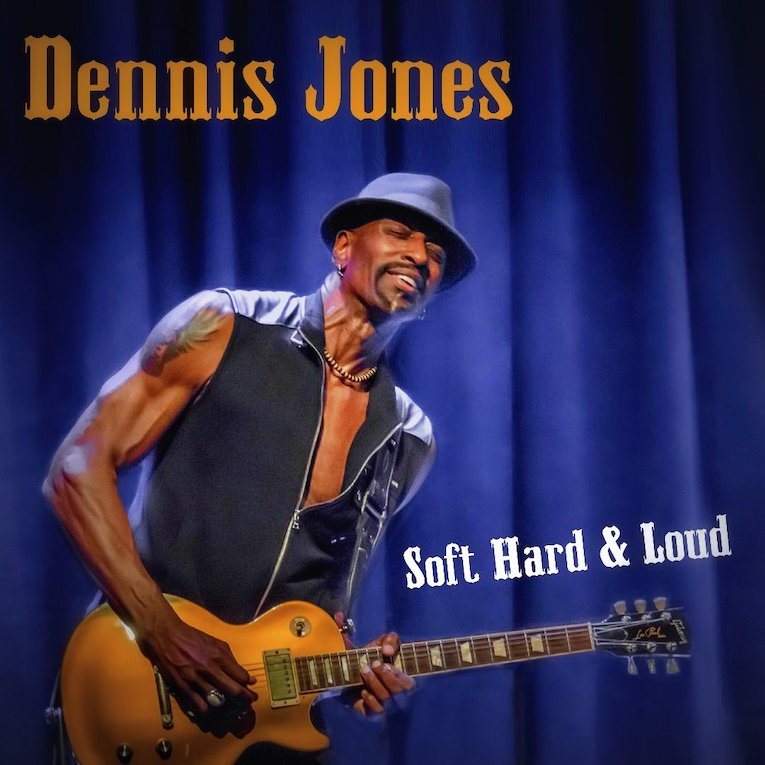 Los Angeles blues guitarist and vocalist Dennis Jones dropped his seventh album as a leader, Soft Hard & Loud, in October of 2020 and the set is as hot as this year has been crazy. Jones is a tasteful powerhouse of a musician who touches on every emotion and comments on current events in his original songs while still being able to rip fiery guitar solos with the best in the scene. His contemporary take on the blues includes funk, rock, and reggae influences that make him unique and identifiable. His personality informs every note and word on Soft Hard & Loud and makes each song an individual world he allows us to visit. Jones co-produced it with his brawny rhythm section of drummer Raymond Johnson and bassist Cornelius Memes and the core of the record is the sound of these three deeply connected musicians sharing brain waves.

Jones is a seasoned player who has logged thousands of hours and road miles practicing his craft. He won the International Blues Competition in Memphis in 2004 as part of Zac Harmon’s Band, opened for important artists like Johnny Winter, Buddy Guy, Dick Dale, and the Experience Hendrix Tour, and has gone on tour in Australia, Italy, France, Germany, Austria, Poland, Switzerland, and Slovenia. His guitar work is informed by Jimmy Page, Jimi Hendrix, and Billy Gibbons and gets injected into songs that allow him to take those foundational sounds to places and levels that reach beyond simple classic rock emulation. His music is thoroughly modern but Jones’ mix of vintage knowledge underneath it also makes it timeless and emotional. He’s one of the freshest blues artists out there right now and has what it takes to get big.

Jones starts the record with the funky “Revolves Around You,” which tells an honest story about a stressful relationship with a narcissistic partner. The track is dynamic, bold, and features some outstanding and atypical lead guitar playing that immediately gives Jones the aura of an innovator. He doesn’t lean on genre cliches but creates new melodies that point towards his own vision of how things should be. Prepare to be instantly hooked. “I Love The Blues” is a lowdown and slow Albert King-ish song that relates Jones’ feelings about what he does. His guitar magic here is quieter but no less impressive than his more blazing solos and his vocals easily handle the heavy lifting that makes this one fly.

Jones starts hitting harder on “Like Sheep.” It’s a gritty rock song that asks a lot of heavy questions about people and society that are thought-provoking and relevant. The groove is hard and funky and Jones laces power chords and slinky lead lines through it like a master. He flirts with a Ben Harper-esque vibe around the edges of this one but ultimately holds position in his own lane. “Front Door Man” is an upbeat shuffle with a taste of Jimi to it. Jones lays down some intense blues licks over a driving pocket and easily lights up the sky.

“I Hate Hate” is a reggae track that finds Jones delivering more social commentary. “I hate hate but I don’t hate you” he sings, using the song to speak positive ideas about race and unity that are particularly important to hear in our present highly divided condition. Jones spits truth fearlessly over a bottomless beat and opens his heart to us all. “Burn The Plantation Down” takes a more aggressive approach to social justice and puts Jones’ anger and frustration at center stage. His unflinching lyrics and tough guitar work leave no doubt as to where he stands. It’s the best song on the album and closes these sessions out with a strong statement. Dennis Jones is an absolute beast of a musician and songwriter and Soft Hard & Loud will claim a space in your rotation after a single listen. Be cool and let it happen.