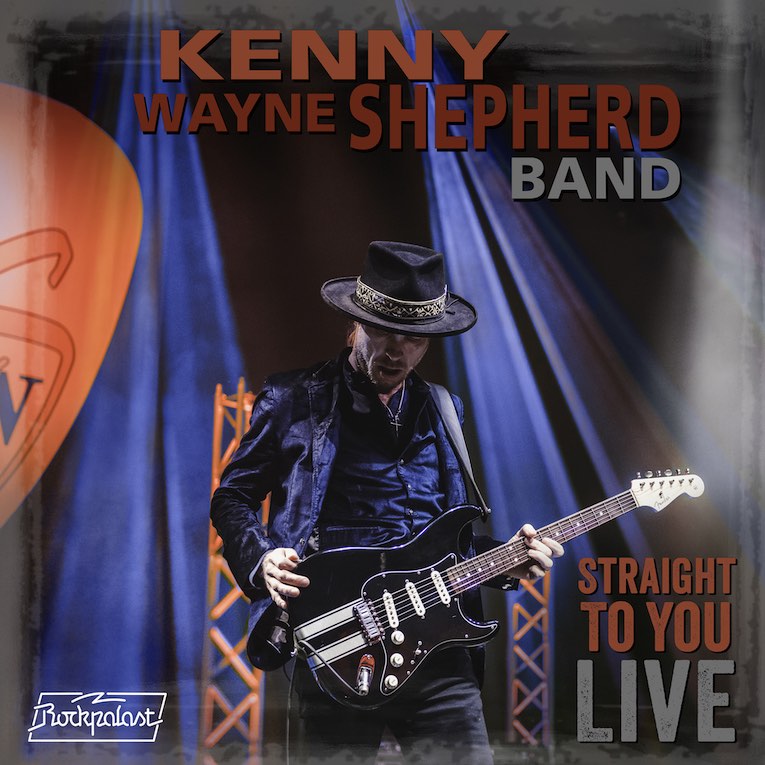 The Kenny Wayne Shepherd Band release their first live DVD, ‘Straight To You Live,’ on November 27, 2020 via Provogue/Mascot Label Group. The live set is available on DVD +CD, Blu-Ray +CD, 2LP vinyl and digitally. This review is based on the DVD.

And what a live concert film it is. You can’t go wrong with the Kenny Wayne Shepherd Band, with five-time Grammy nominated blues/rock guitarist, singer and songwriter Kenny Wayne Shepherd, Noah Hunt on vocals and guitar, Chris Layton on drums, Joe Krown on keyboards, Scott Nelson on bass, Joe Sublett on sax, and Mark Pender on trumpet.

Filmed at the Leverkusen Jazzstage in Germany during the Kenny Wayne Shepherd Band tour to support their latest album, The Traveler (2019), thankfully this concert was captured on film before the tour was cut short by the COVID-19 pandemic. For those starved for live blues/rock music, especially Kenny Wayne Shepherd music, grab this straight away. Straight To You Live is a must see. It’s about as live as you can get and its filmed beautifully, crisp and clear, with great sound and multiple camera angles so you really feel like you are there.

The seven-piece band takes the stage, most dressed in all black, including Kenny Wayne Shepherd with Stratocaster in hand. They kick off the show with “Woman Like You,” a high-energy rocker from The Traveler. Vocalist Noah Hunt with his rich, soulful voice, blasts off the song. With swagger and confidence, Shepherd heads into the first killer guitar solo of the night, muscular vibrato combined with soulful, virtuosic skills.

The stage is set up in minimalistic fashion with a few tall, steel, open structures with neon blue tube lights snaking up the rails. Just enough atmosphere, along with interesting lighting, as a backdrop for a dynamic artist who comes alive on stage with his guitar. The band is in peak form.

Without a second to spare, Shepherd and the band launch into “Mr. Soul” (Buffalo Springfield), a rocking number with Hunt on main vocal duties and Shepherd on guitar and backing vocals. Horns play a significant part of this song and in the entire show, expertly played and in just the right places. The band is tight. Shepherd plays blistering guitar solos on every song, and for guitar fans, blues/rock fans, this is a feast. Straight To You Live is an experience on every sensory level.

After “Long Time Running” where Hunt’s full-bodied vocals shine, Shepherd introduces the band and asks the audience, “How’s everybody doing tonight?” An extended version of “I Want You” finds Shepherd on lead vocals, his voice is in fine form, stronger than ever. This blues rocker is a standout and he and the band relax into the groove. Shepherd, playing a different Strat now, sinks into an impressive and soulful guitar solo, followed by interludes of organ, sax and trumpet. The band is rocking. And the crowd goes wild, whistling, clapping, hollering. 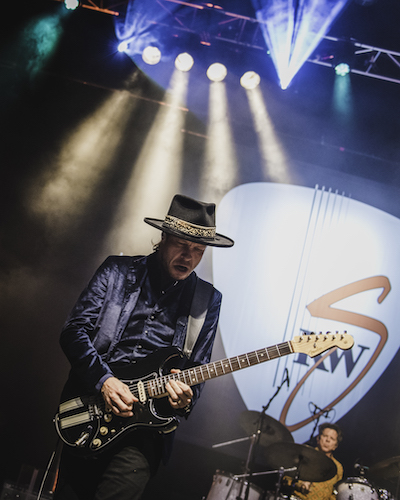 If you haven’t seen Kenny Wayne Shepherd Band perform live, you’re in for a treat with Straight To You Live as it showcases Shepherd’s passion and energy on stage, his synergy with Hunt, and their interplay, the band’s tremendous performance. The live environment is where Shepherd lets it rip on guitar and that intensity is riveting. He takes on more vocals in this show, Hunt backing him up, playing rhythm guitar. And the band never lets up.

Shepherd owns the stage on “Diamonds and Gold” (Lay It On Down) with his excellent vocals and wah-soaked guitar on this rhythmic number. Shepherd and Hunt’s dual vocals are one of the highlights of the song. Over the 90 minute show, the formidable Shepherd and his fiery fretwork never falter. He is at one with the music, almost fused with his guitar. By the end of the tune, Shepherd is close to the edge of the stage, giving it up, giving in to the music.

After trading out his Strat for another, Shepherd says to the crowd, “This is one of my favorite old blues songs by Elmore James called ‘Talk To Me Baby.'” A straight up blues tune with horns, tight drumming and bass, Shepherd takes the lead on vocals, one of his best vocal performances of the night. Strolling across the stage, he peels off another compelling guitar solo.

It’s always refreshing to hear a celebrated artist tell the audience that it’s an honor to play for them. After thanking them, Shepherd and the band slowed things down a bit, launching into a blues/rock ballad, “In The Heat of the Sun” from the album, How I Go. Noah Hunt’s vocals are soulful, beautiful with rich texture and tone. An 11-minute stunning song.

By this time, Shepherd and the band are completely immersed in the music, loosened up. The interaction between Shepherd and Hunt, the balance they strike on stage, is impressive. They work together smoothly—Shepherd’s guitar riffs intersperse Hunt’s vocals, revealing intuitive connection between the two musicians. Shepherd’s guitar riffs move from subtle and soulful to a masterful peak of intensity. Incredible. You can see why he is so revered as a guitar player, as an artist.

Shepherd and the band continue to shift things up with songs that include a nine-minute workout on fan favorite, “Shame Shame Shame” from his debut album, Ledbetter Heights. Hunt is at his best here, his voice unlike any other male vocalist I can think of. The keyboard player performs a brilliant piano solo, and Shepherd retreats to allow him his turn in the spotlight, then reappears from the shadows to play one of the best guitar solos of the entire show. Mind-blowing. The whole band was feeling it, the love of the blues ever-present.

Shepherd and the band end the set with another track from The Traveler and return for a three-song encore, starting with “Blue On Black” from Trouble Is…The dual vocals with Shepherd singing one octave higher than Hunt is a highlight, along with more outstanding guitar work. Ending the show is one of the most searing covers of Hendrix’s classic “Voodoo Child (Slight Return)” I’ve seen. Shepherd, Hunt and the band are completely in their element on this song and just kill it. Shepherd’s playing is so good, I rewind and watch it again. Phenomenal.

The show ends to a cheering crowd. Straight To You Live is the next best thing to being there.

Pre-order link Straight To You Live