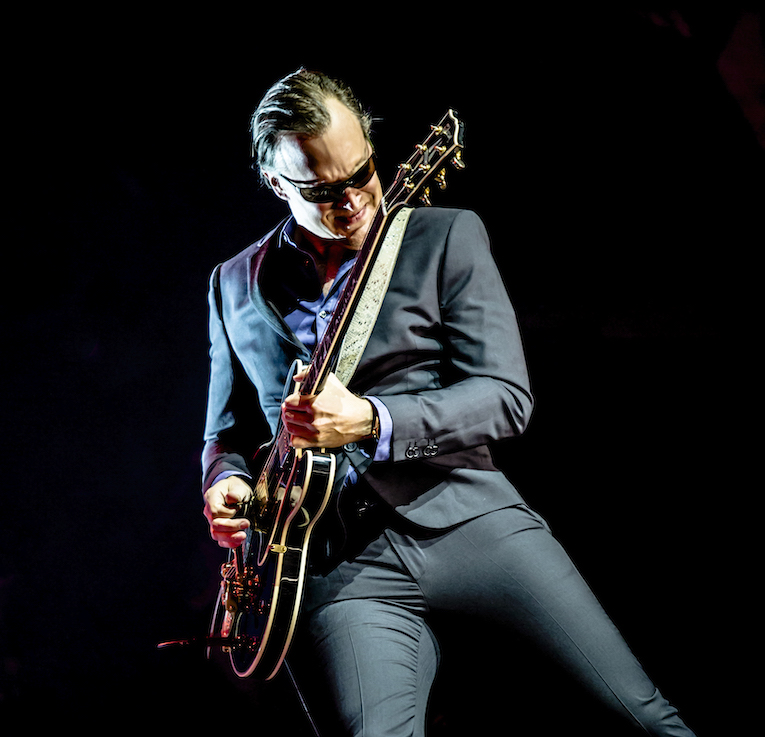 Packed with live concert footage of blues/rock guitar hero Joe Bonamassa, behind the scenes interviews with music industry legends and the man himself, Guitar Man chronicles Bonamassa’s rise to fame, from teenage wunderkind mentored by B.B. King to blues/rock veteran at the age of 43 with 22 #1 Blues albums. The film is set to release December 8, 2020 via Paramount Home Entertainment and available on Video-On Demand and for digital purchase.

Directed by Kevin Shirley and Philippe Klose, Guitar Man is detailed and dense with information about Joe’s career trajectory and his impressive accomplishments. Packed with live footage of his dizzying ability on guitar, singing and songwriting, the film showcases Joe Bonamassa’s maverick approach and inspiring perseverance to pursue a life-long dream of becoming a professional guitar player and blues artist. One of the most hard working musicians, Bonamassa tours incessantly, has released 13 studio albums, 17 live albums, 15 live video albums, and three collaboration albums (Beth Hart, Mahalia Barnes.) He has received two Grammy nominations.

A fast paced film, Guitar Man opens on Joe backstage getting dressed for a show, his music the backdrop. In a voiceover, Joe narrates how he has to interrupt conversations with people right before his show to excuse himself to become “that other guy.” We then see him on stage, guitar in hand, saying to the audience, “They always write off the blues. Nobody likes the blues. Well, I think we’ve proven tonight that at least 9,000 people like the blues.” And the crowd goes wild.

Right from the start we see Joe Bonamassa as a young rebel, committed to the blues, frustrated by the demands of the music business to be a certain type of artist, manager Roy Weisman at his side, who risks just about everything to help Joe succeed. As a member of the band Bloodline, composed of music legends’ kids, Joe shreds guitar like no other 13-year-old. What ultimately breaks up this band is that Joe is far beyond these musicians in maturity and dedication to music. He just wants to play guitar. Career disappointments ensue and Joe commits to the blues, taking charge of his career as a response to feeling exasperated with the industry. And it is that love of a good challenge that permeates the film and sets Joe afoot into packed venues, and ultimately hurls him into a performance at Royal Albert Hall.

Guitar Man features back-to-back highlights from decades of Bonamassa concert footage, his musical growth in various stages of his career and his passion for blues/rock. To watch a musician so consumed with music, with guitar, and who consistently challenges himself, is awe-inspiring. Brilliance comes to mind. 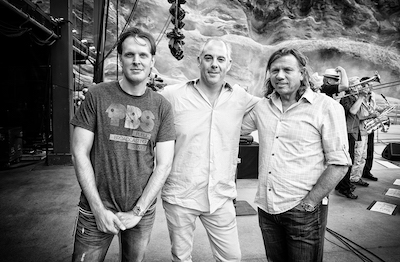 Guitar Man briefly shows Joe as a human being, a regular guy dressed in jeans and a baseball cap who dons a persona for his performances on stage, complete with monochromatic suit, sunglasses, and slicked back hair. “He really is two people,” Shirley says in one of many interview clips from his seat in the recording studio. It’s moving to see Kevin Shirley and Roy Weisman, who Bonamassa has stuck with through the years, not only respect him but truly admire him.

Some of the most interesting passages are of Joe in the recording studio, where we see his creative process with a few of the musicians he’s worked with.  An interesting scene captures Joe in an L.A. studio while Shirley explains to the camera that he coached him to pour all of his emotion from a recent romantic breakup, into a guitar solo on the song “Slow Gin,” which he does. The guitar solo is stunning, soulful. That Bonamassa has the ability to transform a bad situation into greatness, is impressive. And we see that time and time again throughout the film.

There are some thrilling live performance clips, one of which is Bonamassa’s live performance at Royal Albert Hall, a turning point in his career and one he manifested himself. We see him playing the first song he ever learned on guitar “Further On Up The Road” at this prestigious venue with one of his idols, Eric Clapton. Before the show, Bonamassa confesses his anxiety to the camera about playing there, realizing that his entire career is on the line based on his performance. Weisman also has his doubts, unsure that Bonamassa can fill that venue. But he does. And the look on Joe’s face as he walks out on stage, is one of sincere joy, almost awe that people actually showed up for him. It is one of the most moving and most human scenes in the film.

At this point, Shirley takes over in the majority of interviews and we see his savvy marketing strategies for Joe and their partnership. They both like to consistently change things up. Shirley suggests an idea to Joe about “embracing world blues.” They develop and record an acoustic show at The Vienna Opera House with musicians from all over the world integrating various instruments from different cultures. The emphasis is on the universal language of music.

Guitar Man moves into side project Black Country Communion, the rock band with Bonamassa, vocalist Glenn Hughes, drummer Jason Bonham and keyboardist Derek Sherinian, a supergroup that Shirley put together after attending an impromptu performance with Hughes and Bonamassa. The film reveals another side to Joe’s musical interests—classic rock with British rock influences. Two outstanding albums later, Joe expresses frustration with the tour and its taxing nature, adding that it was good but in small doses. A lot of hard work behind him, he returns home, burned out. To the camera he admits, “Maybe I was taking on too much.” 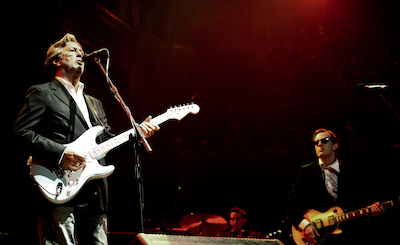 Perhaps for renewal or simply to educate the viewer about the roots of the blues, Bonamassa and Shirley travel to Rosedale, Mississippi and revel in the history of the blues. Driving around in a red 1957 Chevy, they discuss the Robert Johnson folklore, and bluesmen including Muddy Waters and Howlin’ Wolf. In reference to the great bluesmen, Joe says, “There was a quiet dignity about them.” The film pivots to live concert footage where he and the band embark on a tribute to the blues and the Three Kings (B.B., Albert and Freddie King), found on Live at The Greek Theatre.

Fast forward to an interview with Joe about his passion for the blues and keeping the genre alive. He describes his organization Keeping The Blues Alive Foundation, founded by Roy Weisman and himself, and his desire to give back and further music education.

Guitar Man reveals cursory glimpses into Joe Bonamassa. The goofy, funny guy who has a “Nerdville” sign on the driveway to his house, and the incredibly talented, hardworking guitarist, singer and songwriter who lives and breathes guitars and music. It’s exciting to watch his progression through the years, never giving up, faithful to his love for the blues. With his rise to fame, there are plenty of trips and falls along the way but Bonamassa picks himself up each time and channels the experience into his music, often creating a new chapter. And that, is greatness.

There is not one second of lag time in the 108 minute documentary. As fast-paced and exciting as it is, the window into Joe Bonamassa as a person, as an artist, seems at an arm’s length. I kept hoping for more of a glance into what drives this incredible artist, apart from his rather removed interviews in front of a wall of Fender amps, or Shirley’s descriptions of Joe’s talent. That considered, Guitar Man is still a fascinating documentary about Joe Bonamassa, the top selling blues artist today. 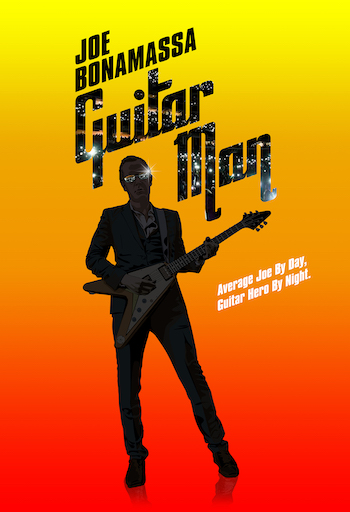