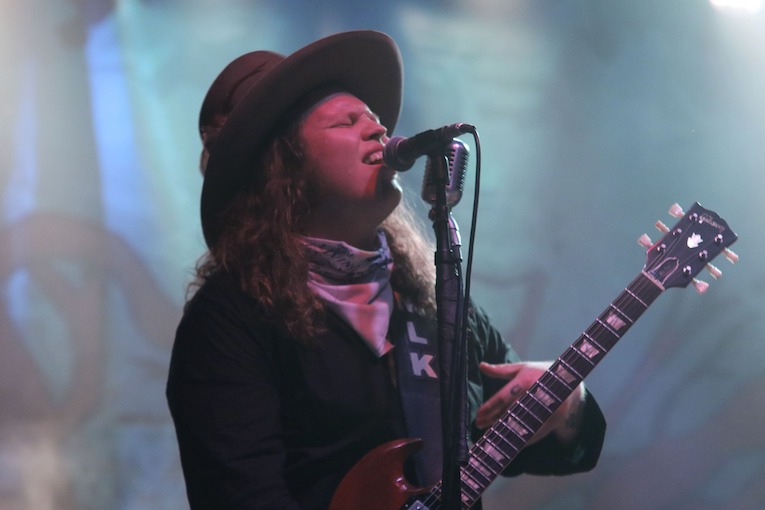 24-year-old guitar and vocal phenom, Grammy nominee, Marcus King and his hot-handed band put on a top-tier show December 5th, 2020 at 3rd and Lindsley in Nashville, Tennessee that was live-streamed via nugs.tv and attended by an in-person socially-distanced audience. King is a major talent with a cool and original sound that combines Southern Rock, classic R&B, and sweet soul music with virtuoso guitar chops and exceptional tones. His songs fuse the grit of the blues with a melodic and soulful approach on both guitar and vocals that’s completely addicting and entertaining. Mix in a whole bunch of well-written songs, musicians who have been stage-deprived for most of this year, and a crowd in need of its own live music fix and you end up with the kind of experience none of us can live without.

King is a fourth-generation musician from Greenville, South Carolina whose grandfather was a country guitarist and father is the still-working bluesman Marvin King. His latest record, El Dorado, was produced by Dan Auerbach of The Black Keys and has garnered raves around the world. His skintight band includes drummer Jack Ryan, bassist Stephen Campbell, trumpet/trombone player Justin Johnson, saxophonist Chris Spies, and keyboard player Dane Farnsworth and was augmented in Nashville by backup singers Kate Barr and Maggie Rose. As a unit with Marcus, they combine powerful chops with sophisticated and nuanced musicality. King’s voice is so good that he could put the guitar down if he wanted to but, since he doesn’t, he’s a “total package” artist and entertainer who appears to have a long career ahead of him.

King and company took the stage, along with Otis the venue dog, with a distinct sense of good vibes and positive energy. Otis quickly wandered off and King launched the band into the smooth and funky “One Day She’s Here” from El Dorado. King’s high vocal range and technical singing skills are the equal of anyone out there in any genre and, from the beginning of this song, it’s clear that he’s anything but just another blues guitarist. He can, however, absolutely get down on some blues, a fact he demonstrated on his cover of Muddy Waters’ “I Just Want To Make Love To You” that came next.

Keyboardist Dane Farnsworth used his electric piano to bring in the emotive ballad “Beautiful Stranger,” also from El Dorado. Most rock and blues singers beg off from this sort of delicate, vocal-centered sound but it’s here where King’s skills truly shine. He has an authentic and impressive voice that holds up live and gives him an instant identity that’s not soon forgotten. 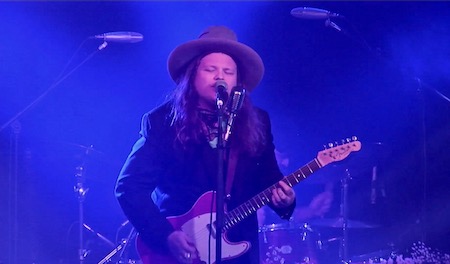 “How Long” came off as the nod to 60s soul that it is, horns and all. The band’s pocket was huge here and throughout the gig and set Marcus up perfectly to rock the house. Everyone involved kept the magic going on King’s romantic “Love Song,” a hit-single-worthy number that again put his voice at center stage. “Break,” another slow jam from El Dorado, completed the task of establishing King as one of the premier singers in roots music today. What was amazing about his live takes of these songs is the ease with which he incorporated his considerable lead guitar skills without ever seeming excessive.

One of the show’s best moments was King’s cover of the Luther Vandross hit “Superstar.” His voice lent itself well to this eternal classic and the band got underneath it in just the right way to keep us all in the groove. King then turned in a hard-rocking version of Les McCann and Eddie Harris’ late 60s protest jam “Compared To What” that cranked the heat all the way up and allowed him to let his guitar chops all the way out.  Next, King stopped the band in its tracks and shifted into a rendition of The Temptations’ 1972 smash “Papa Was A Rolling Stone” that got the entire room moving.

“Rita Is Gone” brought back King’s funky soul side and the rhythm section’s velvety feel. Other great spots in the set included “Young Man’s Dream” and a satisfying romp through The Fabulous Counts’ instrumental “Jan Jan.” He closed the main set in style with his epic “Goodbye Carolina,” from his album Carolina Confessions, which of course, left the people wanting more. King encored with a mellow unreleased new song he didn’t give the title to and ended the night with an all-hands-on-deck rock jam that melted every face in the vicinity. In spite of COVID-19 and pandemic restrictions, Marcus King and his band reminded everyone who watched how vitality important live music is and how life-affirming it is to witness it going down. Don’t miss his next show.