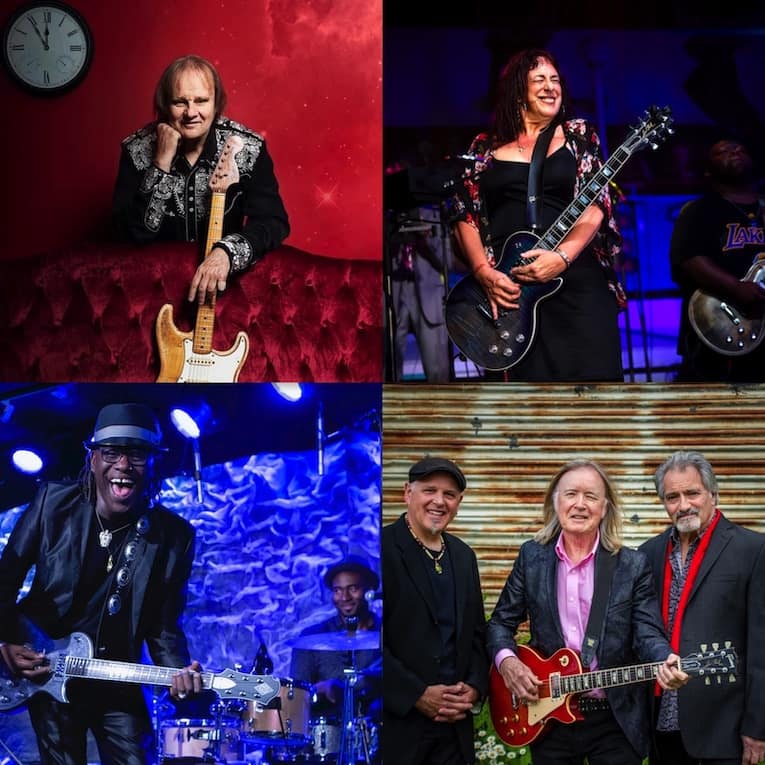 As we near the end of one of the most challenging years with the pandemic, one thing remains constant—great music and great artists. I’m willing to bet that blues, rock and roots music helped get you through 2020. It sure did me and I’m so grateful.

At Rock and Blues Muse, we had the privilege of talking to some of the most interesting and celebrated artists/bands over the last year. I believe our interviews delve deeper into conversation so you get to know them as people a little more, understand their creative processes, their loves and dislikes. And I have to say that musicians really are some of the most fascinating people.

This year, five of our favorite interviews are with Walter Trout, Kim Simmonds (Savoy Brown), Joanna Connor, Bobby Rush, and Joe Louis Walker. Kick back and read our interviews of these incredibly interesting and talented musicians.

Kim Simmonds of Savoy Brown
One of the founding fathers of British Blues, guitarist, singer-songwriter and bandleader Kim Simmonds, formed blues/rock band Savoy Brown in 1965. The group was one of the “big six” blues bands of the British Blues Boom in the UK, along with John Mayall, Fleetwood Mac, Jethro Tull, Chicken Shack and Ten Years After. Simmonds has been Savoy Brown’s guiding hand from their first singles released in 1966 through to their newest release, their 40th album, Ain’t Done Yet, out August 28, 2020.

Kim Simmonds is known as a legendary guitar player. He and the band have headlined concerts at Carnegie Hall, the Fillmore East and West, and Royal Albert Hall, and their albums and singles have hit many Top 40 Billboard Charts through the years, with Witchy Feelin’ (2017) reaching #1 on the Billboard Blues Chart.
Read the Interview

Joanna Connor
Chicago-based Joanna Connor, slide guitar virtuoso, singer-songwriter is a fierce musician known as the Queen of Blues/Rock Guitar. With 13 albums to her name,  her most recent, Rise, (2019) was released on M.C. Records to critical acclaim. Connor has played with just about everyone of note, including Jimmy Page, Buddy Guy, James Cotton and Junior Wells. An aggressive blues/rock guitarist with a tight groove and flavors of jazz and funk, Joanna Connor is one of the most powerful female musicians today. Joe Bonamassa produced her upcoming album, a release that’s generating a lot of excitement.
Read The Interview

Bobby Rush
Grammy winning blues legend, Bobby Rush is a celebrated blues musician, singer, songwriter, guitarist, and harmonica player who is known for his spectacular live performances. Inducted into the Blues Hall of Fame, Rush won 12 Blues Music Awards, including B.B. King Entertainer of the Year and 48 BMA nominations. He co-stared in the 2014 documentary Take Me To The River alongside Terrence Howard, Snoop Dog and Mavis Staples, and his songs have been featured in the Samuel L. Jackson film Black Snake Moan, HBO’s Ballers, and more. Rush appeared in the Martin Scorsese PBS docu-series The Blues with his own segment in the episode “The Road To Memphis” and appeared in the 2019 film, Dolemite Is My Name starring Eddie Murphy.

At the age of 86, Bobby Rush returned to his roots with his latest and 27th album, Rawer Than Raw was released August 28, 2020, a stripped down acoustic tribute to the rich blues history of the Mississippi.
Read the Interview

Walter Trout
Multiple award-winner, Walter Trout has been nothing short of prolific over the course of his seven decades on this earth. He’s released 27 solo albums over a career that has spanned the globe, and is one of the great purveyors of the Blues. His new album is Ordinary Madness, was released August 20, 2020.

Between 1981-1984 he was the lead guitarist for Canned Heat. He went on to be lead guitarist in John Mayall’s Bluesbreakers, following in the footsteps of Peter Green and Eric Clapton. When Trout walked away from the Bluesbreakers, he embarked on a solo career that has yielded a catalogue that has established a deep legacy in the world of Blues, Americana, and the realm of revered guitarists, singer-songwriters. There is a documentary about Walter Trout’s life and a biography titled Rescued From Realty, co-written by Henry Yates. Trout continues to deliver inspired recordings and performances that reflect his deep perspective.
Read the Interview