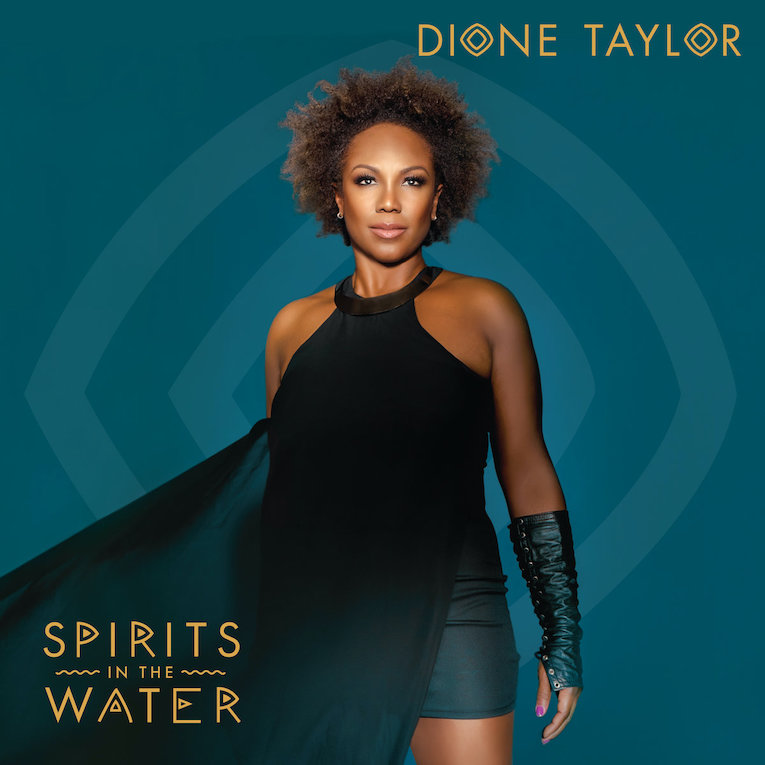 Here is something a bit special to brighten your January. Canadian blues and roots singer-songwriter Dione Taylor is back with a new album Spirits In The Water, her fifth since her Juno-nominated debut, 2004’s Open Your Eyes. As with so many wonderful musicians, Taylor’s earliest experiences with music came through the church. Since then, she has toured across America, Canada and Asia, performing for no less than the President of the United States and Queen Elizabeth II. Spirits In The Water looks set to raise the bar even higher, with three 2020 Maple Blues Awards nominations for ‘Best New Artist,’ ‘Female Vocalist,’ and ‘Songwriter of the Year.’ Take particular note of that ‘Female Vocalist’ award; Taylor’s voice is indeed something to be savoured.

Spirits In The Water comes with an intriguing premise. There is a legend, among the Yuchi Indian Tribe, concerning the Tanasi (‘Singing River’) in Tennessee. Inside these waters lives a woman who sings songs of protection to all those who can hear. Taylor, inspired by this piece of folklore, has crafted a memorable set of blues/roots-rock songs.

“Water” opens the show with a rumbling, rattling piece of Americana. Slow, thudding drums, ominous bass and sharp-edged guitar. “Deep in the dark dead of night,” sings Taylor, “there is something in the water.” Taylor’s voice is smooth and powerful, with echoes of the gospel/blues style of one of her musical heroes, Etta James. It is a beautifully evocative song, a dusty, midnight journey which stirs and boils to a mighty crescendo.

The bone-shaking, swamp blues of “Workin’” vamps delightfully, with hand-clap percussion and foot-stomping rhythms. Taylor’s voice, as strong as it is nuanced, alternately floats above and spears through the dense wall-of-sound production, which builds to a whirling, frenetic climax. Taylor has partnered with some interesting collaborators for this set, including producer/writer Joel Schwartz, who also contributes banjo and guitar here, and producer/writer Sandy Mamane, who co-wrote two of the tracks.

With Spirits In The Water, Taylor makes the difficult seem easy, creating radio-friendly music with serious depth. These songs are immediately accessible, yet there is nothing throwaway about them. Taylor brings a deep and intuitive understanding of the eternal power of folk-mythology. Married to her mastery of blues, gospel and rock, it makes for a compelling listen. Taylor knows, and more importantly feels, just what it is about roots music that stirs the soul. With first-class musicians behind her, and a wide palette of tones and emotions at her command, this talented singer finds just the right balance and “hits it out of the park” every time.

The title-track itself shimmers beautifully. Washes of sound, a clattering back-beat and swells of guitar propel the listener through simmering verses and an instantly memorable chorus. “Down The Bloodline” is particularly effective, a rousing blues-Americana, highly cinematic piece, with loving blues chords, menacing organ and swirling, shuffling percussion. “Darkness” creeps in beneath dark curtains of wavering sound through which pin-pricks of guitar shine through. “Down, down, down, far below,” sings Taylor, “sing yourself safely into the afterlife.”

Taken as a whole, Spirits In The Water is an impressive statement. This is honest, earthy roots music draped with a sheen of epic rock and scattered liberally with musical hooks. This sort of balancing-act is hard to pull off convincingly. Taylor and company do so with aplomb. Fans of hard rock, blues or the style of Robert Plant’s roots-rock solo work are equally served here, and that serving is a delight.

Order link for Spirits In The Water