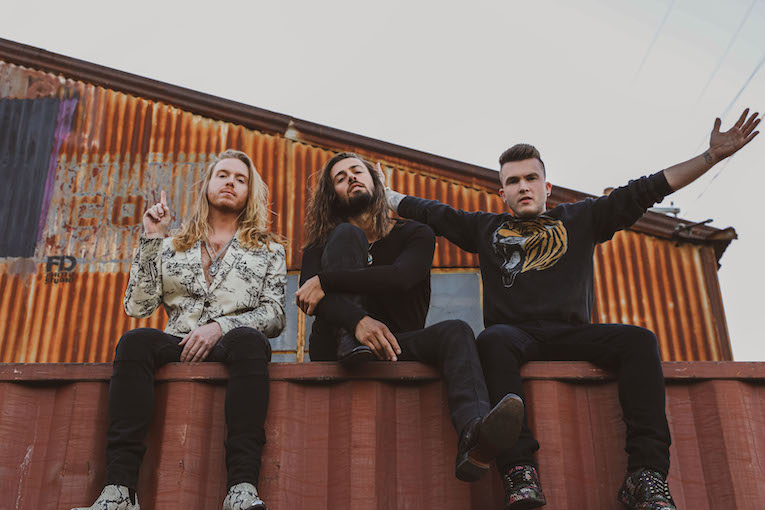 Los Angeles, CA — LEVARA and Mascot Records present “Automatic,” the lead single from the band’s debut self-titled studio album coming May 14, 2021. Guitarist Trev Lukather offers, “’Automatic’ is a statement.  It is the song that started it all for us as LEVARA.  This song set the standard for the album, and really solidified the sound that we would run with throughout the debut album.  It elevated us into a whole new universe and we couldn’t be more grateful. It’s everything we are as a band – Anthemic, massive drums, epic fills, loud guitars, soaring solos, huge vocals, unreal high notes, strong melodies and a hook that you can’t get out of your head.  This is our main single and this is the true beginning of what’s to come. Can’t wait.”

Trev Lukather, Jules Galli and Josh Devine are LEVARA.  Collectively, their musical union brings life to the individual talents of three musicians that together have enriched the aural landscape for all of us. Their songs offer an escape, as all music does, with points of reflection that relate to any listener’s life. The collective hope is simple. To be the catalyst for each and every person who comes across the music to find revelations through the experience of hearing these songs.

Their union merged in Los Angeles, one The World’s epicenters of musical creativity. Singer Jules Galli emigrated from France, while drummer Josh Devine chose L.A. as home versus his native United Kingdom following success behind the kit with One Direction. There they found common vision with Trev Lukather (guitar), son of Toto’s Steve Lukather, one of SoCal’s most successful ensembles to ever emerge from the city.  On some level these three players believe the universe brought them together.

Singer Jules Galli reflects, “Automatic is about the magic in a moment. The way this song was born in the green room of a Foreigner show we were opening for, to getting a record deal, and finally releasing it to The World as LEVARA…So much has happened since the creation of this anthem. I mean, we were a different band before we wrote it! It’s incredible what a song can do. I hope it means as much to our fans as it does to us.”

Drummer Josh Devine shares, “Automatic was the definite pivotal point that changed everything for us as a band, it just had this extra ‘it factor’ that we had been searching for when finding our voice as a band, while still holding true to the sonic elements that created LEVARA. This is the beginning! We’re excited for everyone to start this journey with us!  And, for those already listening, sharing, and being a part of this journey, we could not be more thankful than we are for your support. Over time, we plan on reaching every corner of the globe to perform these songs.”

Prior to recording their debut, the band toured the United States several times and supported Toto on an arena tour in 2019. While in Europe, they staged several headline appearances across Germany and other countries, floored by the response with fans coming out at every date.  In Early 2020, they began their collaboration with Producer Ethan Kaufmann at Elephant In The Room Studios in East Hollywood. The album unequivocally captured the magic they sought to see take life.

“I believe LEVARA is a band that can spark an influence for young kids and people of all ages to pick up an instrument and feel that connection,” Trev Lukather  concludes. “At the same time of singing along to anthemic, feel-good, and emotional tunes, you can incorporate the heart and soul that started music in the first place. We want to inspire our generation and the next to want to pick up a guitar, pick up a bass, pick up drum sticks, or go for those high notes vocally.  I feel there is a need for epic ‘pop’ tunes to have that musicianship behind them like the classic bands we all love and admire. I believe we accomplished that with our album. If we can influence that in any way, we are winning.”

A confirmed itinerary of appearances planned for late-Spring continues to be impacted by the global pandemic.  Details will be forthcoming.