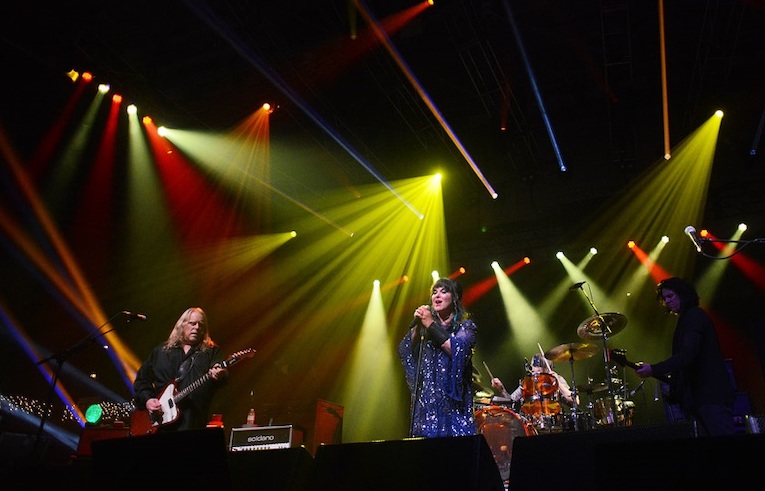 Part of the Twilight Concerts Under The Stars Series

Due to Overwhelming Demand

(New York, NY – March 29, 2021) — Due to overwhelming demand, Gov’t Mule has announced a third and final show at Westville Music Bowl in New Haven, CT on Sunday, May 2nd featuring a special guest appearance by Ann Wilson of Heart who previously performed with the band in 2017 at LOCKN’ Festival and Warren Haynes’ Annual Christmas Jam. The newly added Sunday show will start at 6pm (doors at 4pm).

The band’s initial shows, set for Friday, April 30th and Saturday, May 1st, sold out instantly upon on-sale last week. Gov’t Mule’s 3-night run at Westville Music Bowl is part of the venue’s socially distanced Twilight Concerts Under the Stars series, the first-ever events at the venue which recently was converted from the Connecticut Tennis Center to an outdoor music and comedy venue. The upcoming shows also mark Gov’t Mule’s first performances since the band’s annual Island Exodus event in January 2020 in Jamaica and their first in the United States since the acclaimed quartet’s annual New Year’s run at the end of 2019 with two back-to-back nights at The Beacon Theatre in New York City.

Pre-sale tickets will be available on Thursday, April 1st at 10am exclusively for ticket holders for the first two shows. Passwords will be emailed to addresses used to buy those tickets on Wednesday, March 31st. General on sale begins Friday, April 2nd @ 10am, PRESS HERE to purchase. 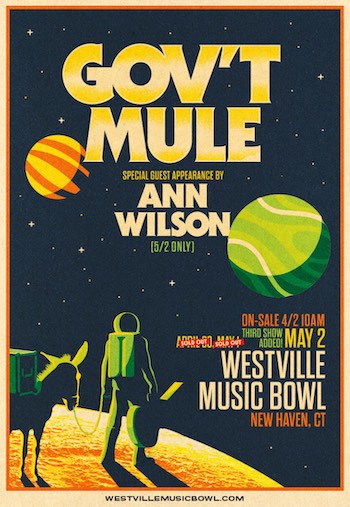 This past fall, GRAMMY Award-winning vocalist, songwriter, producer, revered guitarist, and Gov’t Mule front man Warren Haynes along with bandmate Danny Louis performed seven sold out shows in Morris, CT at South Farms, including the 2020 Twilight Concerts on the Farm season closing finale. It is only fitting that Gov’t Mule would kick off the new Twilight Concerts Under the Stars series at Westville Music Bowl as the venue brings the safety-first music event to new levels by transforming the former tennis venue into a true concert experience with stadium quality sound, lights and video.

“We are overwhelmed by the response to the first 2 shows,” shares Haynes. “Once those sold out, we were asked about doing a third.  The only obstacle was a previously planned recording session with Ann. Once we started to discuss it more, we realized the solution was right in front of us. The 2 times we’ve played live with Ann have each been really great and we’ve said we’d do it again whenever the time was right—this is certainly that occasion and we’re looking forward to it.”

Located on the grounds of the Yale Athletic Complex in the Westville neighborhood of New Haven, Westville Music Bowl becomes a prime New England destination for national touring artists. Seating will be sold in sets of 2 and 4, with a minimum of 6 feet social distance from other seats. Floor seats will be sold exclusively in sets of 4. Westville Music Bowl will have a large variety of local food including offerings for vegans and those with dietary restrictions, as well as a full bar with beer (local/craft, domestic and import), wine, cocktails and soft drinks available.

Safety is the top priority, and both shows will comply with the most current health and safety standards per state regulations and local jurisdictions in order to protect guests, artists, crew and staff. Face masks are mandatory when entering, exiting, and traveling throughout the venue to restrooms or concession areas. Staff are required to wear masks at all times, while security will be on site to enforce social distancing etiquette. Masks are not required while in Guest Seating, however in accordance with Executive Order No. 7NNN: “Effective immediately, any person in a public place in Connecticut, whether indoors or outdoors, who does not maintain a safe social distance of approximately six feet from every other person shall cover their mouth and nose with a mask or cloth face-covering.” Everyone entering the venue, including guests, artists, crew and staff will be health checked including a temperature check and short questionnaire. For more information, please visit www.westvillemusicbowl.com.

Last week, Gov’t Mule released a new live album, Live At The Cotton Club / Atlanta / February 20, 1997, the third release in their streaming-only series via Evil Teen Records – PRESS HERE to listen and PRESS HERE to watch the teaser video. The brand-new live release features Gov’t Mule’s original line-up and was recorded in Georgia where the band was formed by front man Warren Haynes and bassist Allen Woody, as a side project of The Allman Brothers Band when they were off tour, and drummer Matt Abts.