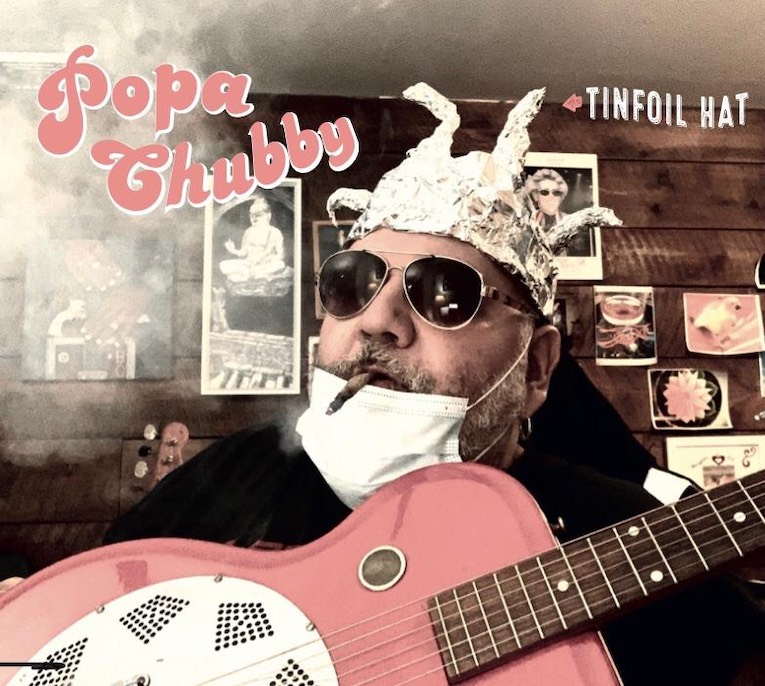 An imposing physical presence is not the only outsize feature of Popa Chubby. The singer and guitar-slinger from the Bronx, also known as Ted Horowitz, has for 30-plus years projected a colorful and compelling persona built on songwriting smarts, instrumental virtuosity, and soul. If that hasn’t exactly made him larger than life, it has helped him rise above the clichés and conventions of the blues-rock genre.

It’s no different with his new album. Out March 31, 2021 Tin Foil Hat is Popa Chubby’s lockdown record, recorded in pandemic-induced isolation in New York’s Hudson Valley with the  artist himself playing all the instruments. On it he conveys the disparate emotions stirred by the past year, and his reactions to these most trying and turbulent of times carry a universal resonance.

There’s anger aplenty in “No Justice No Peace,” inspired by the Black Lives Matter protests. It starts slow and ominous and builds to a real rabble-rouser, with Popa Chubby also taking aim at the then-occupant of the White House, who is also the target of the sneering “You Ain’t Said Shit.”

On “1968 Again” accented by acoustic slide guitar rather than the electric guitar that dominates here, Chubby notes the similarities between that momentous year of war, assassination, and civil unrest and the events of 2020. And on the title track, he deftly skewers the proudly ignorant, those who disdain science and facts: “My GED is now a Ph.D.,” he sings, giving voice to one of his subjects over a snarling blues-rock riff. Keeping up the badass approach, he segues right into the swaggering “Baby Put On Your Mask.”

But it’s not all anger and alienation. “Someday Soon (Change Is Gonna Come),” which echoes the title of Sam Cooke’s 1964 civil rights anthem, sees reasons for hope (“There’s a change in the weather”). And the anthemic and open-hearted “Can I Call You My Friends?” sees human bonds that transcend any divides.

“Embee’s Song,” meanwhile, takes a break from all the outside noise. It starts as a delicious slice of sweet soul before Popa Chubby goes more Otis Redding, turning into a pleading suitor: “Let me love you, baby!” “Cognitive Dissonance” is pure reggae, with Popa Chubby’s guitar weaving around the hypnotically pulsating rhythm. Maybe he goes a bit too far with the Jamaican accent, but the track is just the most extreme example of the way he mixes things up musically. Even when he’s just working variations on his blues-rock base, he keeps the music fresh.

“Boogie for Tony” is a propulsive instrumental that  showcases Popa Chubby’s fleet-fingered dexterity. As usual, however, he eschews flash. He keeps his playing – whether it’s dirty or lyrical – in the service of the song. Thus his solos tend to be short and to the point. The one in “Tinfoil Hat,” for instance, echoes the stinging nature of the lyrics and delivery, while the one in “No Justice No Peace” captures the song’s mixture of anger and pain.

The number that probably best captures the dystopic gloom of the times is “Another Day in Hell,” a slow, heavy blues-rocker that incorporates a sardonic rap. It’s a load to endure, as Popa Chubby chronicles, but rather than succumb to despair, he vows to rise above it, driven by his mission to bear witness to it all. It underscores the spirit of resiliency that pulses through this entertaining and energizing album.