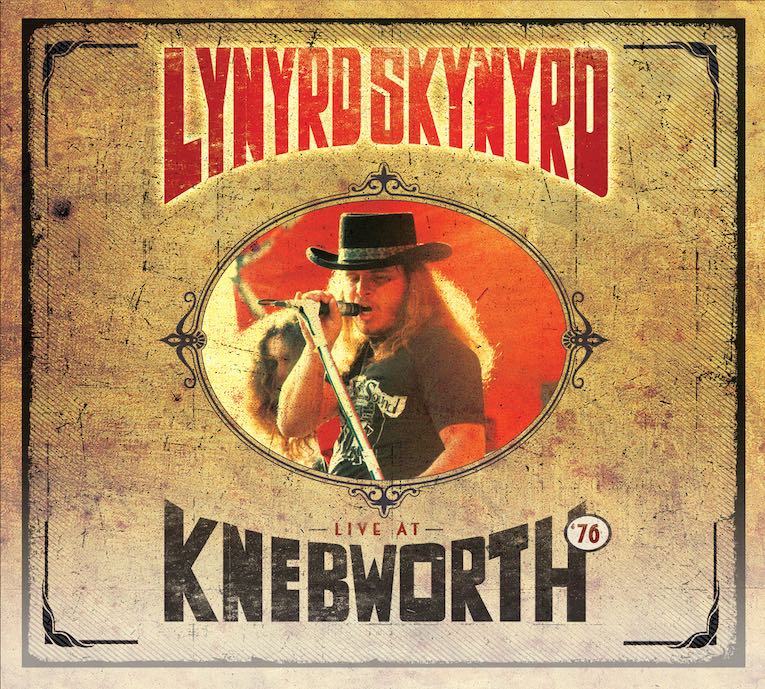 Get fired up, southern rock fans because Eagle Rock Entertainment is set to drop Lynyrd Skynyrd: Live At Knebworth ‘76 on April 9th, 2021, a DVD+CD, Blu-ray+CD, limited edition 2LP+DVD, and digital video release that captures the band’s historic show in England on August 21,1976 in a long-awaited concert film. Long considered by Skynyrd aficionados to be one of the group’s best sets ever, the Knebworth gig presents the band’s most revered lineup putting down the pure, undiluted concert experience of a lifetime as it happened on that day in its entirety. It was a powerhouse show performed for more than 150,000 festival attendees present to see a full day of outstanding music that included Todd Rundgren’s Utopia, 10cc, and headliners The Rolling Stones. Skynyrd was in top form in 1976 and this was one of the days that cemented their reputation as one of rock’s most formidable live bands. Seeing the group play at their zenith on a beautiful, clear afternoon on such a huge festival stage is an unforgettable adventure, even this long after the fact.

What’s cool about this set is that it’s the first time this show has been released as an uninterrupted whole. This footage was originally only available as part of the 1996 film Freebird…The Movie and was intercut with interviews and other performances. Lynyrd Skynyrd: Live At Knebworth ‘76 gives Skynyrd fans prime seats for an epic hour-plus set of the band’s best material on a day when everyone onstage could do no wrong. The mighty core of Ronnie Van Zant (Lead Vocals), Gary Rossington (Guitar), Allen Collins (Guitar), Steve Gaines (Guitar / Backing Vocals), Leon Wilkeson (Bass / Backing Vocals), Artimus Pyle (Drums / Percussion), and Billy Powell (Keyboards / Piano) absolutely rages throughout the show, aided by backup vocal group The Honkettes (Cassie Gaines, JoJo Billingsley, and Leslie Hawkins). It’s an outstanding example of 70s rock on the grandest-possible scale and we’re fortunate to finally get to enjoy it as it went down.

The set list is a litany of Skynyrd’s most popular songs, as you’d expect on such an important day. The group tears into the opener “Workin’ For MCA” with energy to spare and gets the massive crowd on its side at once. The three guitar attack of Rossington, Collins, and Gaines is fierce and muscular and singer Van Zant paces the stage in all black like a boss. The band is fully tightened down and plays like a single organism created only to play incredible rock and roll. “I Ain’t The One” and “Saturday Night Special” are just as strong and perfectly executed. Seeing each musician dig in and hurl their notes out over the gathered throng of listeners makes it plain how big of an event this was. The crowd obviously feels the same way about seeing this already-legendary band on UK soil and responds with equal fervor.

“Whiskey Rock-A-Roller” is upbeat, inspired, and gives the crowd a taste of Skynyrd’s bar band roots. It’s a boot-shuffling good time and shows off the deep pocket the rhythm section of Artimus Pyle and Leon Wilkeson could generate. “Gimme Three Steps” tells it’s familiar barroom tale of dancing with the exact wrong girl with grit and enthusiasm, as if they’d ever do it any lesser way. The blues jams of “Call Me The Breeze” and “ T For Texas” are great fun and full of hot playing on every instrument.

“Sweet Home Alabama” is obligatory and well-received as the radio hit and the scorching version of “Freebird” that concludes the show is everything it could ever be and more. The sight of Allen Collins dressed all in red wailing away on his Gibson Explorer in front of that band and that huge audience is one of the best “living the dream” rock star moments ever captured and it’s impossible to not get caught up in it. There wasn’t another note that needed to be played after that and everyone on the premises knew it. Lynyrd Skynyrd left everything out there on the stage that long-ago day in 1976 and gave all those lucky enough to be there a story they are probably still telling. Lynyrd Skynyrd: Live At Knebworth ‘76 is a must-have set for every serious Skynyrd fan in existence and delivers an unforgettable knockout punch. To watch it is to wish you could have been there.