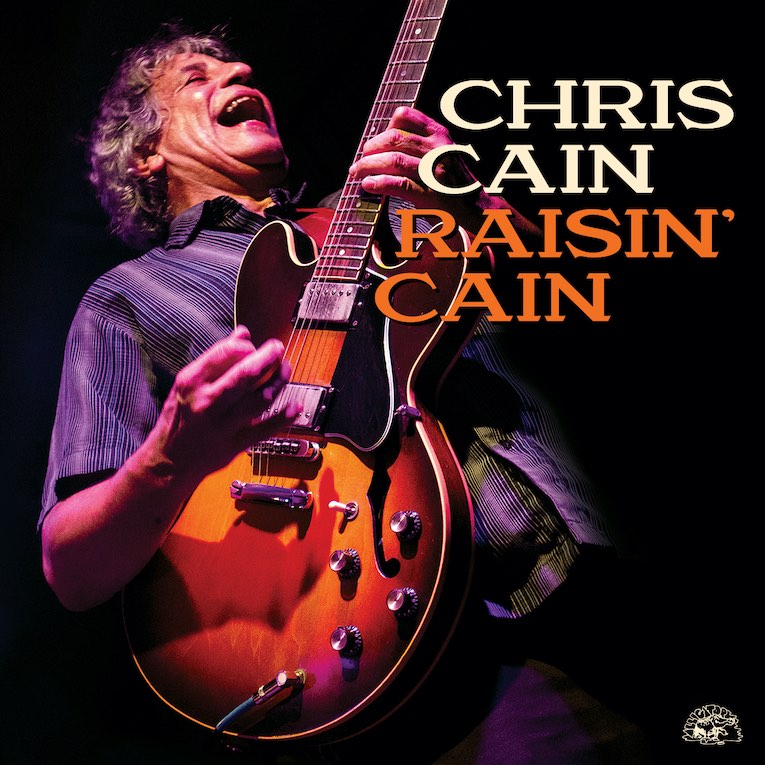 Chris Cain gives blues fans his best and then some on his new album Raisin’ Cain. The set comes out April 9th, 2021 on Alligator Records and is Cain’s first for the legendary blues imprint. It shows us a mature artist, master blues guitarist, singer and songwriter entering a new stage of his creative career, one marked by exceptional original songs with universal meaning and a potent guitar style that draws on the past but doesn’t live there. Cain’s tunes are danceable and funky, his vocals are engaging and wise, and his guitar tone and phrasing are impressive and beyond reproach. Raisin’ Cain was tracked in San Jose, California at producer and multi-instrumentalist Kid Andersen’s Greaseland Studio, which has been a hotbed of great music these past few years, and truly captures the essence of Cain’s highly developed contemporary blues sound. Cain is a 2021 Blues Music Award nominee for “Best Contemporary Blues Artist” and “Best Blues Guitarist.” Cain is regarded as one of the great blues guitarists of his generation.

Cain initially burst onto the blues scene in 1987 with his debut effort Late Night City Blues and has been carving out a reputation as a performer of the highest order ever since. His inspiration comes from all-stars like B.B. King, Albert King, Ray Charles, Albert Collins, Grant Green, and Wes Montgomery but, over the course of 15 albums, Cain’s music has grown into something that could only belong to him. His vocals show traces of Curtis Salgado, Gary Smith, and jazz/blues singers like Jimmy Witherspoon and Big Joe Turner and he’s also a fine keyboard and saxophone player. He studied music in his hometown at San Jose City College and soon he was part of the faculty teaching jazz improvisation. This varied background gives Cain an unlimited palette to draw from and is the bedrock of his instantly-identifiable sound.

Raisin’ Cain leaps into action with the funky and humorous “Hush Money.” It’s a world-weary song about the high cost of marital bliss and living with a bad decision set to a most-happening R&B-informed groove. Cain’s voice is big and expressive and his guitar lines are tight and sophisticated. His lyrics are inventive and fresh, as are the ways he structures the track and arrangement. Slick horns and a dose of wah-drenched rhythm guitar add some tasty flavors to the mix but the lightning here is all Cain.

“You Won’t Have A Problem When I’m Gone” rubs a sweet shuffle feel and tells another story of love trouble, wasted years, and mean mistreatment. Cain’s vocals are emphatic and bold as he speaks his piece and his guitar work says everything that his voice cannot. Again, he also takes liberties with the song form, avoiding the 12-bar trap in stylish ways that do much to keep the listener focused. It’s a great straightforward blues song backed by enough artistry to let it exist in its own space. “I Believe I Got Off Cheap” is a hard funk/blues cut about another case of domestic blisters cured by a couple of surprise bus tickets out of town. Drummer Derrick “D’mar” Martin (Rick Estrin and the Nightcats) delivers the goods here as does bassist Steve Evans and the two keep the song hot from beginning to end.

“Out Of My Head” is a swinging jazz/blues track that elevates Cain above the typical yet again. His guitar work on it is confident and colorful and finds an ideal foil in Greg Rahn’s organ lines. This is one of those songs that overwhelms a crowd in a live setting with fire and motion and everyone on it helps make it stick. Be sure to hang out until the end to catch Cain’s star turn on the ARP Soloist synthesizer on the closing cut “Space Force.” Chris Cain is deeper water than most artists making the scene today and has made a lifetime best album with Raisin’ Cain. Blues fans looking for something new that still gets their shack shaking are about to fall in love.

Thanks to 1AnitrasDance for the video