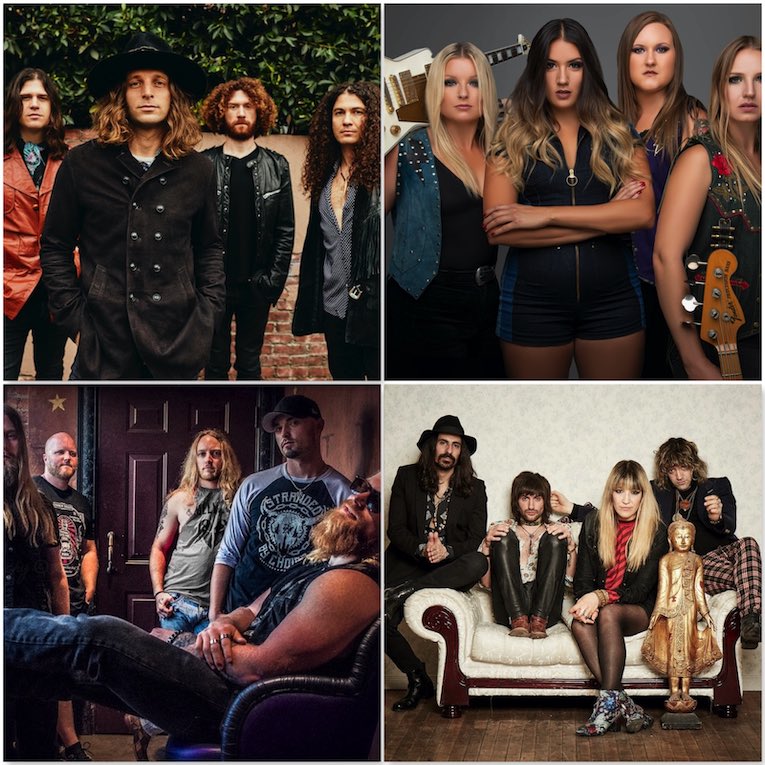 Live music is starting to come back! What better way to celebrate seeing concerts again than checking out 12 modern rock/rock and roll bands to place on your “must see” list for 2021 and 2022.

There’s nothing like rock/rock and roll cranked loud to blast out the cobwebs from a very long pandemic year. So, get ready. You’re about to embark on some great music from the U.S., UK, Scandinavia and other parts of the world.

Each of these 12 modern rock/rock and roll bands is hand-picked, not served up by promotors in hopes of gaining streams or placement on playlists. I genuinely think very highly of these bands and each of the songs included with their information and websites, is chosen carefully. A few I’m sure you know about and others you probably don’t. Each one I’d love to see live myself.

I didn’t include rock giants because you’re familiar with them already and they’re probably in your music collection.

For the most part, you won’t find head-banging rock, heavy metal or arena rock in this list. Most have a blues base, hints of old school rock, or there’s something unique about them that sets them apart.

This is real music by real musicians. A few of these bands are fairly well known and others are on the crest of the upward swell. Either way, each demands to be heard at peak volume to savor the quality of the songs and musicianship.

And at the forefront of rock/rock and roll? Guitars! We love them, we play them.

Rock Ain’t Dead. Not by a long shot. Even though pop, hip-hop, and rap are on trend, rock is the #3 genre and climbing, depending on which rating system you consult. I still believe the pendulum will swing away from manufactured music and more toward real music, and more to the point, rock/rock and roll music. And that’s not just because I love it.

Dirty Honey
If you haven’t heard of Dirty Honey, it’s time you did. They are one of rock music’s most exciting new bands. They have a new self-titled album coming out April 23, 2021 and I can guarantee you it’s killer. Dirty Honey is one of my favorites and has been since 2019 when they released their self-titled EP. Led by vocalist Marc LaBelle, guitarist John Notto, bassist Justin Smolian, and drummer Corey Coverstone, the new album was produced by Nick DiDia (Rage Against The Machine, Pearl Jam). This band has captured lighting in a bottle with their blues infused, nasty rock and roll.
Press Here For Dirty Honey Info and Video

The Cold Stares
Originally from Western Kentucky, the band is composed of guitarist Chris Tapp and drummer Brian Mullins. They are authentic, blues-based rock/rock and roll with powerful vocals and outstanding songs. They have a new album coming out later in 2021 via Mascot Records and have hints of SRV, Black Sabbath, Soundgarden, The Black Crowes, Free and Led Zeppelin. They have toured nationwide alongside Rival Sons, Spoon, Big Head Todd and the Monsters.  Their single “Hard Times” is their first release since their 2019 album, Ways.
Press Here For The Cold Stares Info and Video

Black Top Mojo
From Palestine, TX, modern rock band Blacktop Mojo is a fiery blend of heavy grunge grooves, classic guitar riffs, and Southern metal. The band was formed in 2012 by vocalist Matt James and drummer Nathan Gillis. With one of the best rock vocals today, Matt James is soulful, powerful, and the band hits hard. Somewhere between Soundgarden and Lynyrd Skynyrd, the band has an edgier feel. After their debut album I Am in 2014, the band teamed up with famed Muscle Shoals Sound producer, Jimmy Johnson (The Rolling Stones) and released their sophomore effort, Burn The Ships in 2017. In 2020 the band released their EP, Static. They are currently working on their fourth album, out later in 2021.
Press Here For Black Top Mojo Info and Video

Laura Cox
French rock guitarist and vocalist Laura Cox and her outstanding band, released their newest album, Burning Bright in November 2019. On the edge of the new classic rock movement, Cox is a first class guitar player and singer. Cox first became known by her guitar videos on YouTube in 2008. Fiery guitar playing and pure rock vocals, made her an internet sensation.  A fierce rocker, Laura Cox is the real deal. We look forward to more releases from her and the band.
Press Here For Laura Cox Info and Video

Stone Horses
With a modern rock groove, Stone Horses are a rock band from Washington D.C., influenced by Led Zeppelin, Royal Blood, Black Sabbath, Jack White, The Black Keyes, and Jimi Hendrix. A perfect blend of swamp rock, dark melodies, huge choruses and witty lyrics, their first single “Reckless Ways” from their sophomore EP, Good Ol’ Days, made it to the Top 40 charts and landed them tours with Slash, Myles Kennedy and the Conspirators, Rival Sons and more. Guitarist T.M. and singer John Allen draw from early blues pioneers and blend their influences into a modern rock sound.
Press  Here For Stone Horses Info and Video

Black Stone Cherry
From blues/rock to more heavy hitting rock, Black Stone Cherry released their seventh studio album, The Human Condition on October 20, 2020 via Mascot Records. The band moved into beefy rock territory with ferocious guitar riffs, powerhouse vocals and a full velocity sound. The album was tracked right before the pandemic and the band achieved their goal of epic performances, slamming drums and glorious hooks. A straight up rock album that boasts their unique sound, Black Stone Cherry is one of my favorites.
Press Here For Black Stone Cherry Info and Video

The L.A. Maybe
The L.A. Maybe is a six-piece rock and roll band from the Carolinas. Lead vocalist, Alvi Robinson, lays down gritty passionate vocals and the band backs him up with slithering riffs, catchy hooks and ripping guitar solos. Their debut album, Dirty Damn Tricks out March 26, 2021, is the New Wave of Classic Rock and proudly reveals the bands influences of AC/DC, Van Halen and Guns N’ Roses. They build their foundation on elements of rock and roll with big, greasy riffs, catchy hooks and soaring vocals.
Press Here For The L.A. Maybe Info and Video

Rival Sons
I hesitated to include Rival Sons in this article because they are one of the hottest modern rock bands around and well known. But I did anyway just in case some of you aren’t aware of them. Their latest and sixth album, Feral Roots(2019) was produced by Dave Cobb. From Long Beach, CA, Rival Sons is made up of guitarist Scott Holiday, vocalist Jay Buchanan, drummer Michael Mikey, keyboardist Todd Ogren, and bassist David Beste. The band’s website features their own new record label so don’t be thrown off. I believe they’re still around.
Press Here For Rival Sons Info and Video

The next article will be on Southern Rock and Roots Music.

We welcome your comments. Please place below in the comment section