Review: ‘You and Me’ by Nancy Wilson 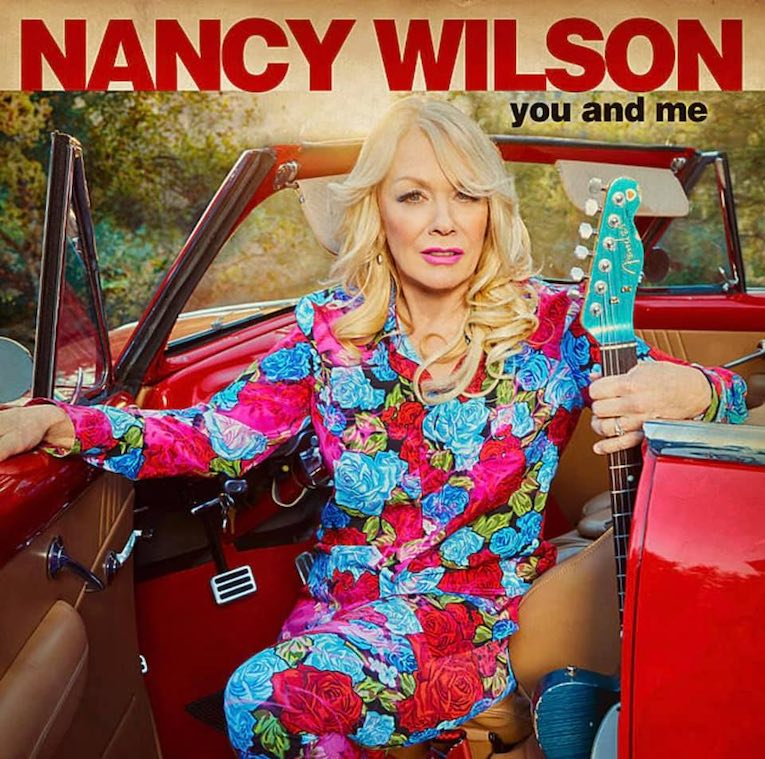 Rock and Roll Hall of Fame inductee and co-founder of Heart, Nancy Wilson steps out strong on her first-ever solo album You and Me. The much-anticipated platter comes out May 7th, 2021 on the Carry On Music imprint and contains a tight mix of original and cover songs that are compelling, literate, and meaningful. A fine guitarist, vocalist, and creator, Wilson made the record in her home studio in sunny California, tracking all the other musicians involved remotely due to the pandemic. Some of those musicians include special guests Sammy Hagar, Duff McKagan of Guns N’ Roses and Taylor Hawkins of Foo Fighters. Wilson’s sound here is poetic and intimate, eschewing the Zeppelin-esque hard rock of Heart for a singer-songwriter vibe that feels genuine and authentic. She gives us eight new original songs on You and Me as well as reworked versions of classics by Bruce Springsteen, Simon & Garfunkel, and Pearl Jam.

Nancy Wilson is known and respected worldwide as a co-founder of and guitarist for Heart, one of the great multi-platinum bands of the classic rock era. Alongside her sister and lead singer Ann Wilson, Nancy helped Heart sell over 35 million records, put ten albums into the Top Ten, receive four Grammy nominations, and become part of The Rock and Roll Hall of Fame. Wilson is also a prominent film composer and has written scores for movies including Say Anything (1989), Jerry Maguire (1995), Almost Famous (2000), Vanilla Sky (2001), and Elizabethtown (2005). Her career has been one of smashing glass ceilings and succeeding as a guitar-slinging female in a time when that seldom happened. One way or another, you’ve been listening to her your whole life.

Nancy begins her solo-album journey with its title track “You and Me.” The song is a tender ballad that speaks to Wilson’s deceased mother and was co-written and recorded with her longtime collaborator Sue Ennis. Wilson’s fingerstyle acoustic guitar is crystalline and free-flowing, providing perfect support for her beautifully plain-spoken lyrics and vocal performance. Wilson grandstands nothing here, delivering an almost-indie-rock melody and intensely personal lyrics in a peaceful, conversational way.

Wilson’s cover of Bruce Springsteen’s “The Rising” is everything we all need it to be. She handles the emotive anthem well, putting forth an uplifting and inspiring message that flies in the face of the dangerous times we’re living in. The track is rendered in guitar, keyboard, and mandolin colors that are human and warm. Again, Wilson doesn’t force the vocal and simply lets the song’s greatness assert itself. Her choice to include this song on the album adds a certain persuasive gravitas to the set that’s compelling and soulful.

Nancy also takes on Pearl Jam’s iconic 90s hit “Daughter” and gives it a refreshing female perspective. She lets her rock and roll self out on this one, putting down a heavy, atmospheric groove with muscle to spare. The Red Rocker Sammy Hagar pops in for a charming duet on the Simon and Garfunkel chestnut “The Boxer” that will bring all the folk/rock fans to the yard in a hurry. The track is hypnotic, spacious, and nothing like the music Wilson and Hagar normally make. Don’t miss it. Duff McKagan and Taylor Hawkins are the mighty rhythm section underneath the Wilson original “Party at the Angel Ballroom.” The song is an energized, big-vocal epic rocker with an old-school feel that will stick with you all day.

Perhaps the most heartfelt moment on You and Me is the closer “4 Edward.” It’s a brief acoustic solo piece meant as a tribute to the late Eddie Van Halen, one of Nancy’s pals from the old days. It’s a gorgeous cut that echoes some familiar EVH themes and techniques and comes off as a labor of love meant to honor the greatest rock guitarist of all time as well as a fallen friend.

Nancy Wilson is still very much a rock star and proves it throughout You and Me. Her ideas and execution can still make waves at the highest levels. This record is an outstanding look into the totality of her musical mind and shows that she’s still full of twists and turns. You know you want the album, so get it, already. You’ll be glad you did.

Pre-order link for You And Me