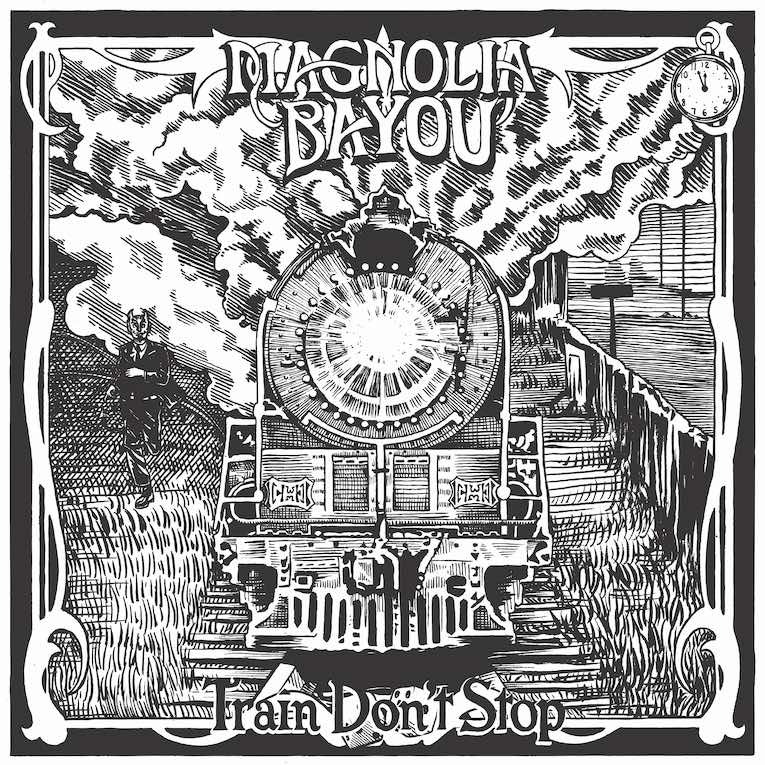 Rock and Blues Muse is pleased to premiere the new video “Train Don’t Stop” by Mississippi blues rockers Magnolia Bayou, a swaggering Southern band whose sound is reminiscent of the golden age of rock and roll. Written by the group, the song was recorded at Natchez Sound Studio, and produced by Burne Sharp. It’s a tough-talking stiletto of a track built around a gravel-filled groove and aggressive roadhouse guitars. This is an absolutely authentic four-piece rock and roll band that’s loaded with tone and tradition but packs the bare-knuckle punch it takes to be relevant in 2021.

Magnolia Bayou says, “A couple of years ago, we had some issues with band personnel. We promptly had a meeting to rectify the issues. During that meeting, our manager made the statement “This train don’t stop for anyone or anything.” Being floored by that statement, singer Drew Fulton jotted it down in his notes for potential use in a future song. Fast forward to 2020 and a worldwide pandemic took the world by storm. The lyric “This Train Don’t Stop” just kept knocking on our door. This song is the 2021 anthem for the people who have just had enough. Despite the odds, we won’t stop.”

Magnolia Bayou was born in the depths of the Mississippi swamps and draws the essence of its sound from the state’s indelible musical history. The band’s latest album, Strange Place, was released September 24, 2020. You can hear echoes of Robert Johnson, Sonny Boy Williamson II, Howlin’ Wolf, John Lee Hooker, Son House, and other iconic Mississippi legends in every beat of the band’s music. The lineup of Andrew Fulton (Vocals, Rhythm Guitar), Dylan Palmiero (Lead Guitar), Josh Estes (Bass Guitar), and Cedric Feazell (Drums, Percussion) punches way above its weight at all times and adds a hard classic rock influence to its soulful base.

The video for “Train Don’t Stop” is a high-energy clip that depicts Magnolia Bayou getting down in a steamy juke joint, doing their best to knock down the walls. Tube amps growl, drums pound, and Andrew Fulton’s intense vocals stand fast at center stage. Watching it really gives you a taste of what it’s like to experience the group up close in a small room playing live off of the floor. The clip is revved up, authentic, and full of the best kind of down-and-dirty fun. Existing fans are going to love it and it’s certain to bring a lot of new friends into the Magnolia Bayou fold.

“Train Don’t Stop” proves that rock and roll is still very much alive, at least in the hands of Magnolia Bayou. When these four plug in and play, you can’t help but believe in them. If you live for loud, passionate blues/rock, you’re going to want to get behind this band and this song. Do yourself a solid and get onboard right now!

“Train Don’t Stop” is available on all streaming/pay platforms.